December 20, 2016 marked the starting of Telltale’s next epic survival horror adventure with the Walking Dead: A New Frontier Season 3 “Ties That Bind.” And, boy we had a blast in the first and second part released since the choice-based cinematic game’s arrival. Once again, with the arrival of the new part, we come across Clementine, the badass young girl with whom the first two seasons of the game series were memorable.

But this time, she is not the protagonist that we expected. Telltale Games has brought up a new character that players will control while moving through the discomforting regions of the fictional world of the “Walkers.” We warn you that the following post contains spoilers on the plots for the Walking Dead Season 3 “Ties That Bind” Part 1 and 2. So, unless you are really interested in knowing what great twists and cliff hangers are coming up, you should avoid reading.

The Walking Dead: A New Frontier Season 3: The Best Plot Ever! Fans Disappointed To Not Be Able To Control Clementine

For the ones who have followed the story so far, The Walking Dead Season 1 and 2 had featured Clementine’s side of story. It had shown how Clementine’s story finished off with her moving off to survive with Kenny and AJ on their own. But, in the “The New Frontier” players take the role of Javi in the first episode of the game who was a professional baseball player recovering from a gambling addiction. We come face to face with his family issues, most specifically with his older brother, David.

Once the troubles with walkers start spreading in their area, he ends up surviving with David’s wife, Kate and her two children Mariana and Gabe. It is assumable from here that the rest of the family was killed by the walkers, including David.

Four years pass and Javi is responsible for the remaining family keeping them alive and on the move in a van that they consider their home – even though it doesn’t offer much privacy to any of them. Gabe being 14 years old is kind of rebellious while Mariana is a little younger than him still relying on others and cooperating as much as possible. Tensions build and break between Gabe and Kate as she is revealed to be his step mother. Moreover, his hormonal changes depresses the rest of the family members from time to time.

While moving through the story in the Walking Dead: A New Frontier Season 3, they come across a trailer which had decent amount of supplies. They plan on staying or moving as per choice of the gamer. While the rest of the family stayed at the trailer, Javi went out to siphon some gas. But, he encounters a group of hostile people who call themselves a part of a group “The New Frontier.” This is where things start to get worse leading to his splitting with his family. From here, we meet Clementine who helps Javi out saving his butt from the gang. Clementine’s Role And Flashbacks: Meeting Characters from the TV and Comic series on the way

We would not want to get too much in the plot as we would like you to enjoy The Walking Dead: A New Frontier Season 3 “Ties That Bind” as well. It’s a great plot even though Clementine acts as a supporting character only. Despite that, she has turned out to be a complete badass during the game story surviving completely on her own.

However, we players didn’t have much clue how she ended up on her own in the previous seasons. So, we do get flashbacks of her story little by little as we move on. Don’t know why TellTale had to give her such a heart-breaking backstory which will unfold in the upcoming episodes of the Walking Dead: A New Frontier. Nonetheless, this is perhaps the best plot among all the games by the game developers. You will love how it unfolds and how we come face to face with beloved characters like Paul Monroe whom viewers know by the name “Jesus.” Who knows who else we might see in the upcoming episode. Maybe Rick would come give a cameo appearance in the game as well.

Clementine’s Fate: Will She Die?

What gamers and viewers feel is that the plot of The Walking Dead: A New Frontier Season 3 “Ties That Bind” is excellent, but at the same time it could turn out depressing as well. Clementine, being a supporting character in this season, might die in this season. Gamers are going to be truly made if that happens and we hope that it doesn’t happen any time soon. 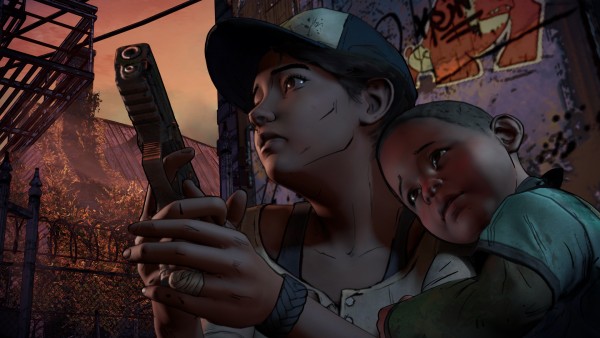 The Walking Dead: A New Frontier Season 3 “Ties That Bind” brings us close to a plot that we have always wanted. After all, it has all the twists and turns that are surprising, depressing, heart-warming and entertaining. We look forward to the next episode in the season called as, “Above the Law.” Oh, we forgot to tell you – for the ones who are not aware “The New Frontier” is what turns out to be “Saviors” gang which is controlled by Negan in the TV and comic series.

Luna’s Howl: An Ode to One of Destiny’s Most Heartbreaking Lore Entries