We recently sat down for a PlayStation Underground play session through a segment of Trials of Mana — an exciting new action RPG that launches April 24.

You might not be aware, but the game’s a full remake of a classic 1995 RPG that originally released exclusively in Japan — Seiken Densetsu 3. The new game has been built with an impressive degree of reverence for the 16-bit classic, alongside fresh new ideas — and there’s a part of the PS Underground playthrough that demonstrates that perfectly: the boss battle against Fiegmund, the Water Benevodon. 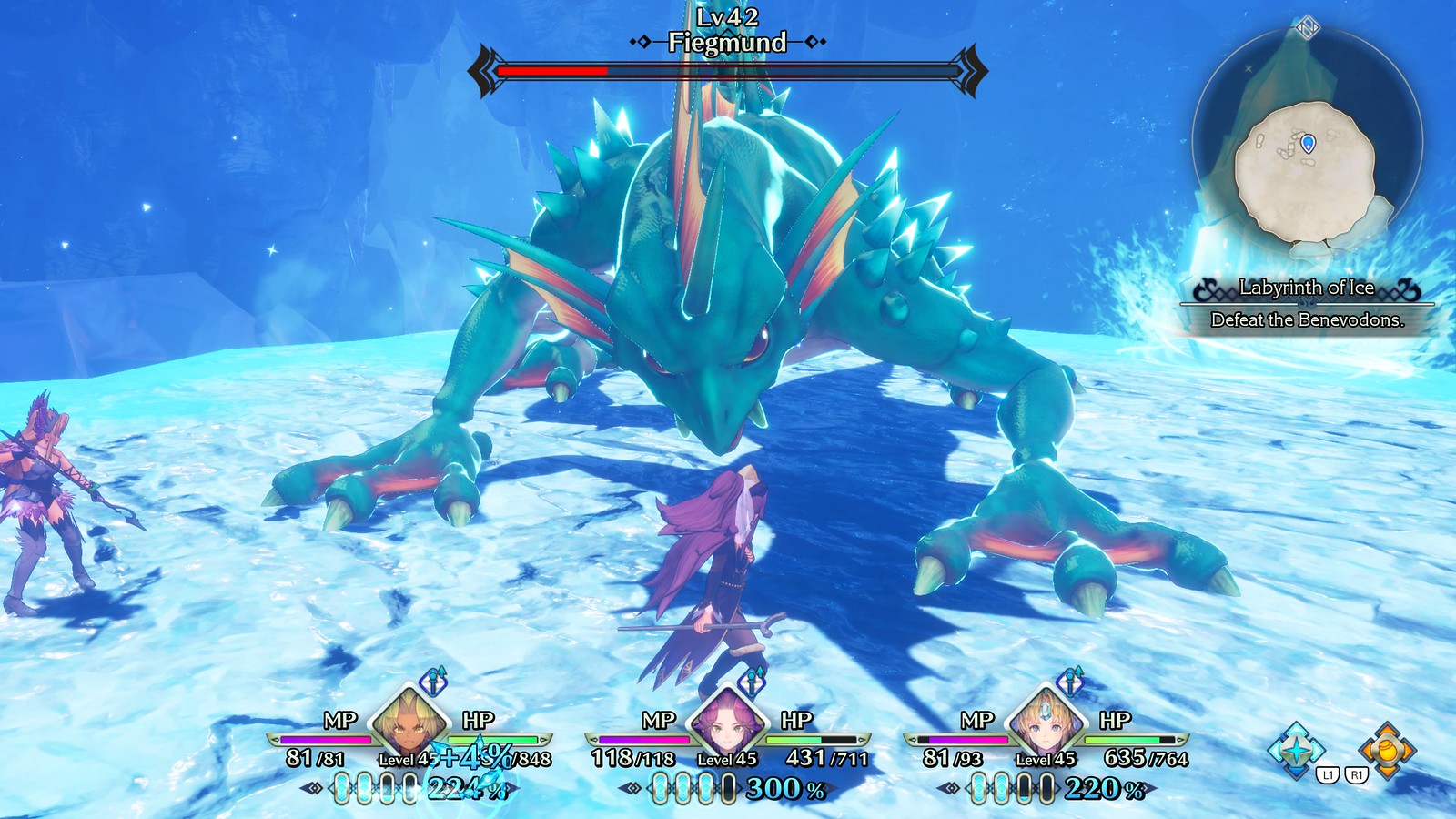 Meet Fiegmund — my how he’s grown!

During Trials of Mana, your party of courageous companions must face off against eight powerful beasts called Benevodons. These are creatures of pure destructive power that once brought the world to the edge of chaos. In other words, they’re bad news. Inside the labyrinthine caves of Frostbite Fields, a particularly nasty example lies in wait — Fiegmund.

Here’s how Fiegmund looked back in 1995: 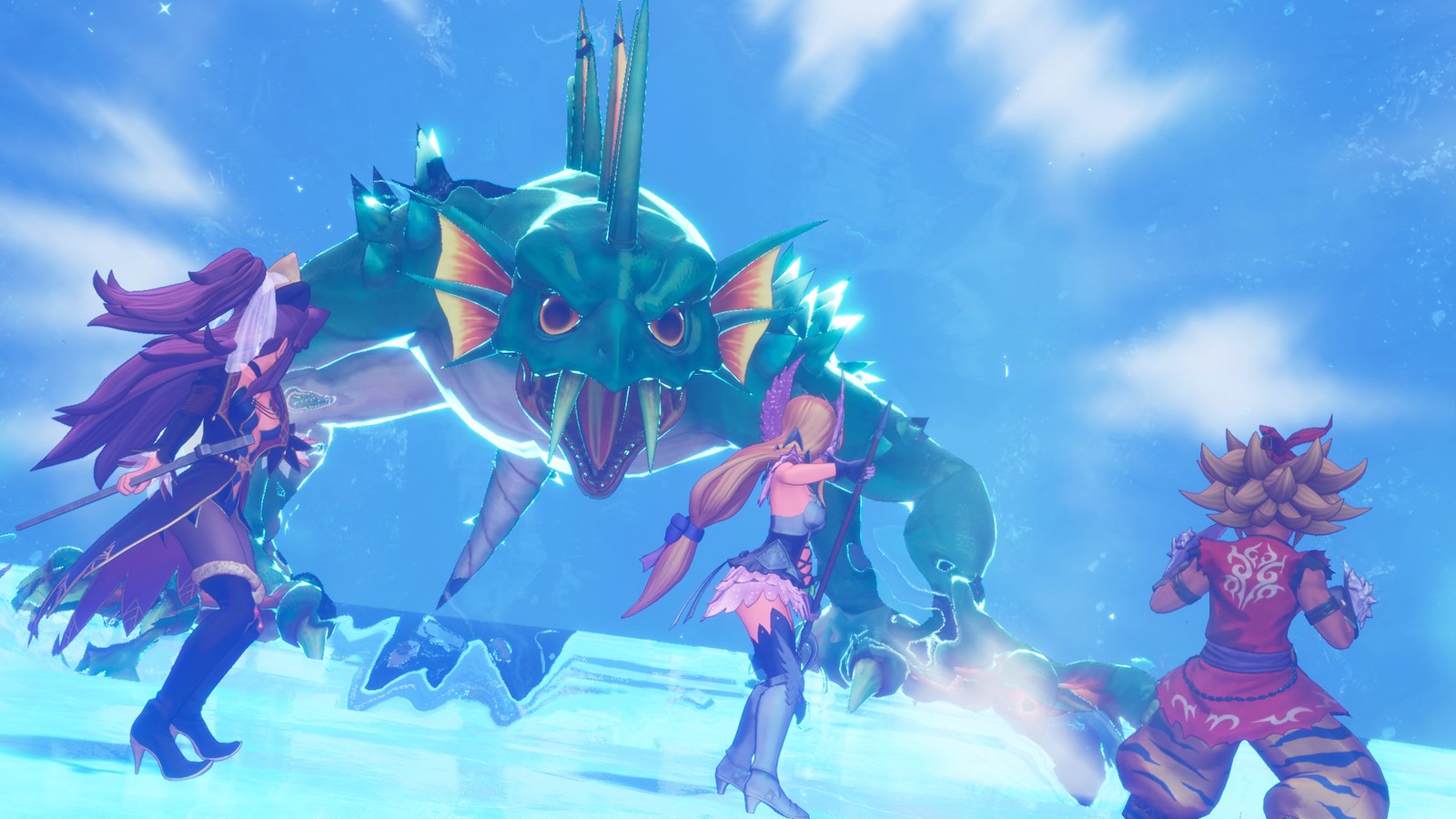 How far visuals have come in 25 years!

Of course, it helps that Fiegmund always looked great. The original Trials of Mana has some first-class sprite work, and that gave the team a fantastic reference point when recreating this fearsome foe. You can see how the new version successfully captures all the key elements, from its razor sharp fangs, to the unsettlingly spiky haunches.

However, adapting a 2D sprite into a 3D model has its challenges. In this concept art we can see how the team had to visualize everything from how the beast’s body would realistically look, to little details like the bottom of its feet! 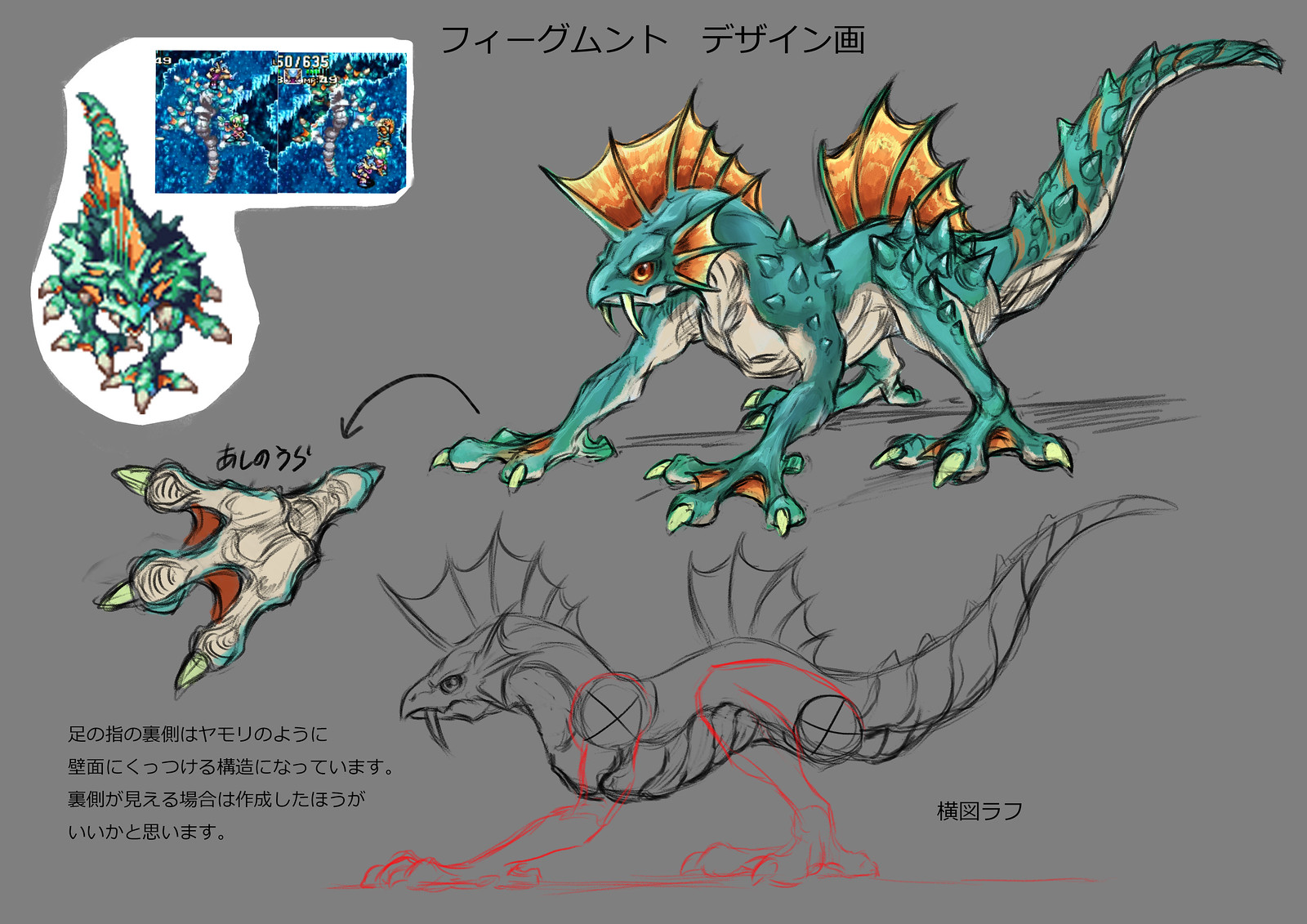 Of course, it’s not enough to make Fiegmund look better — it has to fight in a much more complex way too.

Back in the long, long ago of the 90s, Fiegmund leapt around the battlefield (with surprising grace for something so large). The key to victory was to take every opportunity to deal damage before the brutish Benevodon launched itself out of reach.

That’s still the case in this new version, but the battle also throws in additional complications. Unlike the original game, Fiegmund has three dimensions in which to operate — and it takes full advantage of them. It leaps to the ceiling and sides of the area, staying well out of reach of most of the team’s attacks.

It also throws new attacks into the mix — launching powerful icicles from above and attacking with painful ice attacks.

It’s another brilliant demonstration of how the developers have taken elements from the original Trials of Mana and reinterpreted them through a modern lens. The DNA of the original is there, but the execution is fresh and exciting.

In the PlayStation Underground footage, you can see the team handily beat Fiegmund — but how exactly did they do it? We’ll walk you through some of the tactics they used.

This frigid foe is equipped with many powerful attacks, but the deadliest by far is Frozen Crack.

Fiegmund leaps well out of harm’s way and drops a number of powerful icicles down onto the battlefield. If you fail to deal with these in time… well, let’s just say that you’d best have some healing items to hand (although at least the team shouldn’t have any trouble finding an icepack for their bruises).

Dealing with these powerful icicles should be your priority – and there are lots of ways to do it. In the video, for example, we see Kevin acting as Ice Removal Specialist, using brute strength to take them apart before Fiegmund can launch its brutal attack.

But that’s just one method. Trials of Mana features a lot of flexibility over how you develop your party. For example, you can choose different classes for characters, which let them take on different roles in battle.

In addition to the improved leveling system, there’s also a brand new feature that’s been developed for this version of Trials of Mana – Abilities. After each battle, you’ll earn Training Points, which you can spend on various upgrades to your characters, such as boosting HP or increasing strength.

In our game, Kevin has been built up as a very powerful front-line fighter, but you could choose to spec him very differently (if he’s even in your party at all).

If you were using less physically strong or lower level characters, for example, you could use the game’s tactics system to order your party to attack the same target as you. With their powers combined, your team should be able to whittle those icicles down to shavings in seconds.

There are other strategies you could use too — but we’ll let you work them out for yourself when the game’s out!

With the icicles iced, Fiegmund plummets to the ground. Now it’s stuck on his back, flailing pathetically. You’d almost feel sorry for the beast – at least until you remember it’s an evil entity of ultimate destruction.

Regardless, it’s vulnerable. The party now has a brief window of opportunity to pull out their awesome abilities and magic to deliver some serious damage. By coordinating their attacks, the team is able to send Fiegmund to an explosive end.

When is Trials of Mana out?

That’s just a very brief look at one of the brilliant bosses in Trials of Mana. Hopefully you can see how lovingly recreated it has been — and how the new mechanics and moves that make the battle even more dramatic. That mix of classic Mana series concepts with new ideas sits right at the heart of the whole game.

You’ll be able to experience it for yourselves on April 24 when Trials of Mana releases on PS4.

Preorder now, and you’ll get six exclusive PSN Avatars, as well as a Rabite Adornment — a special accessory that allows you to gain more experience from battles (up to level 10).

Editors’ Choice: Why Astro Bot Rescue Mission is One of the Best Games of 2018