Confront Your Immortal Nemesis in Warframe’s The Old Blood Update

As a former game journalist, working on Warframe has been an eye-opening experience into the development of a living game. Warframe is in constant motion. This six-year-old games-as-a-service title cycles through constant expansion, re-tooling, balances, re-balances, engine overhauls, complete teardowns, you name it.

With Update 26, The Old Blood — our fourth significant update this year — we’re inventing something entirely new by debuting the treacherous, immortal villain, the Kuva Lich (basically, an all-new game system); building a new character with the insatiable wrecking ball of a Warframe, Grendel (the fourth new Warframe in 2019), and layering in new ways to fight by implementing an updated combat system with Melee Changes: Phase 2.

For years, Digital Extremes’ development team has talked about infusing a new, ongoing threat into Warframe, referencing a “Kingpin” or “Nemesis” system. The idea being players would face off against a persistent enemy who poses a growing threat to their in-game existence. In a matter of days, PS4 players will have the chance to create their own bond with this new foe.

“Open zones were a leap for Warframe, and Kuva Liches are another,” says Community Coordinator Helen Heikkila. “The enemy now haunts the player. Lore becomes all the richer when enemies traverse and conquer the Origin System just as Tenno do. Tenno created this new threat and must watch its influence spread like a stain. It’s up to them to decide how it ends.”

To start their “relationship,” Tenno must hunt down a Grineer soldier spiked with Kuva (a mysterious red fluid coveted by Grineer Queens). By landing a killing blow, the Grineer soldier’s death triggers rebirth. In his or her regeneration, these Grineer return stronger, acquiring the specific Ability players used against them, gaining followers (i.e. soldiers), and developing even greater powers. 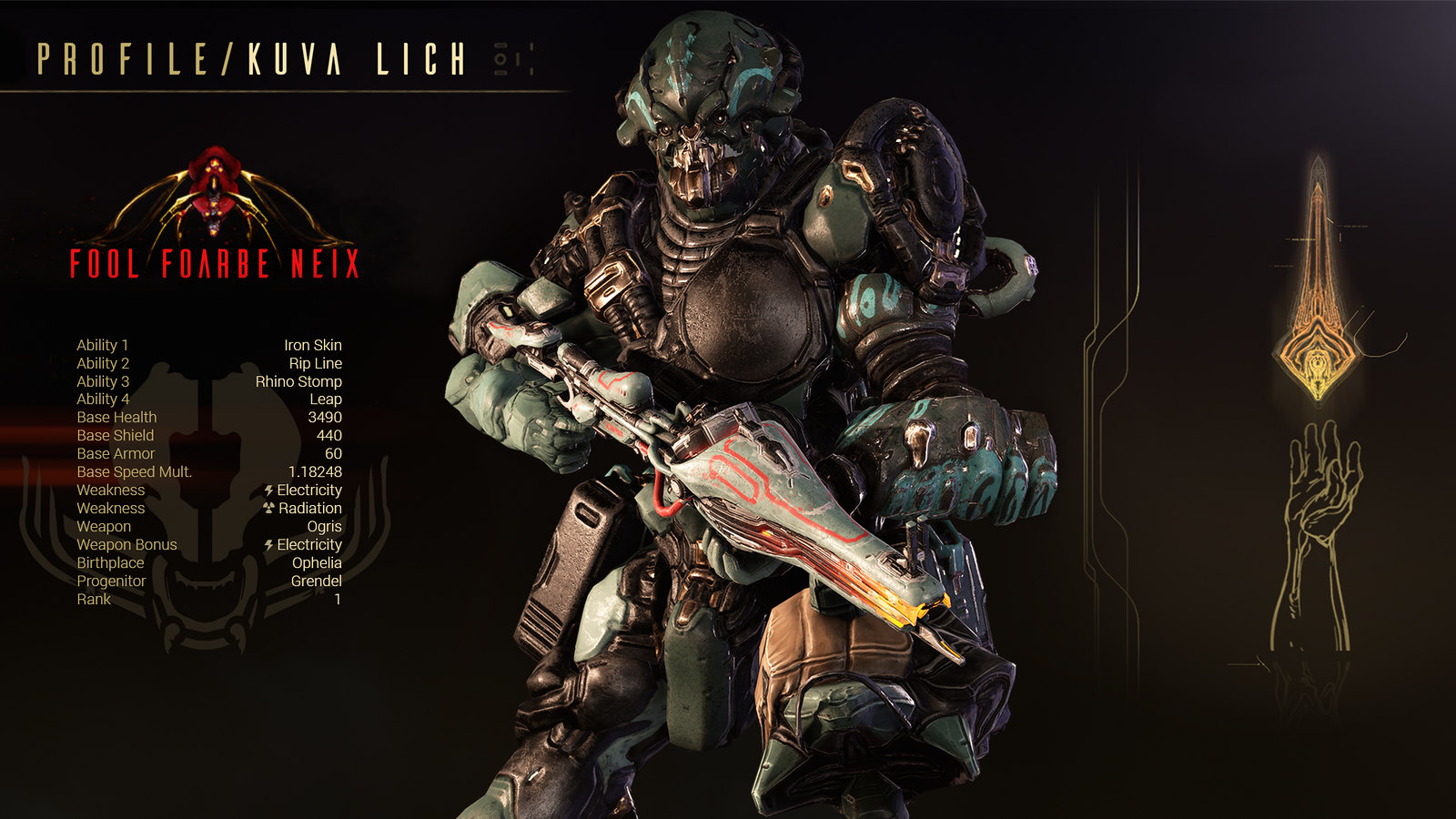 These aren’t just ordinary enemies. Each time a Tenno beats this soldier, the Kuva Lich is assigned a randomly horrific (and sometimes funny) name, like Ogg Horr, Corelikk Airee, or even Gitt Bakk, like that one Beatles song. They have personalities. They deliver quippy dialog to tease and coax players into their next confrontation. They’re given weaknesses, resistances, weapon types, weapon bonuses, their progenitor, a birthplace, and even personality quirks, like cowardice, bloodhound and paranoid qualities, which show up on their profile page.

Megan Everett, Warframe’s Community Manager, believes Kuva Liches bring both new thrills and new anxieties to the game. “I’m always looking around every corner just waiting for my beloved Codokon Gakk to pop in,” she says. “It brings the same excitement of the light flickering Stalker but with a splash of brilliantly written taunts and oh-so-satisfying finisher animations. The possibilities with the Kuva Lich system are vast, so I can’t wait for possibly another Kuva Lich faction (and its 15 friends) to come knocking on my Orbiter door.”

Heikkila agrees, adding: “We’ve always had complicated relationships with enemies in Warframe, but there’s a unique appeal in knowing this enemy isn’t coming for the Tenno; it’s coming for you.”

Then there’s Grendel. Strangely reminiscent of a sumo wrestler in heft and stance, Grendel is born with the ability to inhale and spit out enemies as acidic projectiles. The 42nd Warframe, and the fourth this year (following Wisp, Hildryn, and Gauss), Grendel barrels in to feast on the cruel and corrupted with Abilities such as Feast (eat an enemy or enemies, then spit them out covered in toxic bile); Nourish (take consumed enemies and nourish nearby squad members with a radial buff); Regurgitate (puke bile-soaked enemies as toxic projectiles); and Pulverize (after feeding, Grendel curls into a ball and sends any enemies in his path flying). 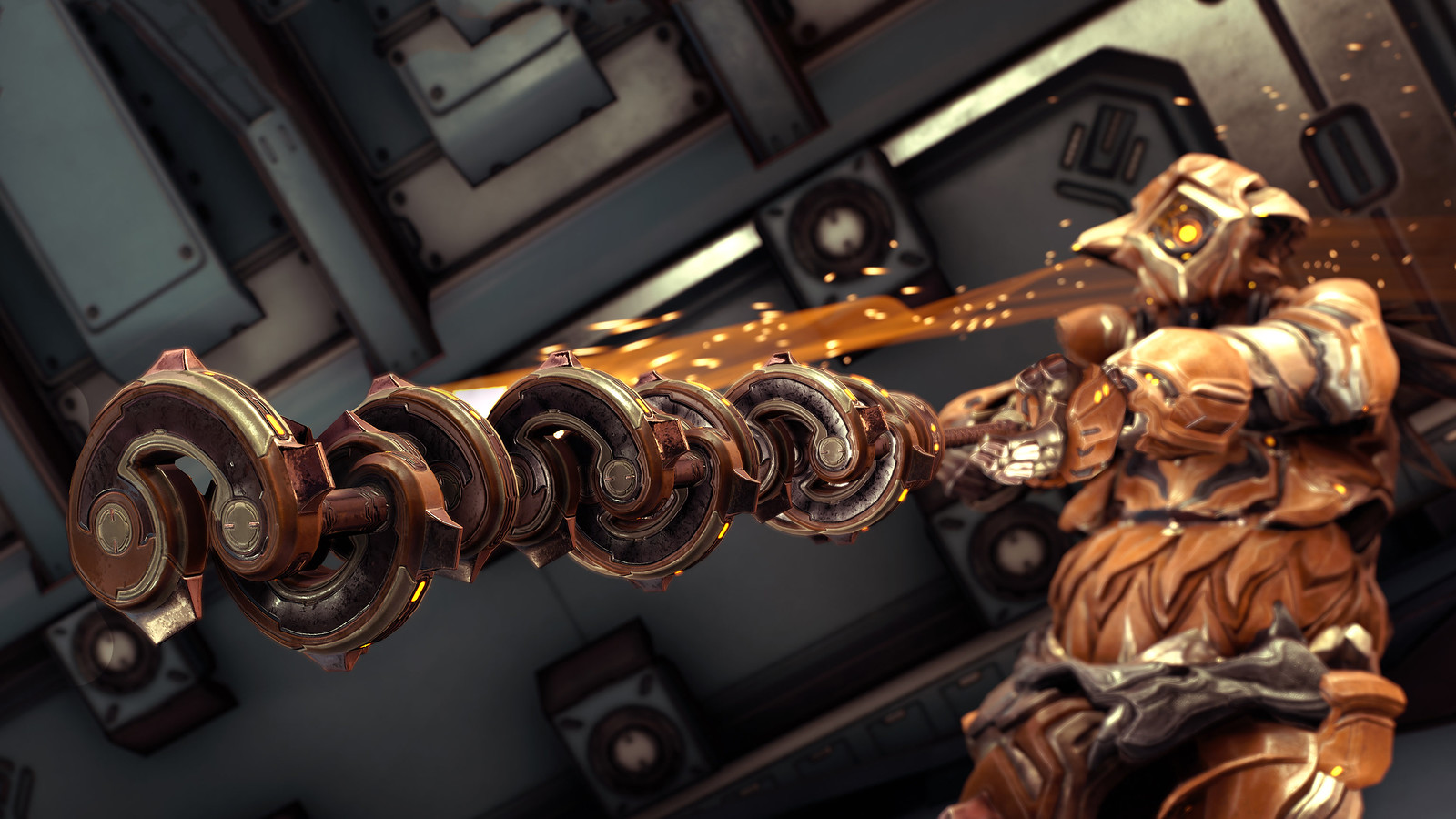 Despite his fearsome appearance, Grendel is a noble spirit whose generosity is matched only by his insatiable hunger. And he’s kind of funny. “I’m a big fan of the humor in Grendel,” says Everett. “He’s literally an insatiable pit with the urge to roll around and regurgitate. With an abundance of Warframes to choose from, it’s nice to get a little silly. Grendel can definitely hold his own amongst his enemies, but I’ll never stop smiling at the sight of my regurgitated enemies displayed before me.”

“The aspect of Warframe I enjoy most is uncovering each Warframe’s unique personality, and Grendel’s is my favorite so far,” says Heikkila. “Things like the Sound Team’s decision to make Grendel subtly say yum after ingesting an enemy adds a lot to the immersion for me. He’s also as tanky as he looks, with a unique self-heal ability I really like. Nothing beats curling into a ball to topple enemies like bowling pins and then opening your entire stomach to feast on them. Yum.”

Last but not least is the heavily updated combat system. Called “Melee Changes: Phase 2,” this next phase brings devastating new combat techniques like heavy attacks and juggle-inducing melee attacks, smoother combos, re-balances, and the return of manual blocking, to name a few. One of our favorites is the mid-air madness created by some melee attacks. Feel like pulverizing an enemy in midair? Send them up and actualize your airborne space ninja dreams!

There’s more, too — new Vauban and Ember reworks, Titania Empress, new Tenno Reinforcements like the Grendel Collection, and our community favorite, the Vasca Kavat, a vampiric space cat you can make into your pet! Whether you’re new to Warframe or an old hand, I reckon you’ll be surprised, delighted, and hopefully humored by The Old Blood. Look for it to hit PS4 very, very soon and let us know what you think below.