Fallout 76’s latest patch is absolutely loaded to the gills with game-changing updates. From One Wasteland – which will let you explore wherever you want, whenever you want, with whomever you want – and the kickoff of the second Season, to the brand-new Daily Ops system – which adds a level of replayability and rewards to the dungeon run experience – Patch 22 is one of our biggest updates to date, and like all our other game updates, it’s all completely free to enjoy. Best of all, it’s available to download on PS4 right now. Dig in below for all the details on what Patch 22 has to offer.

Explore One Wasteland Together

One Wasteland will allow you to explore with your friends like never before, with enemy creature levels dynamically scaling to match each player it encounters. So if multiple people encounter an enemy at the same time, its level will simultaneously rise for the higher-level players and drop for the lower-level players. Creatures will still have minimum and maximum levels, but the flexibility of One Wasteland means you’ll always have a suitable challenge, no matter what your level is.

“When we first launched 76 we endeavored to have a more level playing experience,” says Project Lead Jeff Gardiner. “But with our unlimited leveling system, and crazy build and weapon combinations, that did not turn out to be the case. We originally leveled a zone based on a banded range, but it depended on the first character in the zone. Meaning a zone could be level 20 to 60, which is great if you’re the first player in. However, if you came in after someone else, the zone would level to them, and not you. This meant that it was often punishing for low-level players who came into that zone behind someone who was much more experienced at the game.”

Thanks to One Wasteland, players of all levels can enjoy activities across all of Appalachia, whether you’re traveling solo or venturing out with friends. Events will become more approachable for everyone, as well. For example, a lower-level character will now be able to take a more active role at events like Encryptid, A Colossal Problem, and Scorched Earth. Those events will still be tough for them, but they can have a bigger impact than before without compromising the difficulty for others. Likewise, higher-level characters will get max-level loot from creatures like the Legendary Megasloth during Fasnacht and the Mole Miners at Uranium Fever.

“New players will now be able to explore the wasteland of West Virginia without the difficulty spikes that they would previously encounter,” explains Gardiner. “While a Deathclaw will still be a challenging fight, and they will still encounter hard boss creatures, they will no longer run into random enemies that are seemingly way too high level for the zone of the game that they’re in. For Veterans, they’ll be able to go back to several previous areas of the game and find new challenges. And, both types of player will be able to group together to build, quest and tackle events as monsters are leveled in real-time to compensate for any level differences.”

Season 2 kicks off with the arrival of Patch 22 and it’s bringing a host of updates and enhancements to the Seasons system, as well as a new S.C.O.R.E.board and new rewards! In Season 2 you’ll join the Armor Ace and the Power Patrol as they face off against the Subjugator and his army of Red Viper minions. Help lead the charge against the oppressive Vipers and fight for Liberty as you rank up over the following 10-weeks. As with Season 1, each time you rank up you’ll receive rewards like themed cosmetics, C.A.M.P. items, in-game currencies, Perk Card Packs and more.

As with The Legendary Run, there will be 100 ranks for you to achieve during our second Season. This time, we’re adding a host of brand-new cosmetics, including Armor Ace Power Armors, Red Viper Armors, weapon skins, a Greenhouse Building set for those of you with a penchant for plants, and even some leisurely activities for your C.A.M.P. visitors to enjoy, like the Foosball Table and the Armor Ace Shooting Gallery. In-game currencies, like Atoms, Scrip, Gold Bullion, and Caps are all returning as rank-up rewards as well. Perk Card Packs will also come in handy for those of you who plan to equip and upgrade Legendary Perks after Update 22 arrives. We’re even experimenting with some new rank-up rewards, like Vintage Nukashine and Nuclear Keycards.

“There were lots of lessons to learn during Season 1, and we were thrilled with the level of player engagement and feedback that we got in the inaugural season,” says Senior Economist James Phillips. “One of the key areas we tried to improve throughout Season 1 and now into Season 2 is the amount of S.C.O.R.E. available to be earned through the Daily and Weekly Challenges. We added a variety of double S.C.O.R.E. Events and extra challenges, and we permanently increased the amount of daily challenges to give players more options to progress to Rank 100.  That being said, we heard continued feedback on players wanting more of the S.C.O.R.E. to be moved into Weekly Challenges instead of Dailies, so in Season 2 we are increasing the number of Weeklies in response and moving some of the S.C.O.R.E. earned from Daily Challenges to Weekly Challenges.”

But that’s not the only change coming in Season 2. Starting now, rank-ups will be purchasable immediately, so those who would like to rank up using Atoms can do so the same day that the Season begins. Additionally, we’re adding a number of last Season’s rewards, like Lunchboxes, the Ammo Converter, and the Chicken Coop, among others, to Gold Bullion vendors, giving those who might have missed them a chance to snag them.

“We have been listening to all the player feedback, especially when it comes to the grind of Challenges and how players are progressing through the Ranks of the Season, the variety of rewards that they can unlock, and having more goals and rewards to gain even after finishing Rank 100,” says Phillips. “The best is still yet to come from 76 Seasons. The feedback we have gotten from players has been so valuable, and we can’t wait to hear what players have to say about the upcoming Season!”

Getting into Daily Ops

Get even more out of your dungeon runs with Daily Ops, a new system that adds replayability to dungeons. “Appalachia has a wide variety of interesting dungeon locations, many of which have little reason for return visits after initial exploration,” explains Lead Level Designer Steve Massey. “Daily Ops is a repeatable gameplay system that allows players to hop into one of these dungeons and fight challenging waves of randomized enemies while completing a series of objectives. This combat feels unlike anything else in the game – not just because of the intensity, but also the Enemy Mutation system, which makes for more challenging encounters that will push player builds and abilities to the limit. It’s a perfect compliment to our One Wasteland feature because you can fight in any dungeon in the world and have an exciting and balanced experience.”

Each week, a dungeon will be promoted to the ‘Daily Op’ and each day a new Enemy Mutation will be applied to that dungeon. Enemy Mutations are another new system that provides an enemy parallel for player mutations. For example, an Enemy Mutation might make an enemy explode on death or be cloaked when it’s not attacking you.  When coupled with the changing objectives, this will create a fresh and exciting experience for players to return to. The difficulty of each Daily Op will scale to your party – from one to four players – and should take between 10 and 20 minutes to complete. The goal of Daily Ops is to provide an even more rewarding experience for the players who keep coming back to Fallout 76. 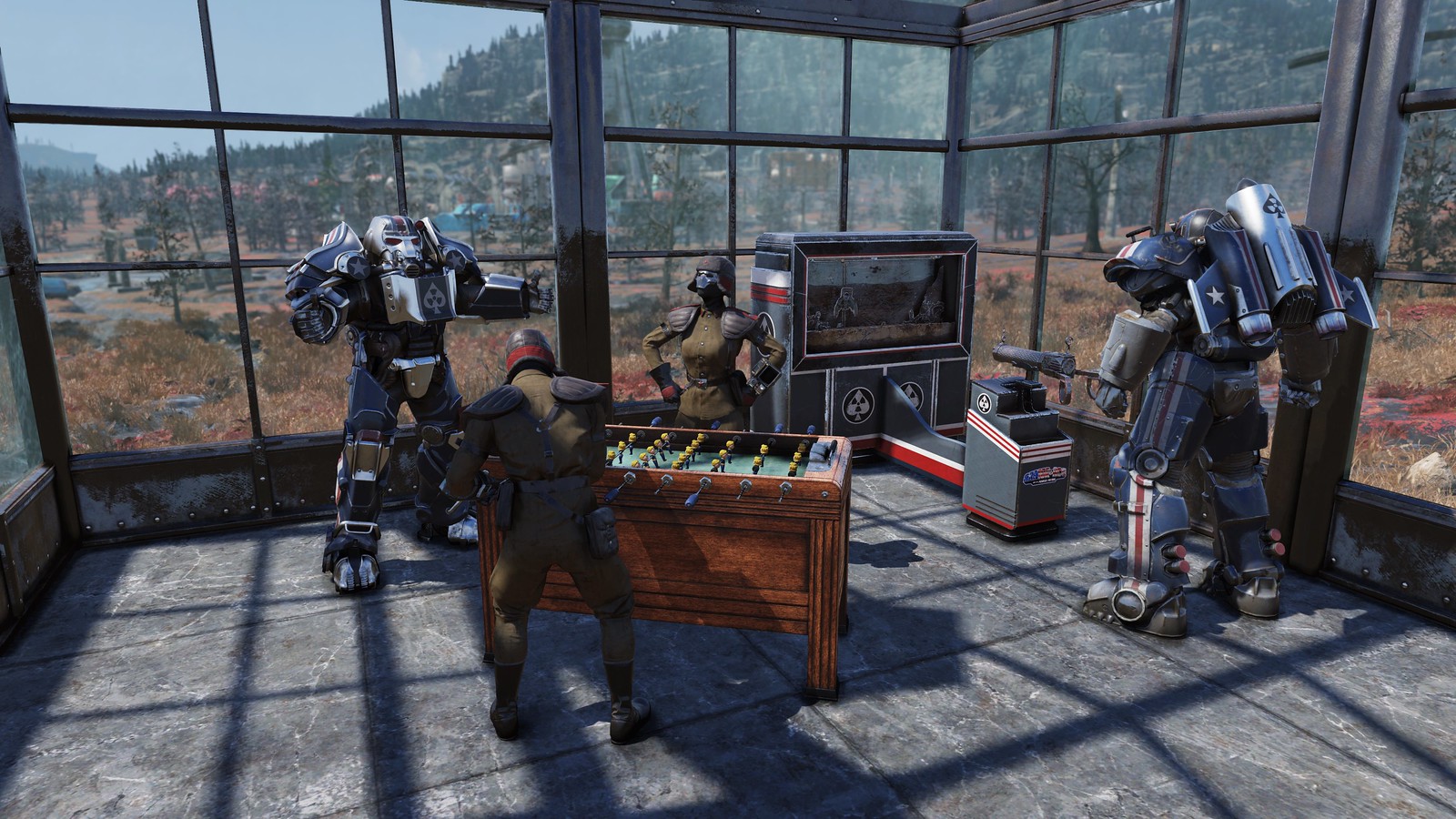 The tiered reward system is designed to heap bonuses on players who take advantage of everything the Daily Ops have to offer. Players may only receive the full rewards for completing Daily Ops once per day, but as Massey explains it, the rewards can be awesome: “With just one top ‘Elder Tier’ run, you can get the following: a large XP grant, two currency grants, two legendary items, and a ‘care package’ consisting of ammo, first aid, and explosives. Additionally, you have up to three rolls from the Rare Item list, featuring a great list of unique items. A few examples are a new, customizable melee weapon called the War Glaive, as well as a C.A.M.P. item that can cure diseases! We’re also planning to add to this Rare Item reward list early and often to keep the rewards for Daily Ops fresh and exciting.”

And just like with the rest of Fallout 76, the team will be listening to player feedback as they consider their plans for the future of Daily Ops. “We’re currently putting together a plan for a second Daily Ops beat and are excited to get widespread community feedback to help drive the direction,” says Massey. “We’re looking into a second Game Mode as well as additional Locations, Enemy Factions and Enemy Mutations. An enterprising user on our Public Test Server forum posted that we’re launching with 48 possible randomized daily combinations – this is admirable for initial launch but we’re excited to expand this exponentially with future releases.”