It’s that time again! Every couple years, the development team behind Final Fantasy XIV unleashes a new, JRPG-length expansion to their hugely successful MMORPG. This year’s new release, Shadowbringers, launches July 2, with early access beginning June 28 for players who pre-order. In it, the Warrior of Light (that’s you) will travel to “The First,” a world that has been all but consumed by light and is on the brink of catastrophe. To restore balance and save the realm, players must cast aside the light and become what they must: Warriors of Darkness. (Heck yeah.)

A recent event hosted by Square Enix and held in San Francisco gave media a chance to go hands-on with some of Shadowbringers’ new content, including a new dungeon, two new jobs (Dancer, a ranged DPS job focused on buffs / support; and Gunbreaker, a new tank job who wields a Gunblade as their main weapon), two new playable races, and more. Attendees also got some facetime with Naoki Yoshida, the director and producer of Final Fantasy XIV and the man most famously associated with turning the game around after its rocky 1.0 launch.

Read on for a series of highlights from my interview with Yoshida-san (shared with a couple fellow FFXIV devotees from Gamer Escape and Easy Allies), and a selection of images and clips captured during my time with a pre-release build of the game running on a PC in a pre-release state.

On guiding principle Yoshida-san wanted the dev team to keep in mind while creating content for Shadowbringers:

“In terms of direction that I gave to all the teams, including the battle team, people that work on cutscenes, people who work on the lighting… we have these characters we’ve been with since A Realm Reborn — the Scions of the Seventh Dawn. We’re going to be delving deeply into their backgrounds and motivations, so we wanted to make sure they’re depicted in an appealing way, that there’s some charm to wanting to find out what these Scions are and what they’re thinking, so we wanted to make sure their emotions are tied into the gameplay experience.” 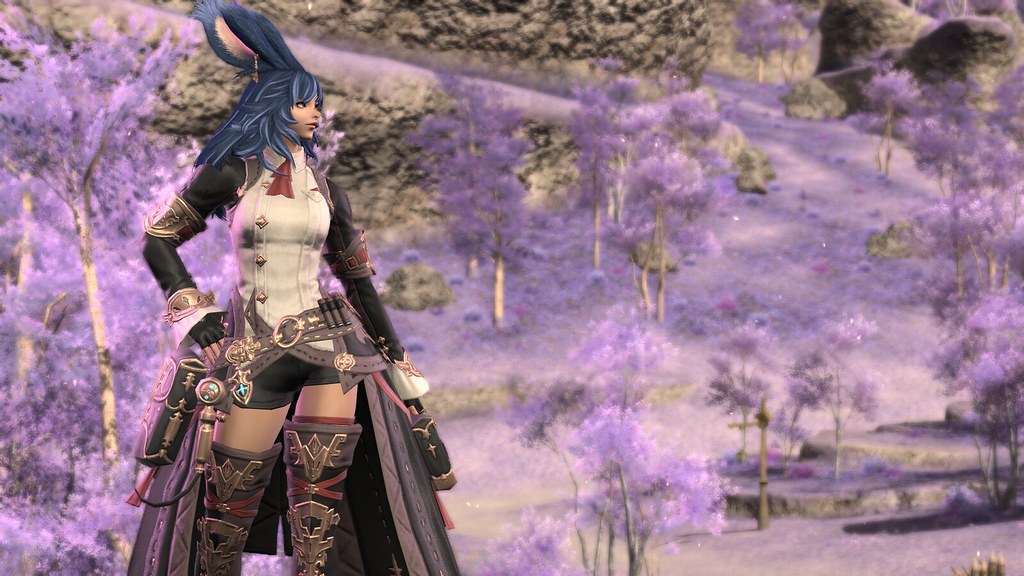 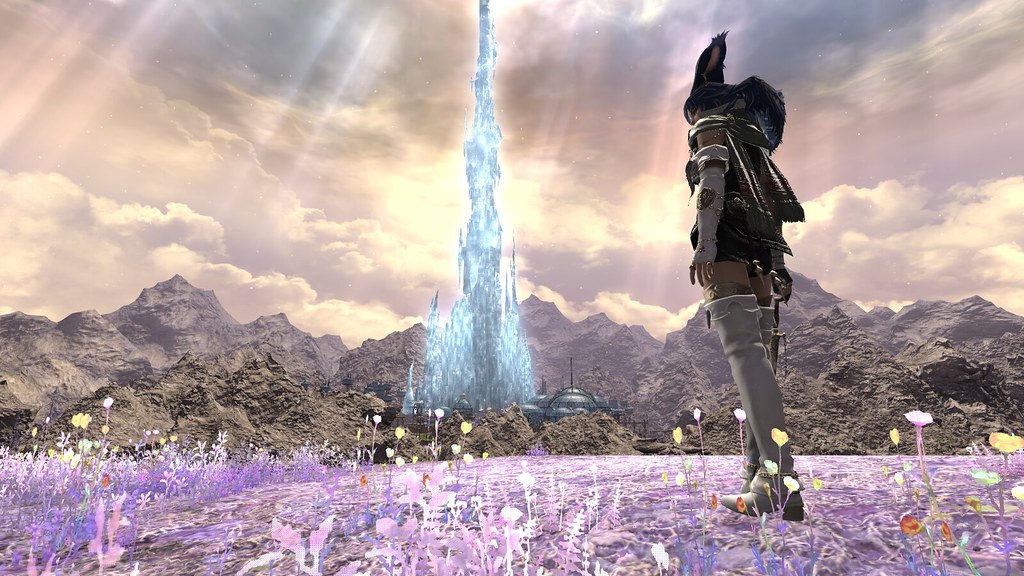 A few /gpose photos of the Viera I created. Ain’t she cute?

On simplifying the Tank role in Shadowbringers:

“Players who use Tank jobs have provided a lot of feedback about how they want them to play, so a great deal of focus was placed on how do we respond to that and how much of that can we address?

“I think a lot of people who play the Tank role have a fundamental desire to deal a lot of damage and unleash the maximum amount of DPS they can, and they don’t like that when they switch into a tank stance their DPS is lower because they’re in a defensive stance. I don’t think players dislike the fact that by turning on the Tank stance they’re generating more enmity; it’s more that by turning on a Tank stance you’re lowering your DPS. So people hesitate to try and actively generate enmity because they’re worried about their DPS dropping. So one of the first ideas was to remove that penalty, so to speak, of lower DPS when switching to a Tank stance.

“The initial thinking of having both offensive and defensive stances was strategic: we wanted players to go into different encounters and determine when is a good time to switch to an offensive stance or activate your Tank stance and generate enmity, but looking at how players dislike the Tank stance, it might as well have one single stance. By reducing it down to one stance and toggling on and off, we’re hoping that will address that player feedback. With the update, it will be a matter of simply switching the Tank stance on or off; you no longer need to worry about turning on your tank stance to generate more enmity, you just have to worry about generating DPS and utilizing your skill rotations. If there are certain types of content with specific mechanics you’ll have to deal with those.

“With the system becoming so simple, I think that allows it to become easier to grasp for newer or less experienced players.” 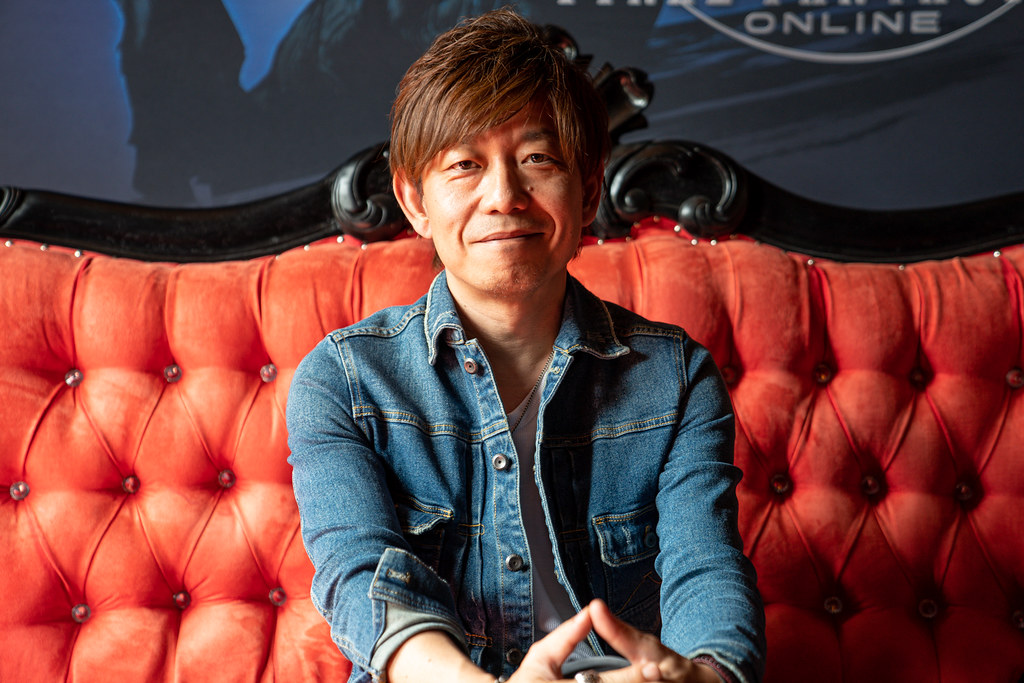 On whether we can expect any new PvP modes in Shadowbringers:

“It’s actually deliberate that we don’t have any new PvP modes at the launch of Shadowbringers. We have the data to back up this claim — when an expansion first launches almost 100% of players are concentrating on getting through the main scenario, or enjoying the battle content, leveling their jobs, leveling their Disciples of the Hand / Land, et cetera, so there’s almost nobody in the PvP content (or the Gold Saucer content, for that matter). We do have plans to update it, it just won’t come until patch 5.1.”

On the recently announced 24-player YoRHa Dark Apocalypse raid and the first meeting with Yoko Taro and Yosuke Saito:

“It’s a very simple reason that we decided to utilize the NieR series: we had so much player feedback and requests to add gear based on NieR Automata. Of course, it would have been easy to just bring in the gear designs and have them available as a reward, but I don’t think that would be as interesting as having Yoko Taro actually participating and coming up with content for us to play. Then, by clearing that content, players can obtain the gear as a reward. That’s the reason we had initially thought about bringing them on.

“In terms of that first meeting, it was Yoko Taro, Yosuke Saito, XIV’s assistant producer, and the project manager, so it was five people. We went to dinner together. Saito-san is an avid MMO player — he loves World of Warcraft as well — so I was sure this would be an appealing idea for him, but Yoko-san… we approached Yoko-san and asked if he’d be interested in doing something like this. Yoko-san laughed hysterically: “Are you for real?! Are you trying to end Final Fantasy? But it sounds very interesting, so I’d love to do it.” The decision was made very quickly, but they were very humble about it: “Are you sure you’re okay with it being a collaboration with NieR?” They were very happy to be on board.” 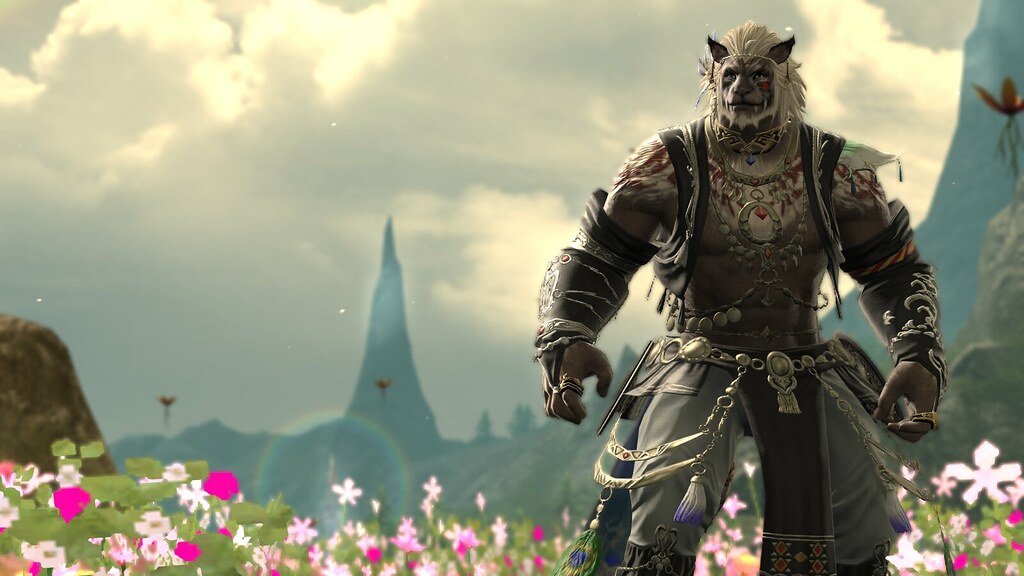 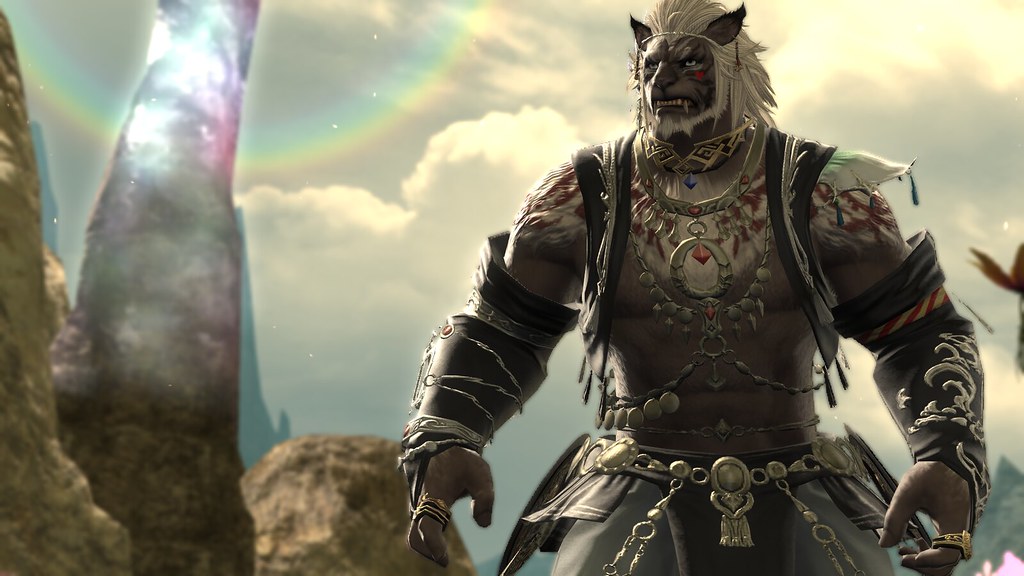 A couple /gpose photos of the Hrothgar I created. Ain’t he cute?

On the huge new changes coming to the Machinist job:

“When redesigning the fundamentals of the Machinist job, one of the major things we looked at was the Heat gauge. It’s hard to tell whether it’s a good thing to increase that gauge, how much is too much, whether or not it’s good to overheat… it was a difficult mechanic to understand, especially when trying to deal optimal DPS.

“In terms of the Job gauges — not just for Machinist, but for all jobs — the dev team wanted to change the thinking of how these gauges function. We want to make it a good thing to fill up your gauge. We wanted to remove the idea of having to maintain a certain level or decrease your gauge at certain points, because that’s not very easy to grasp. This problem was especially prevalent with Machinist and the Heat gauge.

“We also received feedback that Machinist was simply not fun or interesting to play. Throughout 3.0 and 4.0, the development team was torn on how to position Machinist. We thought it was about utilizing [Machinist’s primary weapon] the gun and they had strong positioning as a gunner, so we made sure they had actions that stylishly utilize their guns to execute their different attacks.

“But we’ve drastically redesigned it for Shadowbringers. We wanted to skew back towards the name “Machinist,” and bring out that element of using different machines and weapons — like a mecha, which you might have seen in our Job Actions video — and have that visual representation of how the Machinist can use different machines and weapons in their arsenal. The gun is now just one of the many weapons that the Machinist can handle. It might feel like a completely new job at this point! We’re hoping with these revisions you’ll enjoy it more, and the job will be more fun to play.” 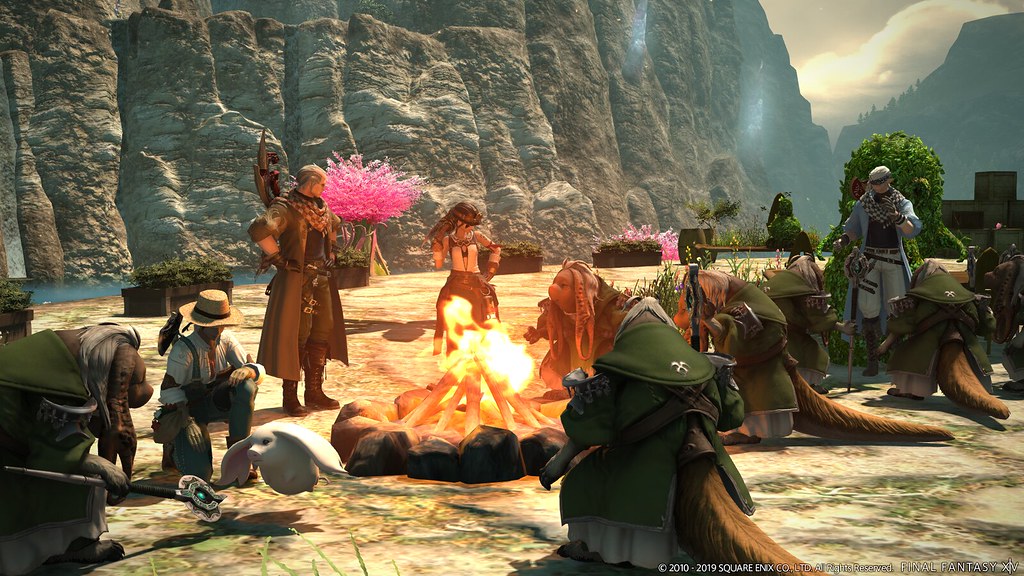 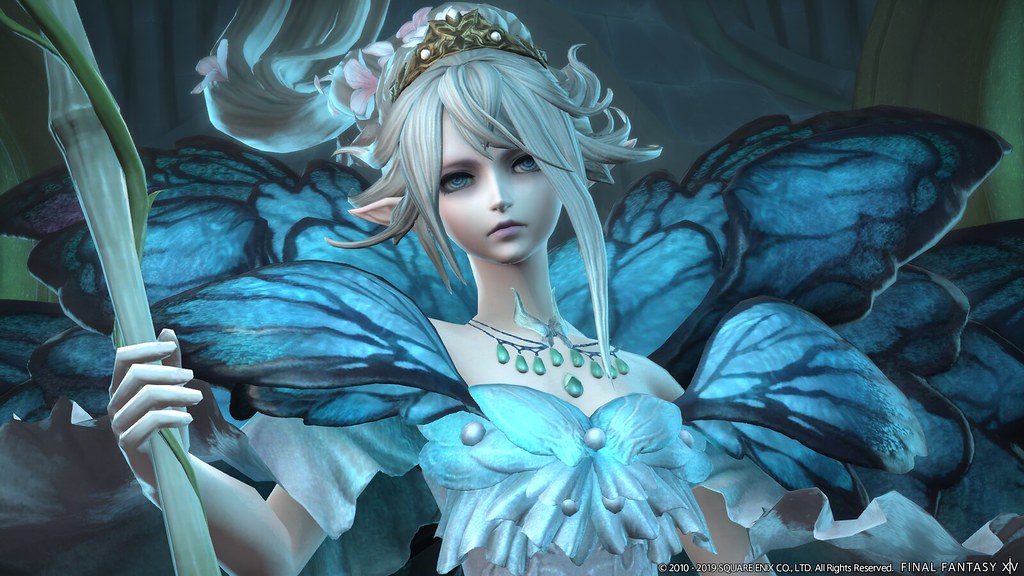 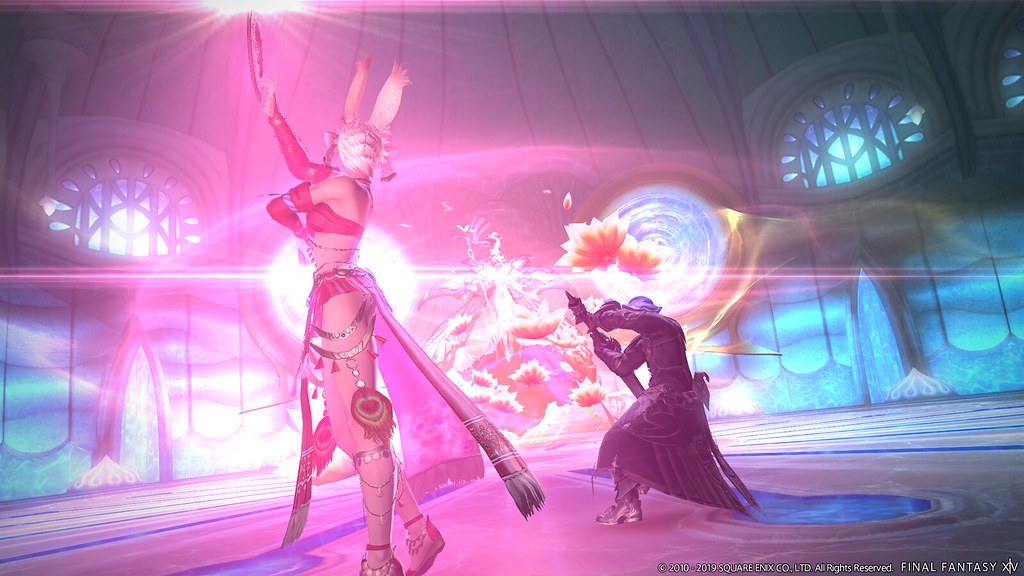 On whether the dev team has considered making changes to FFXIV’s endgame progression cycle:

“If we feel there is a need to deviate or make changes, we would consider it. Right now, we feel like we have a good set of content for after you reach the level cap. But that being said, we have made adjustments and revisions to items that drop in that content. In terms of Savage drops, they aren’t going to be a direct form of a drop, per se — of course, Turn 4 of Savage content (where you get the weapons) might not apply to this — but whenever you open that coffer and obtain the item it should correspond to whichever job you are when you open it, so you won’t have to worry about item drops that are for someone else’s job.

“The overall endgame cycle will not undergo any significant changes, but we have identified stress points for players and tried to apply tweaks so we’re alleviating those frustration points. We’re hoping players will notice that while playing.”

Plus… you can do this. What’s not to love?

“In terms of how Soken-san approaches the composition of his music, he’s been taking one stance and hasn’t changed that concept. He’s instead been trying to raise the quality with each song he creates. His work thus far in FFXIV culminates in [Stormblood final boss] Shinryu’s theme. That single stance he’s been pursuing this whole time is that in a video game, the gameplay experience is of utmost importance — it’s the highest priority that we place. So going into the player experience is the graphical element, the battle content, the music that accompanies it… no single element is the main focus. We want these to be tools where they all come together to bring excitement to the players.

“Of course, Soken-san is continually pursuing that concept. There is one moment in Shadowbringers — it’s not battle content, but the theme that plays at this particular timing is so memorable that I’ve replayed that scene over and over just to experience it again and again. It’s such a wonderful moment in Shadowbringers where that song plays, it just grabs the heart. Soken has put a lot of effort into his creation of sound, so we hope you get to experience that scene and enjoy it as well.”

All content discussed and assets shown in this article are based on a pre-release build that has not undergone final adjustments. All content is subject to significant change.