It’s only been a few weeks since we launched Operation: Nightfall, which kicked off a bunch of new content and improvements planned for the game. There’s a lot we introduced with Nightfall — the Op-Pass, Hack Keys, Missions, Tasks, Rewards — all while completely revamping the user interface. Given the scope of the changes, it was difficult to anticipate all of the growing pains, but we’re happy to report that as of Patch 1.26, squad and matchmaking issues should now be addressed. It has been a process, this buildout of a reliable and robust platform — one that will set us up for future growth, improvements, and content rollouts. We hope where we take the game from here exceeds your expectations and rewards your continued commitment. As always, there’s more info in the last post we did on Nightfall here on the PS blog, and also over on our FCE blog. If you have more questions, feel free to comment here and we’ll read them!

There’s never been a better time to try Firewall Zero Hour, which is why it’s also the perfect time for another Free Weekend Trial*, coming June 28-30 for active PS Plus members. Have a friend with PS VR who’s never tried the game? Well, now they can hop on with you, and you can show them the ropes! For all the veterans, we’re also stacking a Double XP Weekend on top of the trial. That’s right: this weekend, all Firewall Zero Hour players will earn Double XP during the same weekend of the Free Trial (June 28-30). We hope to see you online!

In this post, we wanted to do a deep-dive into the making of one of our favorite maps — Hangar — which is the first of two new free maps introduced in Operation: Nightfall, and the eleventh map to release in Firewall Zero Hour! 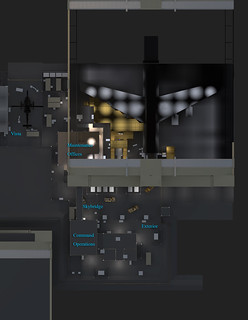 In early development of Firewall Zero Hour, we realized that one of the most important things about VR is the player’s sense of scale — putting the player in a very small or very large space, allows players to get creative with their movement. We’d only touched upon extra-large maps in the main game (maps like Docks, Warehouse, and District), so we wanted to try pushing it as far as we could in the Hangar map.

In Hangar, the action takes place around a large military transport aircraft in a hangar in the heart of Malaysia. The gigantic cargo plane — big enough to transport a tank, inside an even larger building, on an expansive airfield, and in the daytime so you can see everything — is a first for our studio. We even gave the players a few raised vantage points, like the skybridge area, so they can really take in the scope of the map. 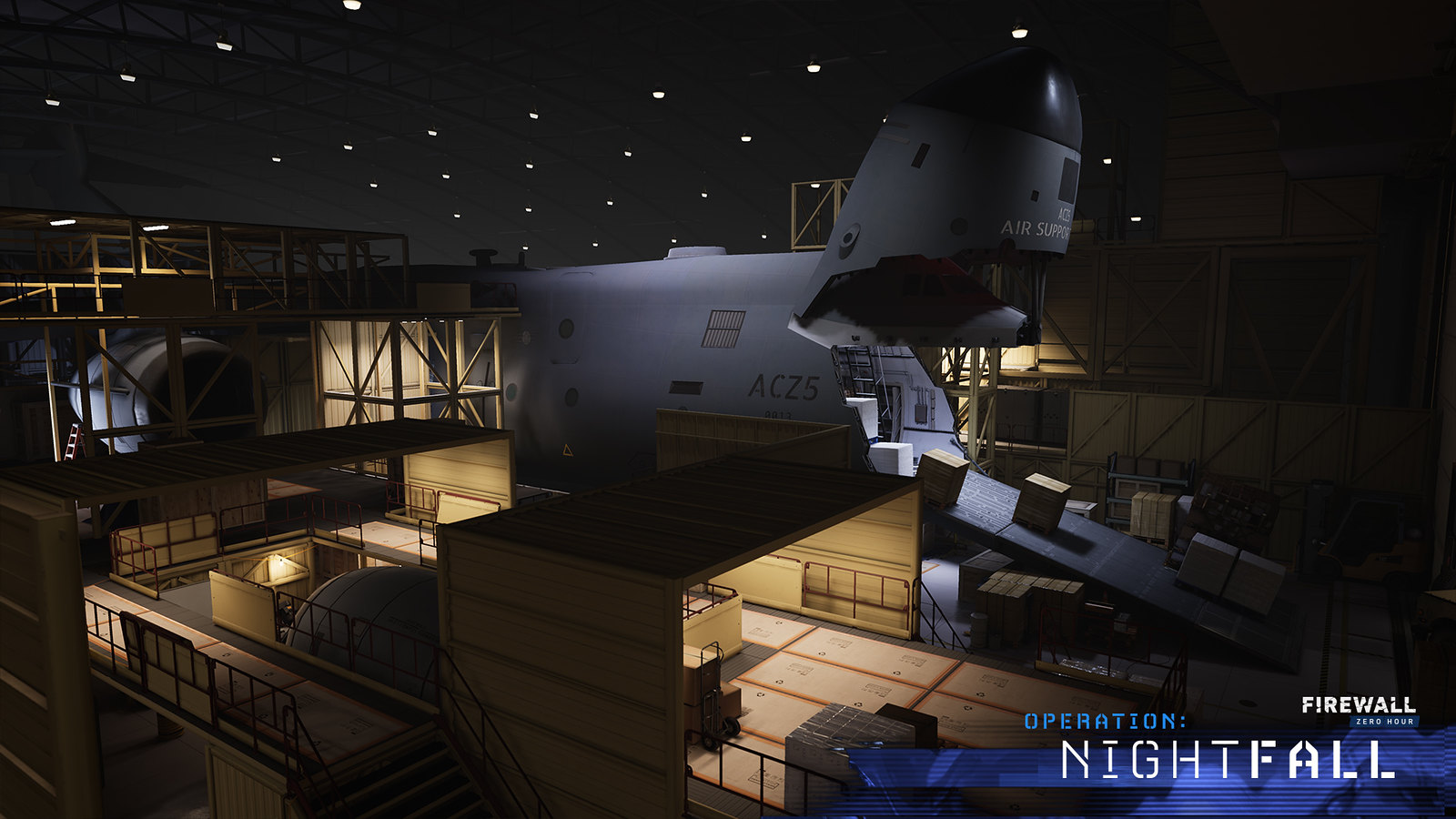 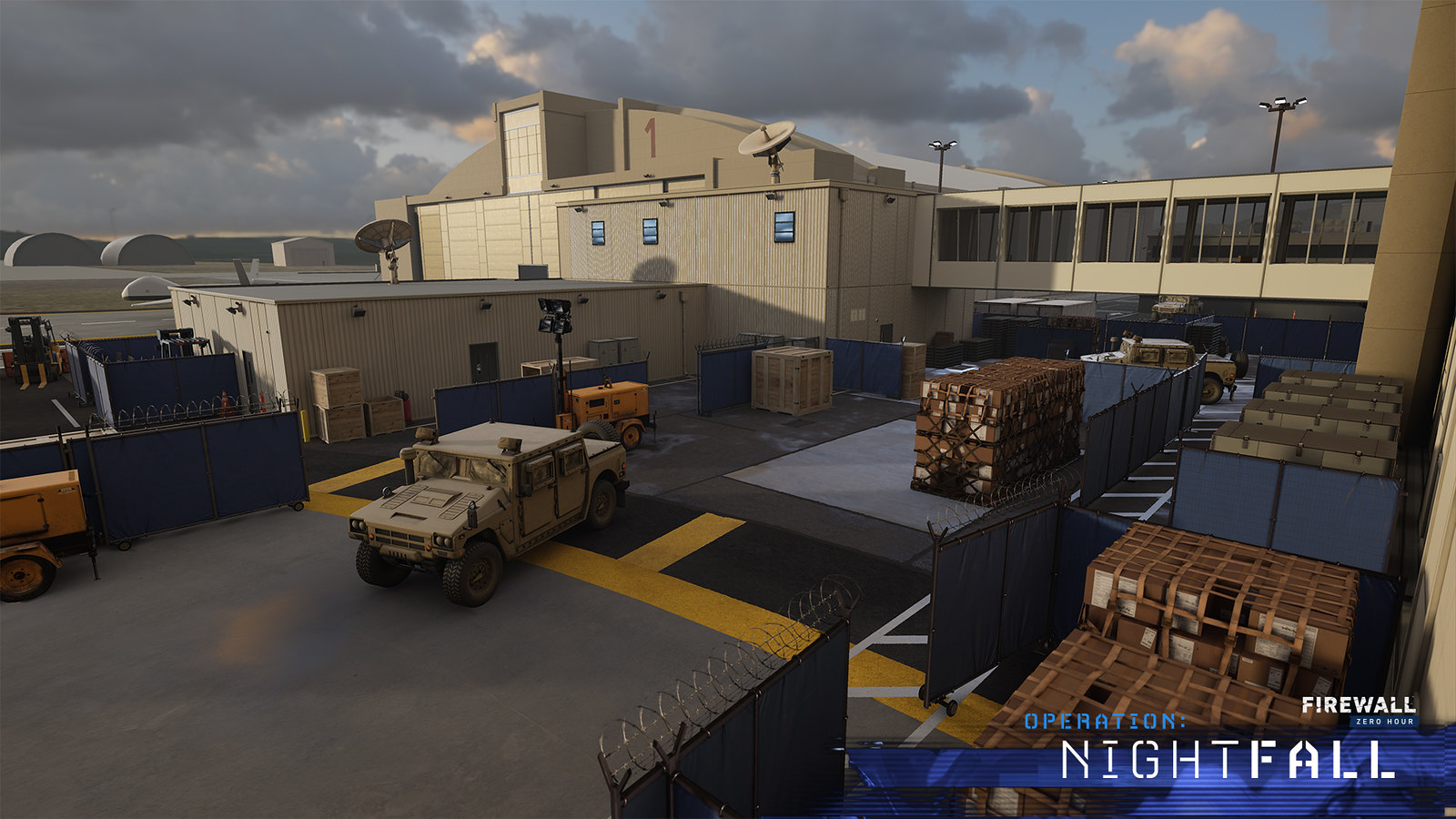 We wanted this map to combine elements that have worked well in other maps: big, open spaces, large indoor spaces with lots of cover and different height levels, and tighter rooms and corridors that lend themselves well to intense, up-close firefights. Across the Hangar map, there are lots of nooks and crannies for enemies to hide in. We wanted every part of the map to have ample cover options. We’ve seen so much creativity from the Firewall Zero Hour community in terms of creating new and different strategies on the existing maps, and a lot of them are based on using the environment to your advantage. 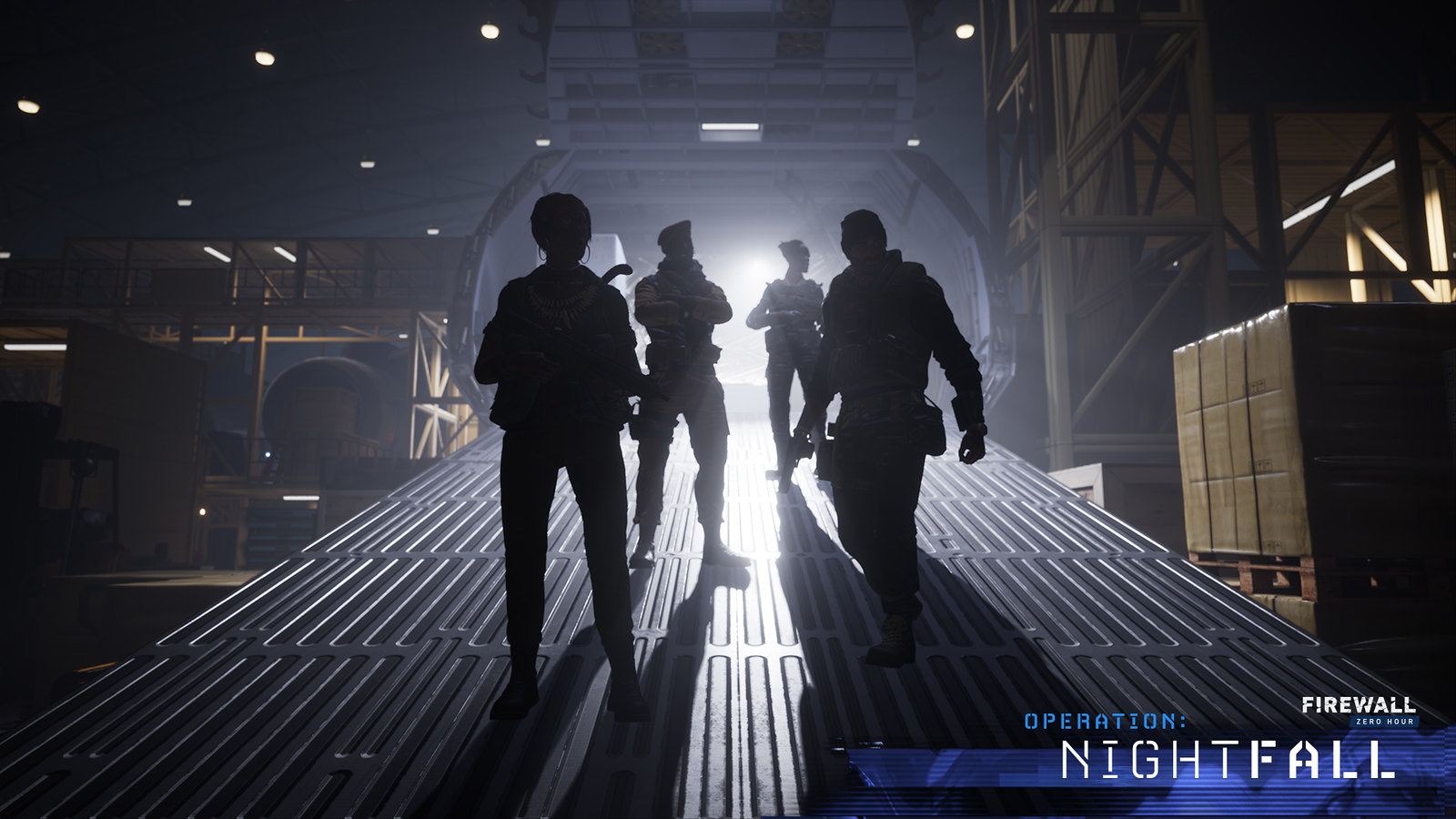 Be cautious when searching for the Laptop, though; all those nooks and crannies can mean a more challenging search, and more risk of running into enemies lying in wait before you get there. Don’t forget to look up! You’ll have to watch out for enemies perched on balconies, walkways, and the skybridge. We think having to be mindful of above and below adds a wealth of unpredictability and fun to every match, and it’s something we did our best to amp up in Hangar. 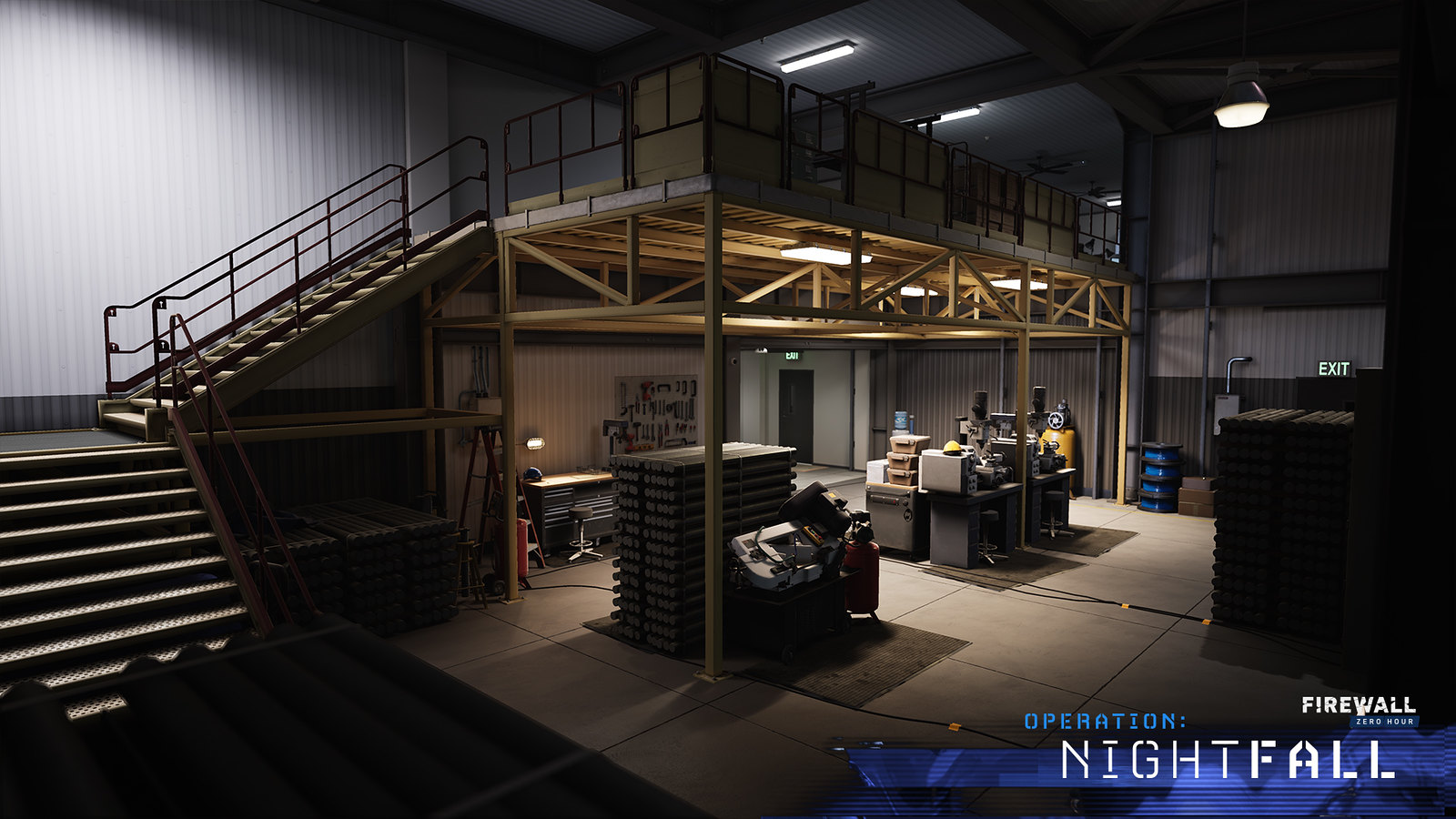 One of our favorite parts of the Hangar map is the Air Traffic Control Room. Sure, we’ve got a gigantic airplane in an even bigger building, on a gigantic airstrip–but we just love all the movement and details on the monitors. A lot of research went into making this space as believable as possible. We will always keep trying to come up with new ways to bring our maps to life. 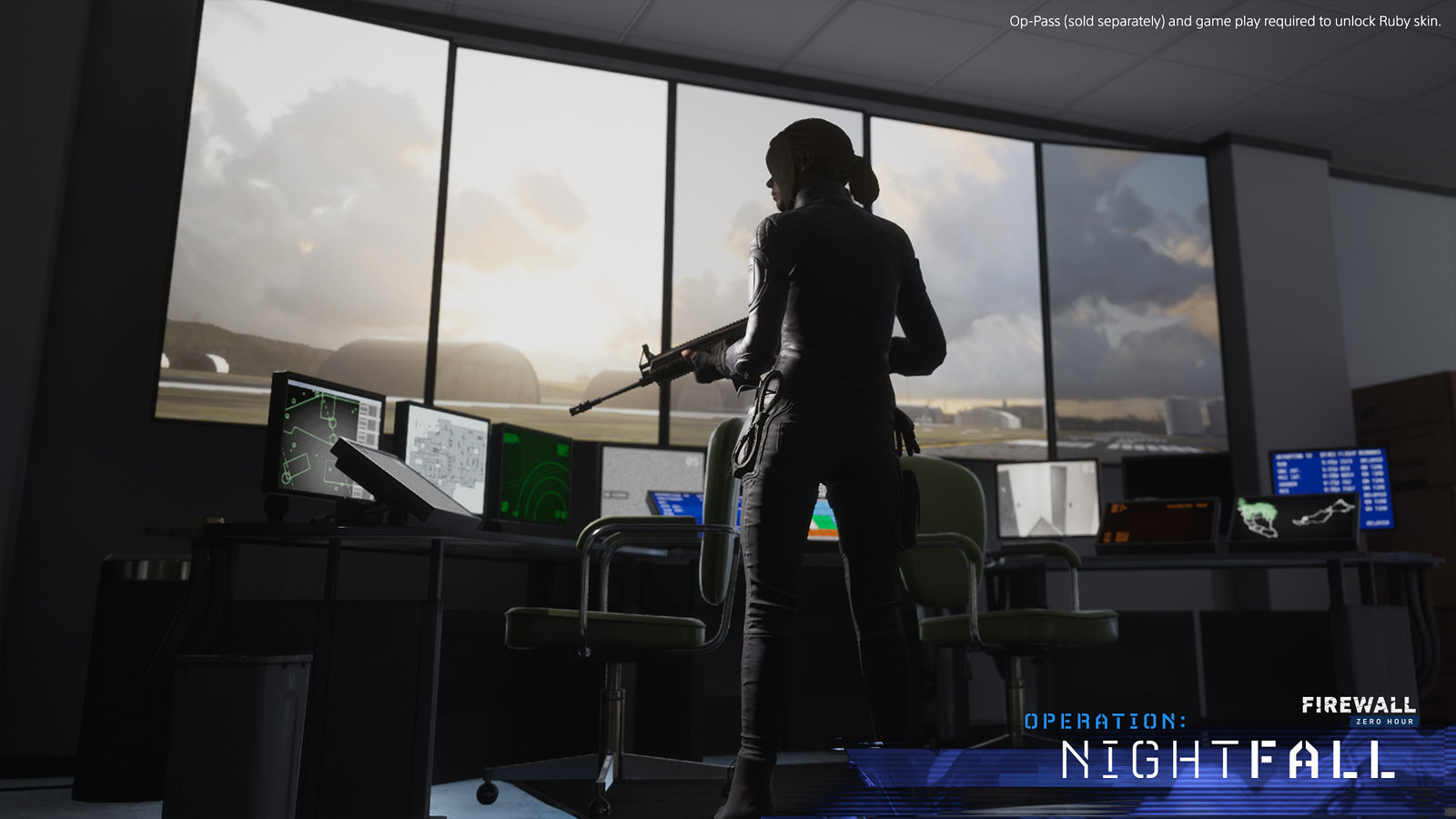 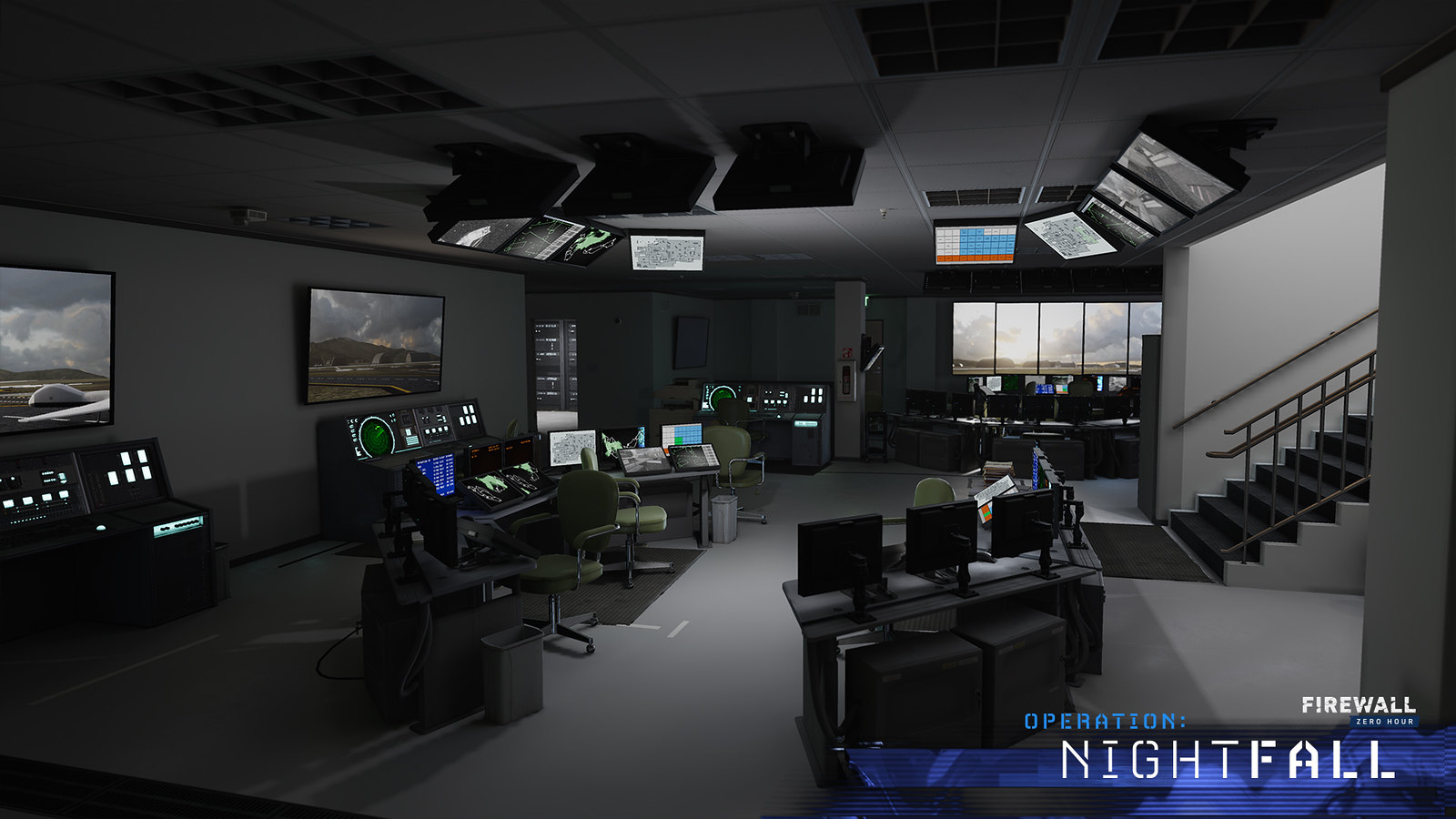 Deep Dive — Anatomy of a Map, from Concept to Final: Hangar Blockouts

Blockouts are the first phase of the map creation process. In this first image below, we have the blockout version of the exterior of the Hangar map. During this phase, a barebones but fully playable version of the map is made. It’s rudimentary look allows for quick iteration, empowering the team to “find the fun” before committing to the final look and layout of the level. Props and entire buildings are represented in their simplest forms during this phase, often times just simple blocks–hence the term “blockout.” 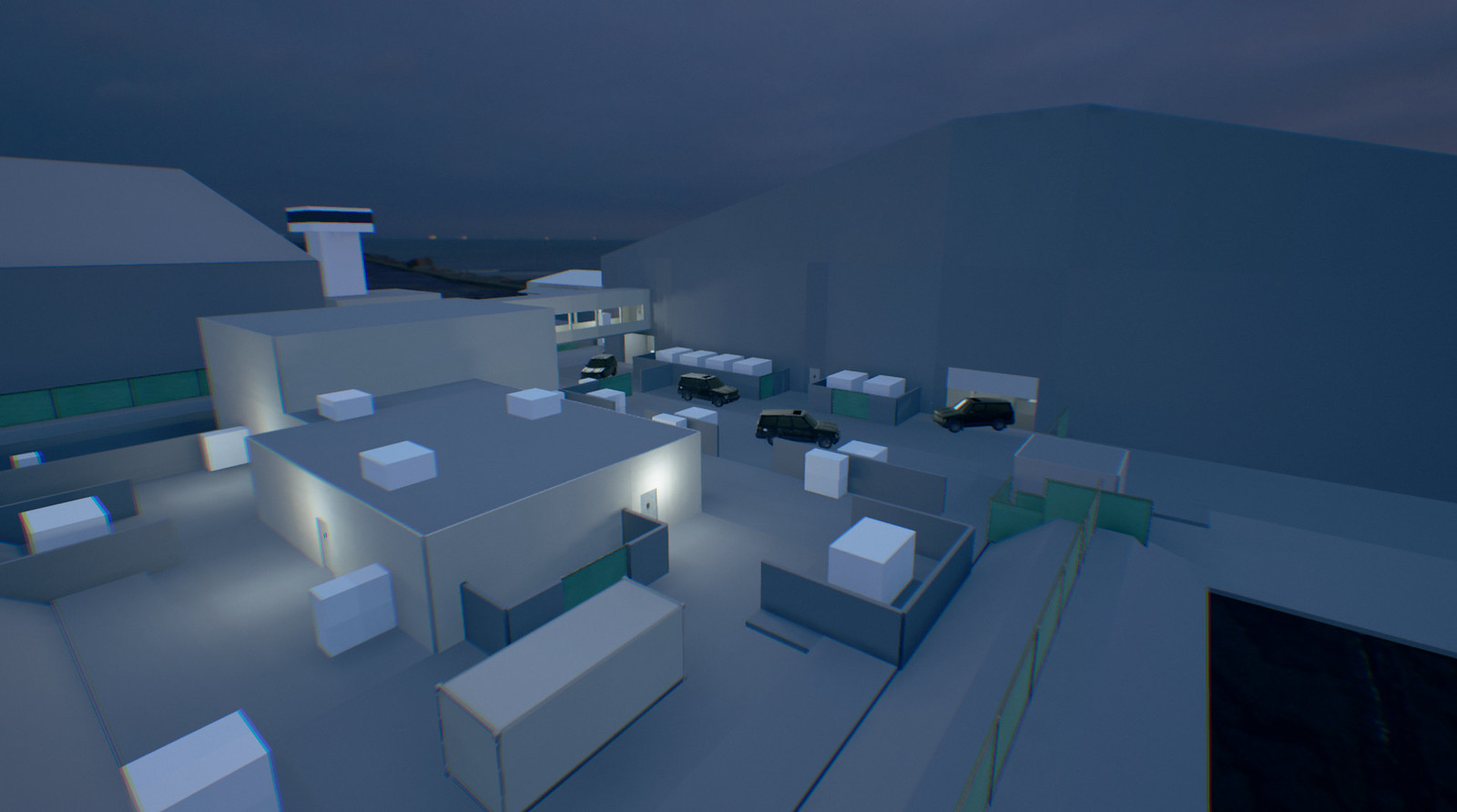 After the layout of the map is finalized, the first Art phase begins, below. During this phase, the artists begin creating the 3D geometry for the buildings and grounds, and also their corresponding “materials,” such as concrete, corrugated metals, etc. Interestingly, during this phase, many near final assets will coexist with lingering blockout assets from the previous phase until the art team systematically replaces every asset. 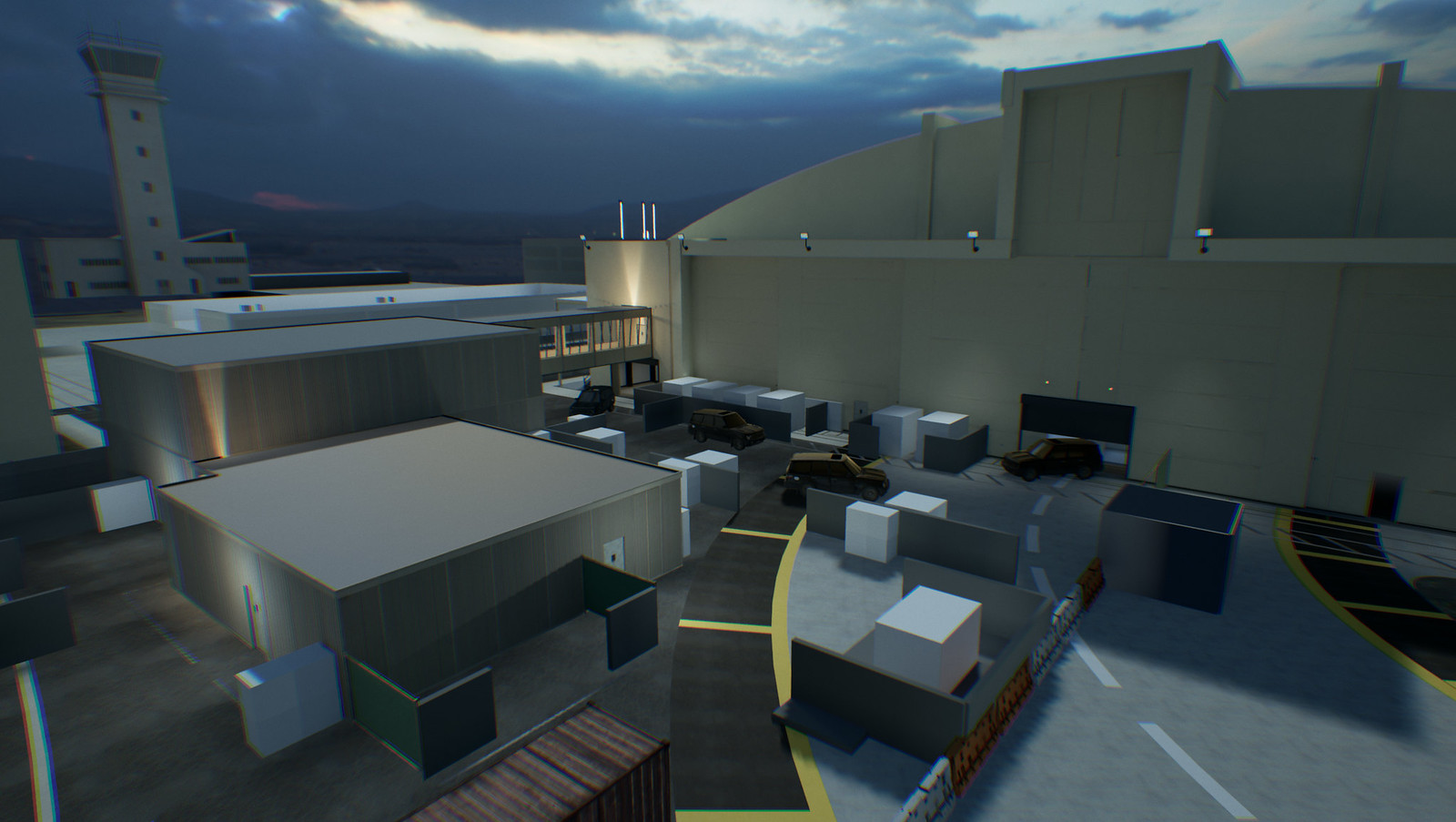 Below is the final version of the scene. Big difference! All blockout assets have been replaced with final assets, and additional assets have been added as well to make the scene feel more believable and lived-in. The periphery, sky, and lighting have all been updated to achieve the desired time of day, which changed to something more dramatic compared to the original blockout version. Unique sounds and music have also been added at this stage, tying the whole package together. 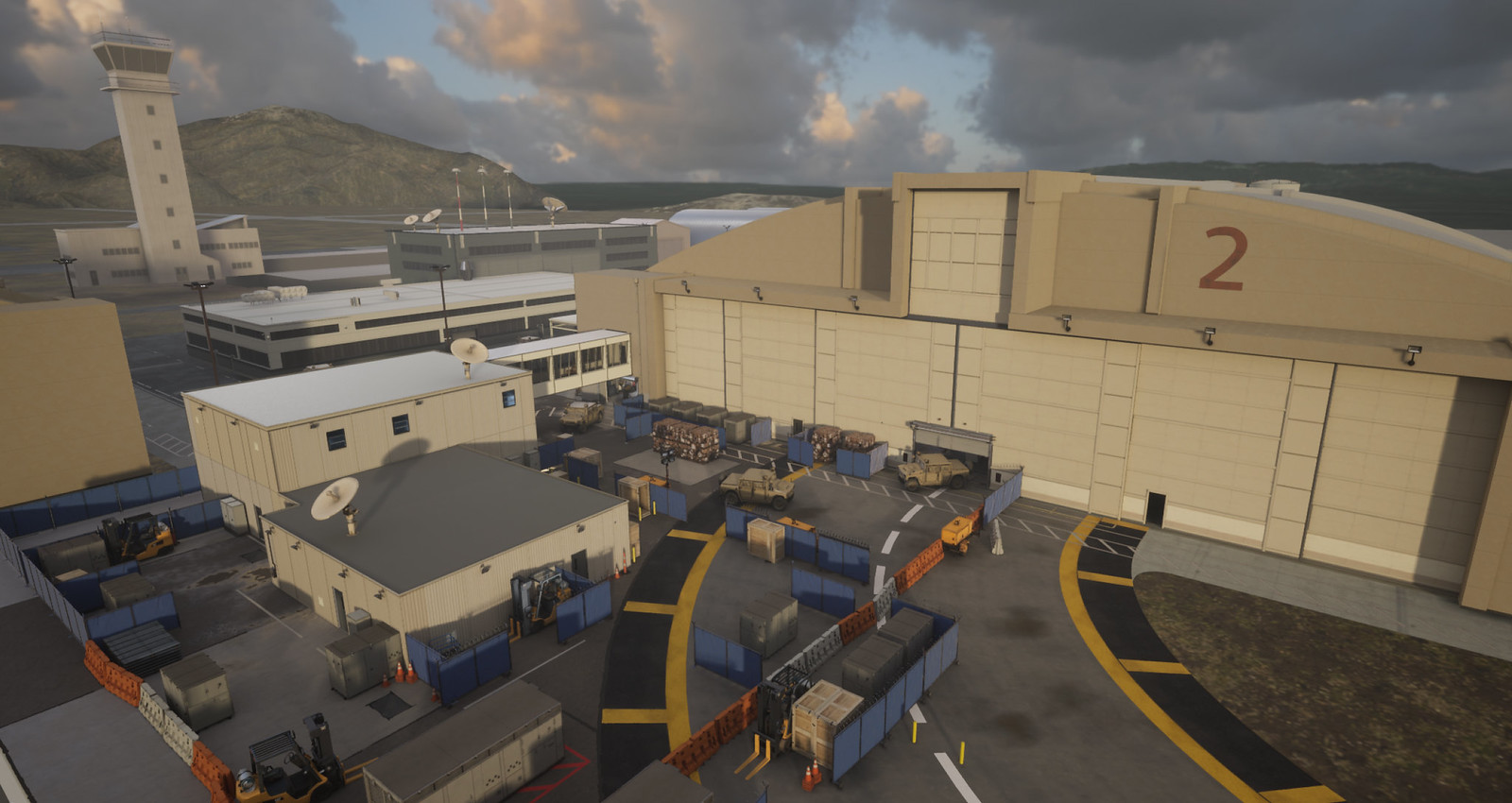 This is the blockout of the Hangar interior, below. Notice how the airplane — one of the most complex assets we’ve ever made — is still represented as a simple shape — in this case, a tube.

As with the exterior — once the layout of the map is finalized, the first Art phase for the interior also begins, seen below. During this phase, the artists begin creating the 3D geometry for the structural elements. “WIP” (work in progress) versions of complex assets such as the scaffolding and airplane are also added, to be finished in a later phase. A very rough lighting pass is also added to help get across the feel of a large Hangar, even at this early stage. Scale is extremely important in VR, and the ceiling lights really help achieve the feel of such immense structures. 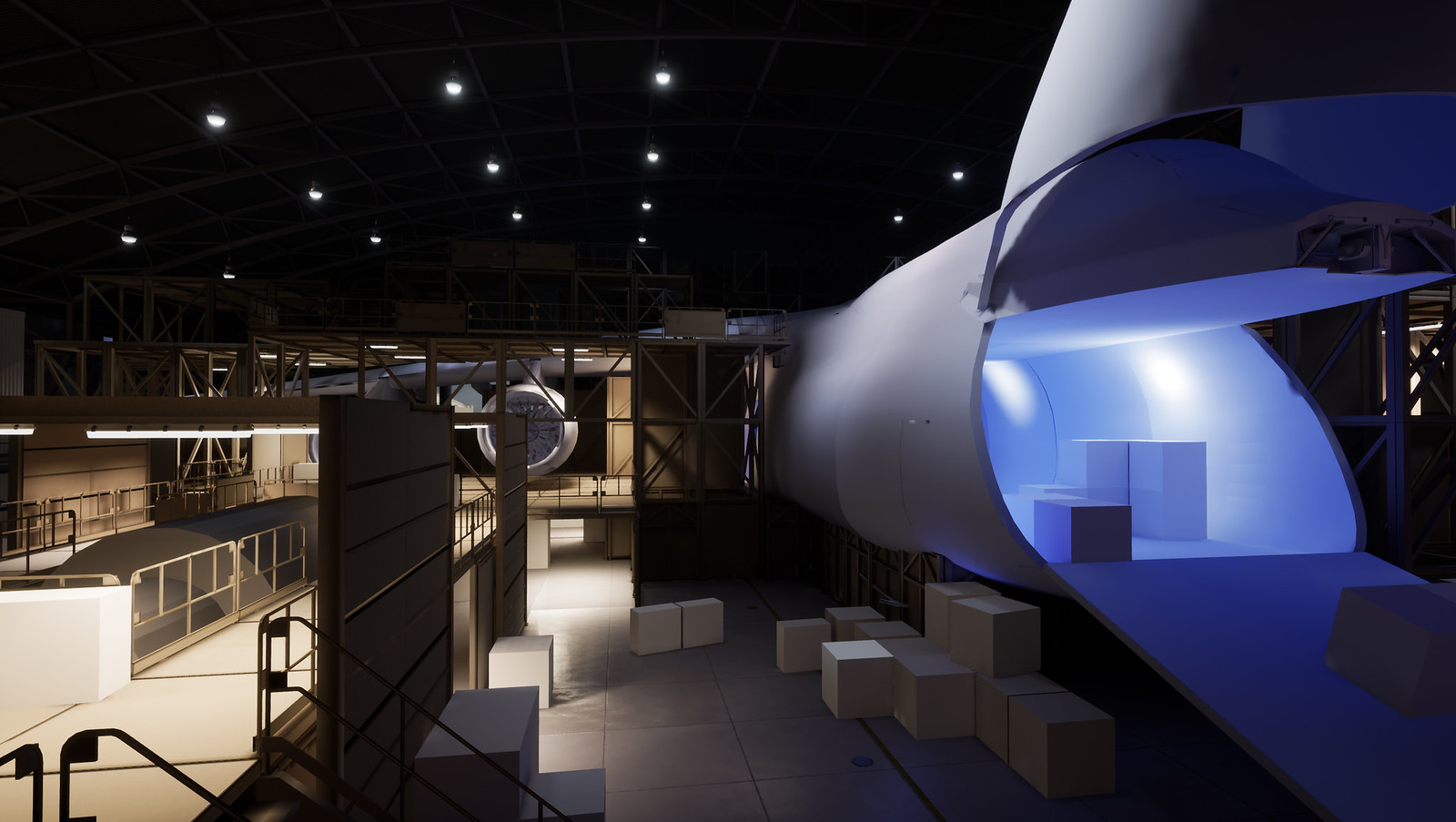 Below is the final version of the scene. All blockout assets have been replaced with final assets, WIP assets have been updated with final assets, and additional assets have been added as well to make the scene feel more believable and lived in. The lighting pass is much more dramatic, creating bold pockets of light and shadow in the player’s space, while also allowing the player to appreciate the giant structure of the building. A lot of sound design went into this room as well—gunshots and footsteps in large rooms made of hollow metal and concrete, for example, sound very different than in outside spaces or small offices.

We are so excited to see the community’s reaction to the Hangar map, and to Operation: Nightfall in general. See you online, Contractors!

*PS Plus required for Weekend Trial

The Persistence for PS VR Gets Huge Free Update October 18