Every time our development team updates Warframe — that’s 28 major updates since 2013 — it’s learned to evolve, change, or expand on the original premise of stepping into the skin of an all-powerful space ninja. Revealed during a live demo in today’s TennoCon 2020 Convention, Heart of Deimos unveils the newly playable moon of Deimos, overrun and corrupted by the disease-like “Infested” faction.

Beautiful but grotesque, crawling with a hostile living landscape, featuring a backstory that’s also a new chapter, for us Heart of Deimos is ground breaking. For the first time in Warframe history, this update will simultaneously ship on all platforms later this month. Day one. When it launches, Heart of Deimos will introduce our third complete open world. Coupled with our new cinematic introduction, which places players into a larger, more meaningful context than before, and our 44th Warframe, Xaku, this update will bring Warframe into a new era of accessibility, depth and level of content than ever before.

An early concept illustration of the Infested home planet

Heart of Deimos dives into the central hive of the Infested faction, a biomechanical pathogen created by the ancient Orokin civilization to fight the Sentients. Deimos is slithery and sticky, alien and alarming, gorgeous, ghastly… even gross. When you first start playing, it feels like the whole moon is moving under your feet, alive and changing. Because it is.

What made the dev team interested in tackling a third open world?

Dave Kudirka, Producer: The Infested as an aesthetic is already strange and uncomfortable with its assimilated forms and unusual biology, and so the opportunity to develop a planetary region where this is most concentrated, and with its own natural inhabitants… well, that’s exciting for game developers. We are very proud of our previous landmark updates that introduced those open world areas on Earth and Venus (The Plains of Eidolon and Fortuna), and the civilian centres connected to those environments. We think it serves our game well to provide a compelling and unrestricted space to explore, and have your actions in that space framed by a rich cast of NPCs who have relationships with us (and each other), bringing meaning and revelation as we go.

There is some existing tech and design infrastructure we could lean on to speed up development for this new alien landscape, but we were still presented with familiar challenges of new content production, design balance and testing, and a large amount of writing and VO (voice-over) required for world building. Maybe this time we bypassed some of the hard lessons we learned the first couple times, but our instinct and ambition are always to create something new and unseen that can surprise the player, so new risks are typically part of the formula.

Why the Infested? What was the attraction to explore and delve into this faction of the Origin System?

Dave Kudirka: The Infested have been a long-standing part of the Warframe universe along with the Grineer and Corpus factions. As players journeyed their way through our quests and narrative threads, we learned more about the Grineer and Corpus culture, their technology, and their history. The Infested have largely been on the periphery in this sense acting more as mysterious factions with unknown origins and motivations, not usually a direct or imposing threat… but our curiosity remains.

The Heart of Deimos content is available very early on the player path, so older and newer players alike will get to experience this weird and twisted landscape, and meet its friendly (and hostile) inhabitants to gain insight on what the Infestation is.

For those seasoned Tenno who have already put in their time with Warframe, it makes important connections to the experiences and storylines players have already discovered, but also reveals items relevant to events to come.

Kary Black, Associate Art Director: The simple answer is: They are the faction that was yet to have a landscape, and that was enough to get people thinking about it. Layout Artist Ross Colgan did an opening take, which felt appropriately gooey and fun to walk through. Then Nightwave Season 2 proved you could tell a compelling story with the Infested. When a team wrapped on the Sentient component of Empyrean, we wanted to keep the momentum and solid previz and confidence that narrative would work, which made the Infested a freeing choice. We sketched out several takes; as a vast landscape inside an Infested Void Tower floating in space, on Eris, or doing it all as a “fleshscape.” Those commingled and became Deimos.

What lessons did the design team learn from creating the visual landscape of Orb Vallis incorporated into Deimos?

Kary Black: Deimos would not have come together without lessons from Orb Vallis (Fortuna), Plains of Eidolon, and the Plains of Eidolon Remaster. Each step has made for a more capable team.

Orb Vallis was so vast and hilly that it was hard to get visual landmarks to anchor you.  But on Deimos, locations such as The Dome, ‘Brain Building,’ the Worms, and Mars can all act as points on the compass.

We also wanted to leverage our procedural tileset system.  It’s consistently fun to turn a corner and not be sure what is on the other side. Orb Vallis had some great interior spaces, but their layouts stayed static, which is unlike most of Warframe. With the Infested, it felt right to do a proper procedural dungeon crawl.

We also had the lesson of scope. Orb Vallis was a large and complex project, and we wanted Deimos to be a tight, dense experience on a quick turnaround. But it was tricky, particularly with a pandemic and working from home as a new experience.

One of the key locations on Deimos, the Infested’s ‘tower nest’

What are some of the key new mechanics and features that make this Open World distinct and different from Fortuna and Plains of Eidolon, or even from the rest of Warframe?

Dave Kudirka: Do you like giant centipede creatures? Lucky day. They skitter up and down the terrain, blend into their environment and they are hard targets with their speed and low profile. And the sounds they make are just unsettling. One of many new creepy crawlies to discover on Deimos.

There will be some curious new resources to uncover in Deimos that will help you craft some specialized gear, or, the raw material can feed back into an aspect of loadout tuning (with the Helminth being a part of this interaction). Without revealing too much here, I can say the organic nature of these resources ties in well with themes of biological evolution and body horror that resonates with the Infested theme.

Deimos topography is very different from the previous landscapes with its deep and narrow trenches, oozing rivers, grotto-like caverns, and winding organic tentacles that spread throughout. It feels like a weird living planet with its own biological growth and immunology. The erratic terrain is especially fun to navigate when you leverage your parkour abilities or any vehicle gear you might have already picked up along the way…or perhaps corral the local wildlife for a ride. 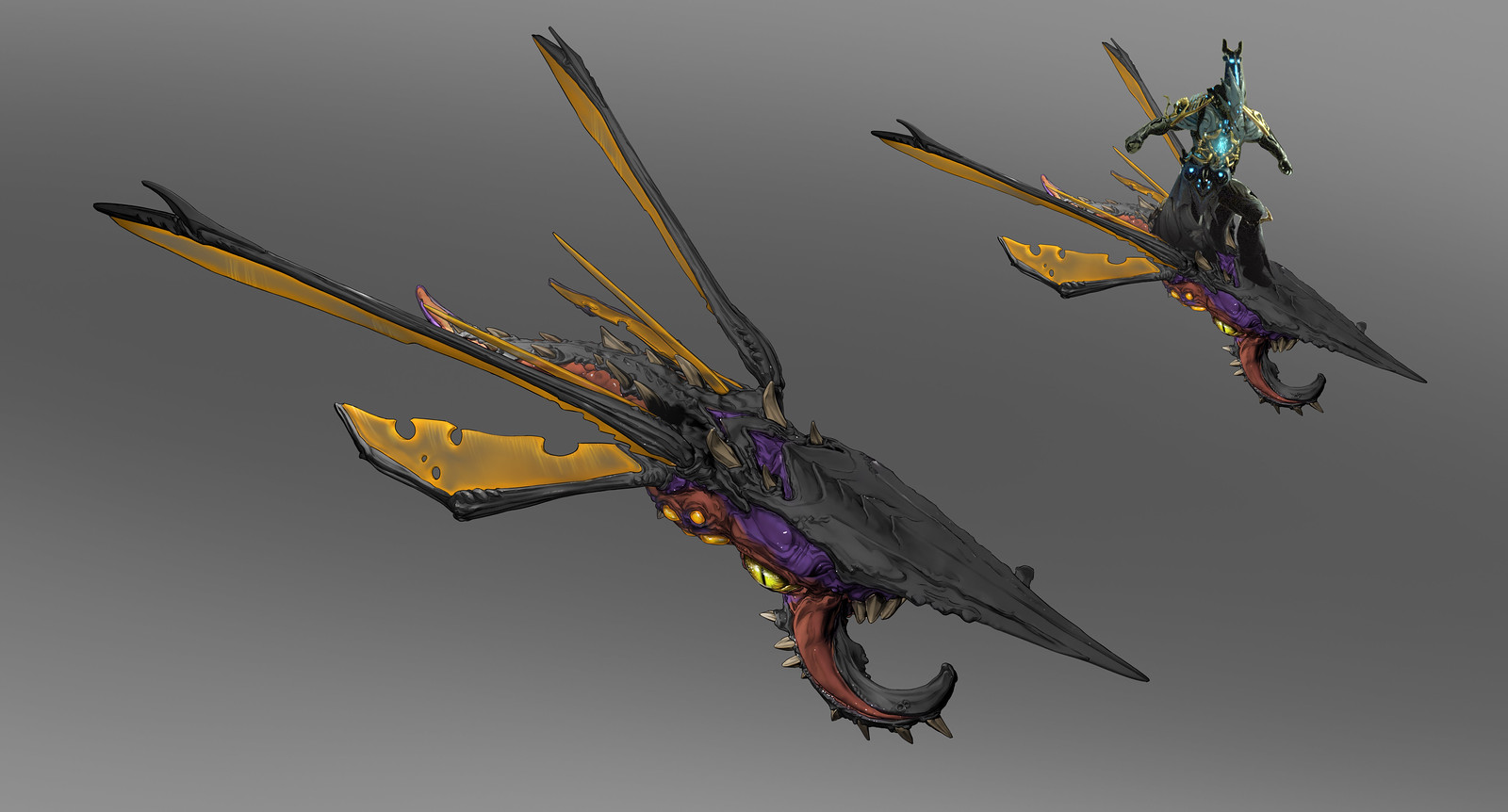 Kary Black: Most prior works were an Infestation of a Corpus, Grineer, or Orokin location; this setting let us look at what would happen if the Infestation was dominant.  The innards of Deimos are a very different experience to run through. The team did a lovely job maintaining the flow of movement, organic angles and created a beautiful and unsettling location.

What are some of the source material, references, or creative inspirations you drew upon for Heart of Deimos?

Kary Black: We are at the point where Warframe is expansive enough that inspiration and source material are within it. We could take considerable reference from the Infested Ancients because we wanted to show a space that was Infested for a long time.

Outside Warframe, there wasn’t a single artist who we could point to, like we did with the Sentient set. There, Zdzisław Beksiński (the Polish painter, photographer and sculptor) had an influence on our surfacing. With Deimos we hoped to capture the mood of a Friedrich painting from the hilltops (Caspar David Friedrich, the 19th-century German Romantic landscape painter), the energy of Mynki’s first Infested sculpts (Mynki is a former Digital Extremes creative artist), and, in our best moments, the lighting and atmosphere paid their due to (English cinematographer) Roger Deakins.

Feeling excited, ready for action, or maybe wondering where to start? Luckily, Heart of Deimos appears early in the Warframe experience. We recommend new players follow the nodes laid out on the Star Chart through to Mars, after which players will see a cluster of moons nearby. And just like with Plains of Eidolon and Fortuna, acquiring an Archwing and a K-drive (hoverboard) would be a good idea, too! That should get you all set up for Heart of Deimos, coming out Tuesday, August 25. See you in Deimos, Tenno!

State of Play: Get a Preview of The Last of Us Part II Wednesday

Among Us PS4, Xbox One Port More Complicated Than You Think