Hi everyone, I’m David Sirlin, head of Sirlin Games. With the release of Fantasy Strike planned for July 25 (at $29.99 USD), I want to give the PlayStation community some insight into the thinking behind the game and why we made it in the first place.

I’ve played fighting games for a long time at a high level. I was top 8 at the huge Evo tournament three times. I represented the USA at the Super Battle Opera tournament in Japan. I know why fighting games are strategically interesting and fun, but it always bothered me that that fun has been out of reach of most gamers, locked away behind genre conventions. I want everyone to have it.

But just about every time I’ve seen a fighting game try to be “more accessible,” I’ve been disappointed. That can mean dumbed down, or it can mean training-wheel features that you can’t use competitively, or sometimes it means some easy controls that have some kind of drawback to use. It feels like trying to make a motorcycle by sawing a car in half. I’d like to try actually making a motorcycle. 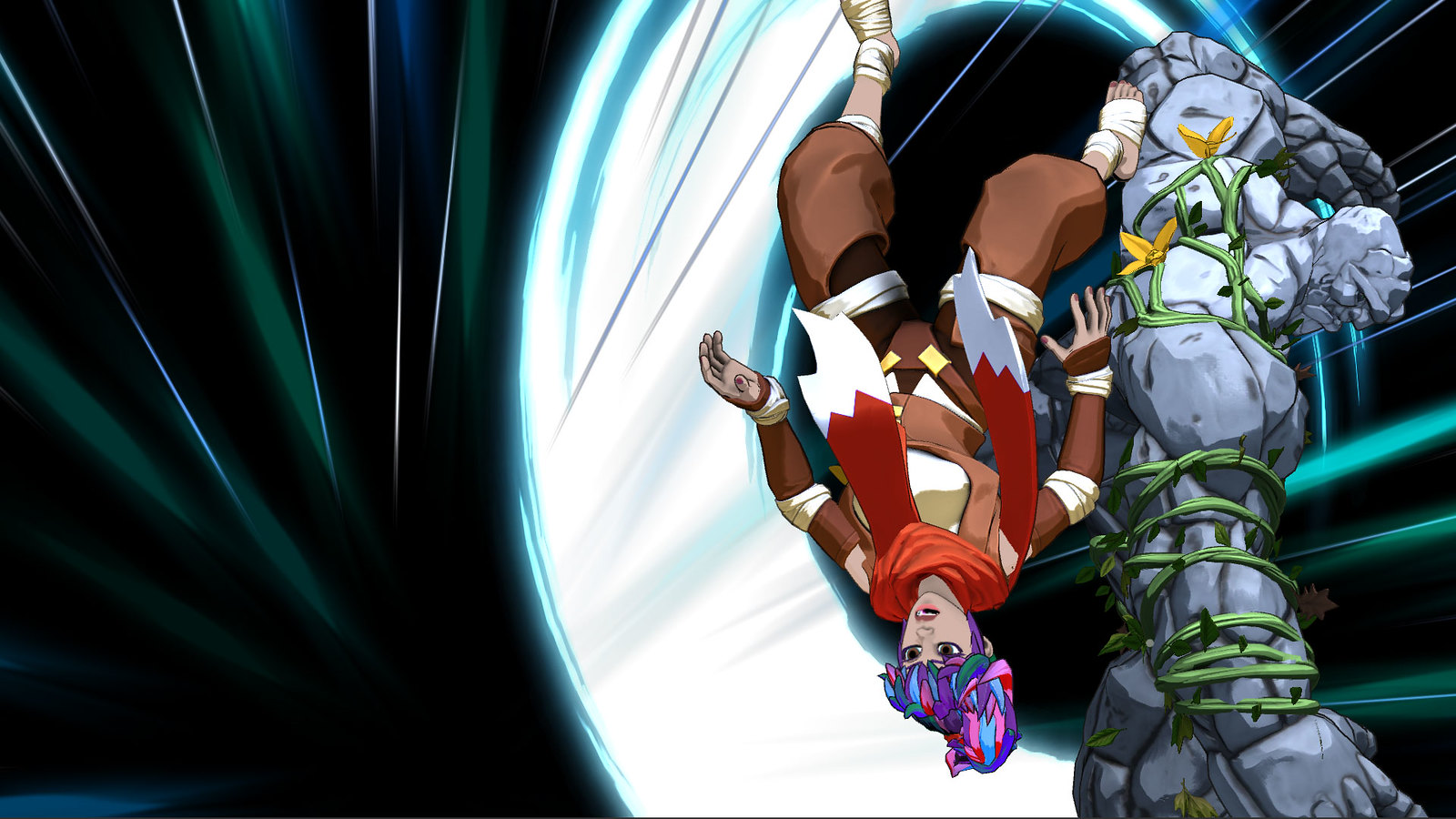 Experts And Beginners Both Need Some of the Same Things

What we’re doing with Fantasy Strike probably sounds like a contradiction, so I’ll walk you through it. We’re making a deep competitive fighting game designed for experts and tournament play… that also just happens to be great for people who have never even played a fighting game before. “Impossible!” you say.

I want players to experience the depth of the genre that I’ve experienced. To participate in a deep competitive game, you’re basically doing this sequence over and over: 1) understand the situation you’re in, what your options are, and how they all work, 2) make a decision about what to do, 3) execute that decision so it really happens in the game. A deep game is one where all three of those steps work well, and the quantity and quality of these decisions the game offers is high.

To Make A Decision, You Have To Know What’s Going On

Fighting games have generally been very bad at that first step: being readable, understandable, and learnable. Fortunately, no depth need be sacrificed for this. It just requires good UI and some elegance. This is why Fantasy Strike has an unusual health system of discrete hit points — 6 hit points for most characters. A 3-hit combo does 3 damage and it’s very clear if it will kill the opponent or not before you even do it. It’s also why the super meter fills automatically over time: because it’s simple to understand.

It’s why we have colored highlights on our characters to tell you whenever a move is invulnerable (white), armored (blue), or is a parry (green), and whenever your character got counter-hit (red) or is poisoned (purple). It’s why we have a move list for each character that fits on one screen, so you can easily understand what your character can do. It means we had to work extra hard to make every single move useful, often with many different uses, but we think that effort was worth it.

The idea isn’t that you’ll instantly react to this stuff, but it’s a way to understand that a certain move is extra safe, or extra unsafe. It’s a way to know that a certain move is usually unsafe, but if you do it at the very tip from far away, it can be safe. It arms you with the knowledge you need to make better decisions and it helps everyone from newbies to tournament pros. 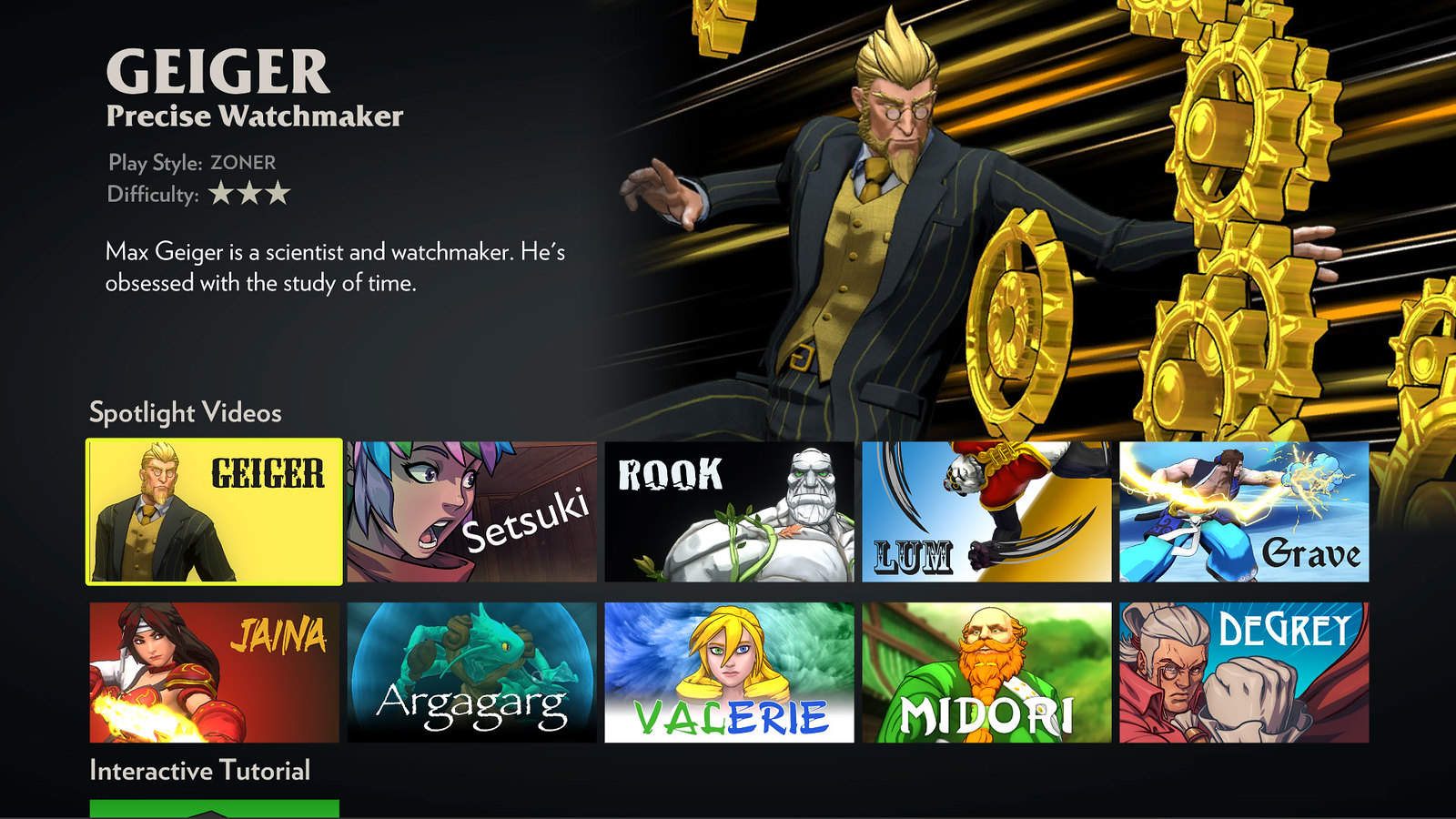 Something we did specifically for beginners though we made a Netflix-like video selection screen that looks like every character has their own TV show. From there, every character has a spotlight video narrated by me that explains all the moves and properties of that character and what their gameplan is.

For A Decision to Count, The Action You Intend Has to Really Happen

The other half of the depth equation is execution. We’re committing to being a decisions-first game focused on strategy, so if you intended to do something, we need to do everything we can on the programming side to make sure your intent really happens in the game. That’s why we have a huge input buffer that makes combos really really easy. You can just tell someone a combo out loud, probably like “Jump A, A, B” or something, and they can do it. The hard part is getting in a situation where you can really land it against a good opponent.

Often in fighting games, you need to do an invulnerable move like a super right when you get up from knockdown, or right when you leave blockstun. If you intend to do it, it will easily come out every time at the first possible moment in Fantasy Strike. We’ve done more things than we can even mention here to make sure your moves come out when you want every time, but I hope you get the idea.

Depth Comes From Testing and Tuning Over Time

I think it’s easy to see why all these things above help beginners, especially those who have never played a fighting game before. What might seem surprising until you think about it, is that it helps us make a deep game for experts too.

We’ve had the unusual situation for the last four years of developing this fighting game that every time we test it, everyone can do optimal punish combos every time. Everyone can do all the techniques. Sort of like how everyone can move all the pieces in chess. Usually in fighting game development though, things get so difficult to execute at the expert level that testing “the real game” is very hard. So few people can even “move the pieces” correctly that balance problems can go unnoticed for a long time, and ultimately make a game shallower. But any time we had something shallow or degenerate, it was immediately obvious because the spotlight is right on player-decisions. It was sure a lot easier to ensure high level play is rich and varied than it would have been for most other fighting games. Spending four years on it helped quite a bit too, lol.

I also want to mention at least briefly that online play is really important to us. We use a technology called GGPO plus our own proprietary sauce that makes online play especially smooth and responsive feeling, minimizing input delay. I live in California, and I’m able to play a friend in Tokyo and our games feel almost impossibly smooth. We really hope you try the online play!

Another big factor in the online experience of any game is the UI. Fighting games have generally had convoluted, confusing UI just to play someone online. We’re trying to really stand out from the crowd here by having a simple single click to challenge a friend. You have an in-game friends list and you can just click anyone to challenge, and if they accept, you’re put in the same gameflow as if they were sitting next to you in the same room.

And we also let you watch any friends match with another single click from that friend’s screen. You’ll even automatically follow them and watch all their online matches in all modes automatically. We haven’t seen this before in any other fighting game.

I hope that gives you a taste of some of the things going on in Fantasy Strike. We’ll see you online next month at launch!