Greetings, everyone! This is Matt “Bayohne” Hilton from the Final Fantasy XIV Online (FFXIV) Community team, here to deliver PlayStation.Blog readers a behind-the-scenes look at how the dev team brought the Ruby Weapon to life in FFXIV.

Final Fantasy fans will no doubt recognize the Ruby Weapon as a challenging boss that players were able to battle in the desert outside of the Gold Saucer in FFVII. FF fans may also be aware that Final Fantasy XIV loves paying homage to the previous titles in the franchise, whether it be with locations, themes, or in Ruby Weapon’s case, even bosses.

The most recent update to FFXIV, Patch 5.2 — Echoes of a Fallen Star, introduced the hulking Ruby Weapon as a brand-new 8-player trial for adventurers to tackle in both normal, and high-level difficulty “extreme” modes. We sat down with a few members from the team to discuss the inspirations and challenges they faced to introduce such a unique and iconic foe to the game.

How much did the team look to Final Fantasy VII for reference or inspiration when creating the encounter? Whether that be from a visual standpoint or its attacks and movements.

And, can you talk about the team balances preserving aspects of the original while providing a FFXIV flair? Would you say that this design is heavily based on the FFVII version of the monster, or is it more of its own thing?

Let’s talk visual design first. Whenever we bring an existing Final Fantasy series character to FFXIV, there are two general paths we might take in terms of character design.

In some cases, we will keep the FFXIV version true to the character’s original design — we don’t add any elaborate or original flair, but rather honor the design as it appeared in the original work. We would aim to recreate the character in a high-quality graphic environment while trying to make sure it doesn’t look unnatural. A recent example can be seen in the characters that appeared in the Interdimensional Rift Omega raid series from patch 4.x. 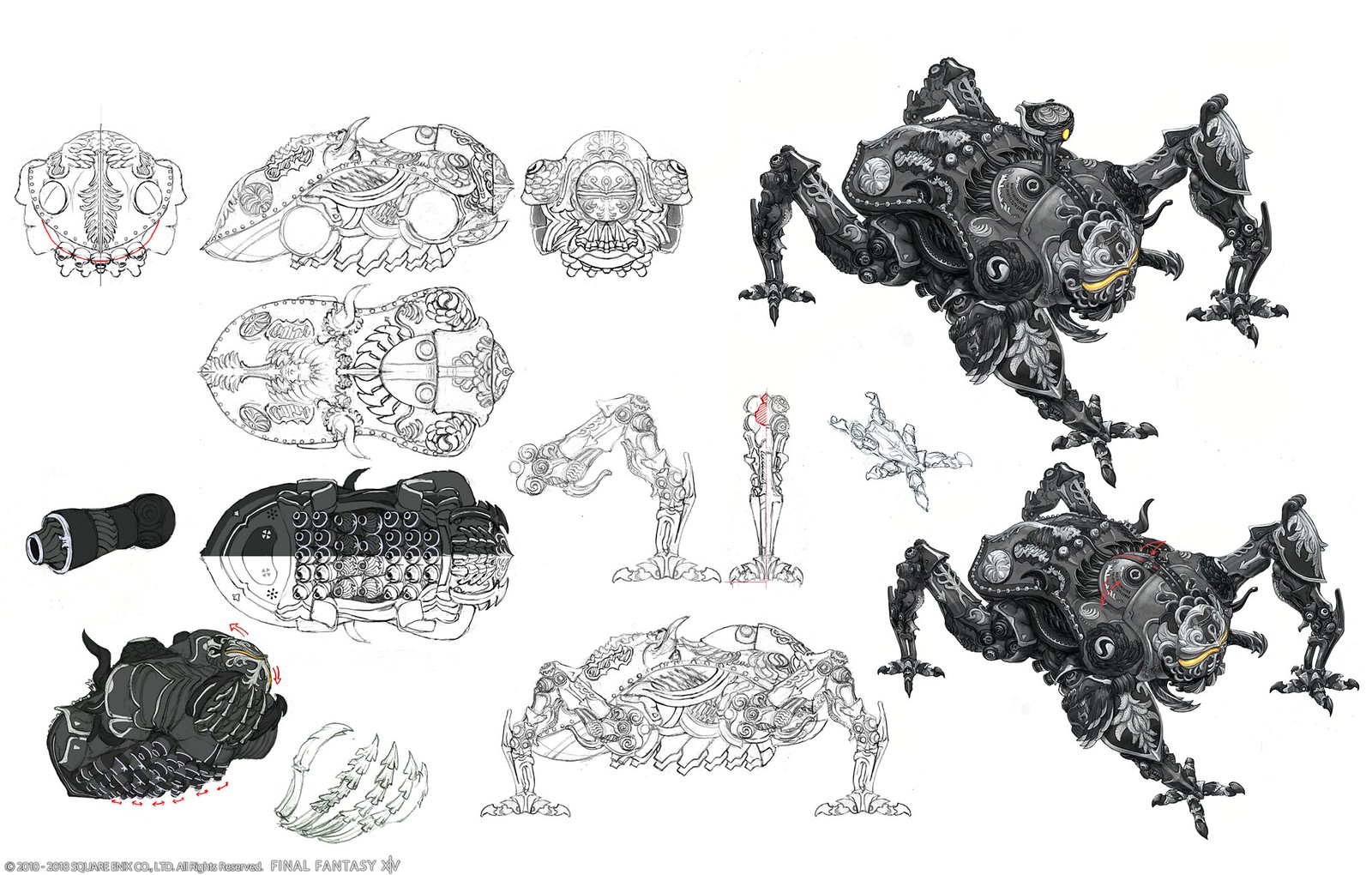 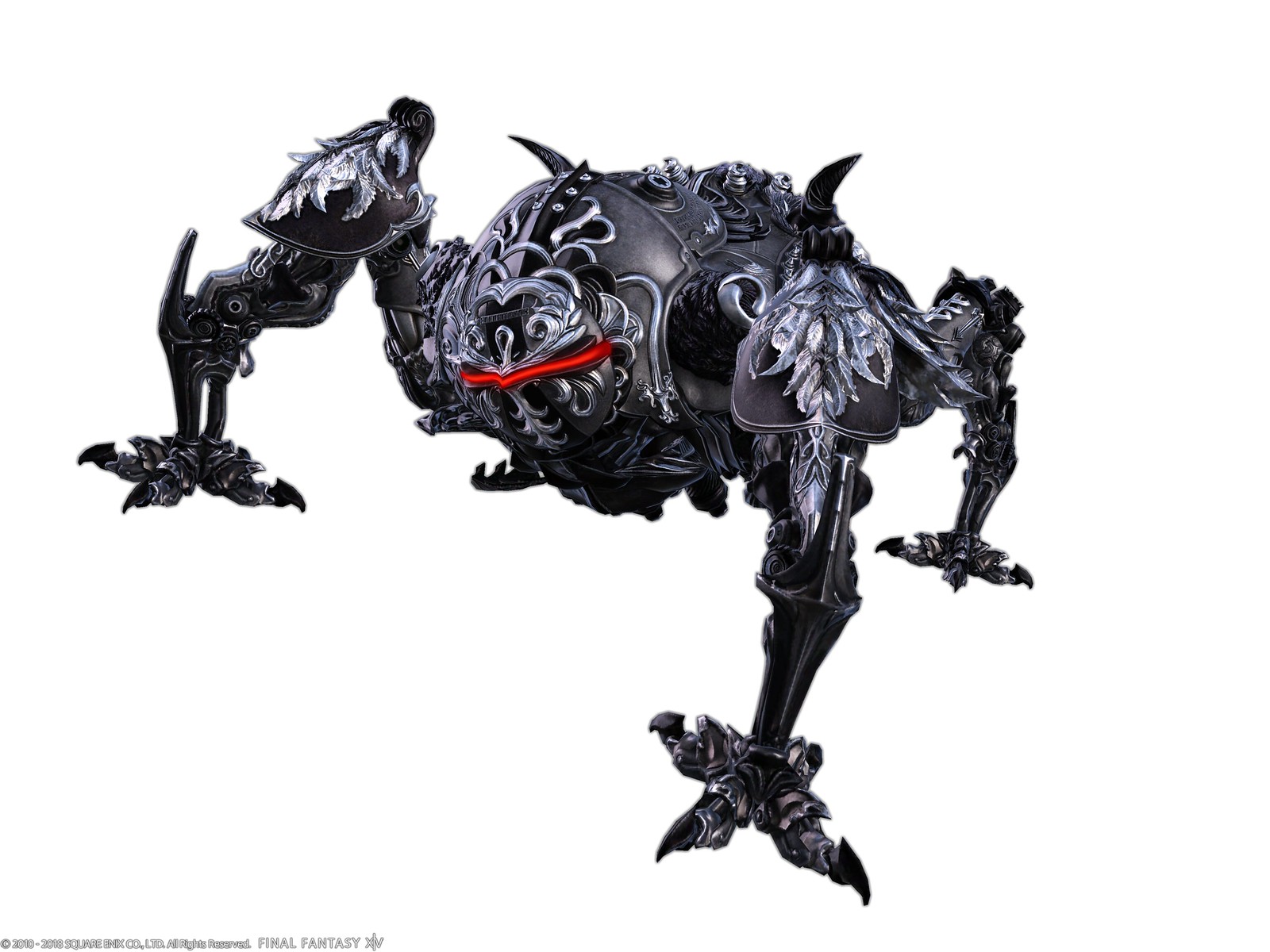 In other instances, we’ll take only the name and basic characteristics of the original and add our original design to help blend the character in to the world of FFXIV. We have quite a few examples of this as well: cactuars, chocobos, Garuda, Titan, Ifrit, Leviathan, Shiva, and Ramuh just to name a few. The Ruby Weapon in FFXIV leans more towards the latter path, but that isn’t to say it is completely original. We still paid respect to its visual appearance in Final Fantasy VII, finding a balance between keeping the original characteristics well-preserved and bringing out some originality. 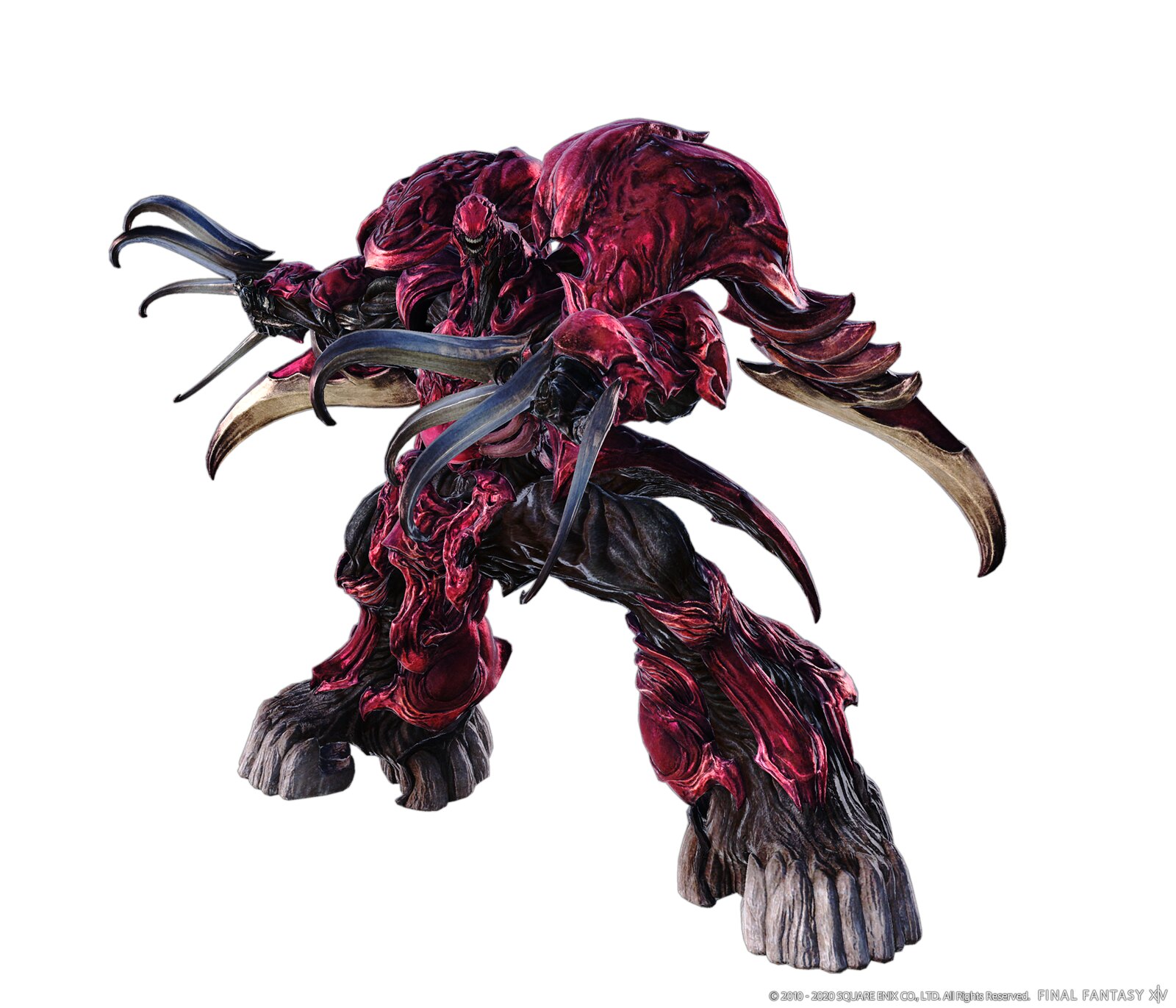 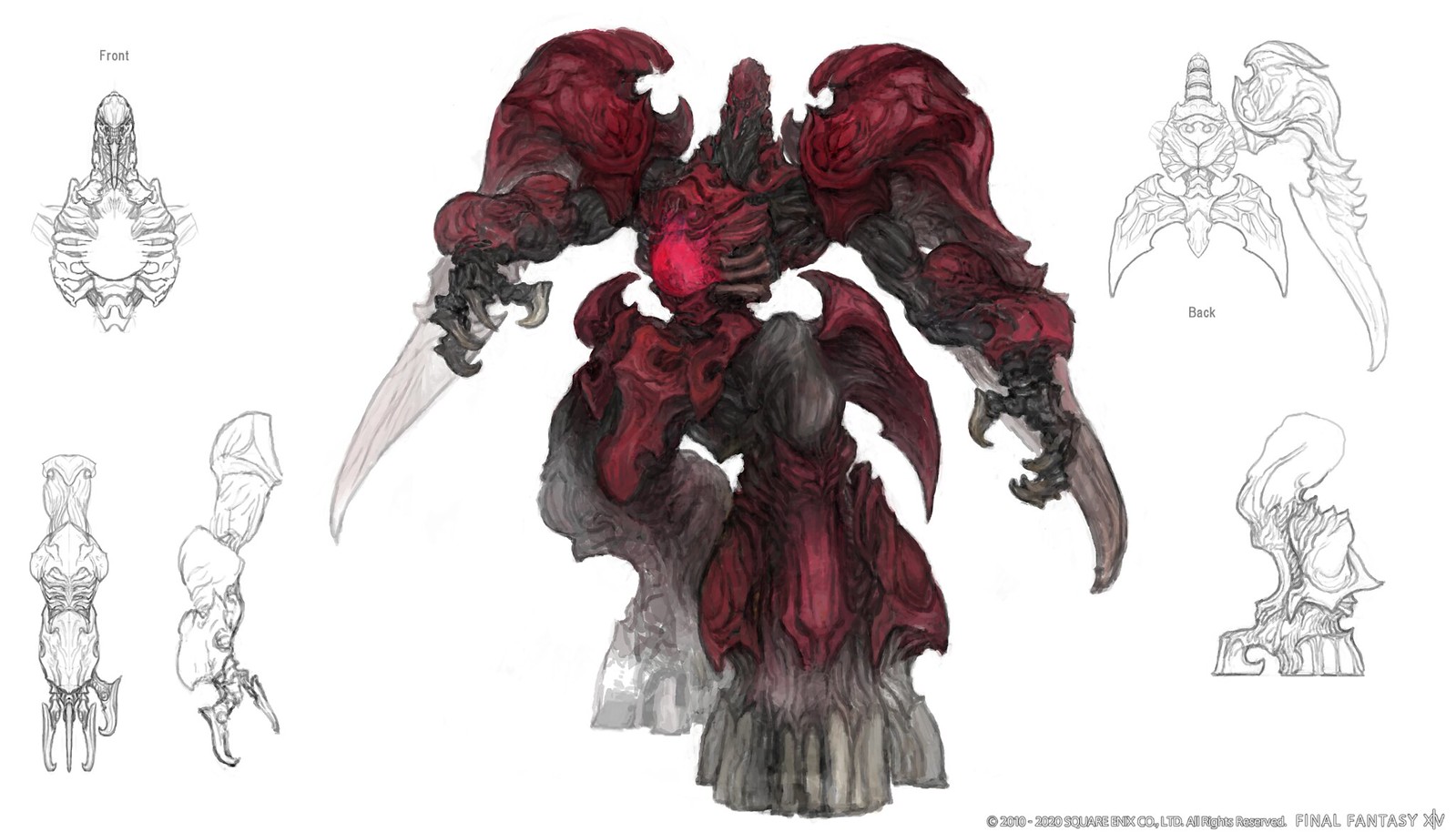 Next, let’s talk a bit about the design from a battle perspective.

Final Fantasy XIV’s Ruby Weapon has a deeply intertwined lore and story behind it, and the battle content places heavy emphasis on highlighting those points. We spent a great deal of time devising ideas for battle mechanics that would feel fresh and new. Our goal was to make the gameplay experience feel as close to an action game as we could possibly make it within the parameters of FFXIV battle mechanics, and there is a heavy focus on rapid attacks in succession. We poured a lot of time not just into the brainstorming, but also on animations, the creation of visual and audio effects, and programming the fight. 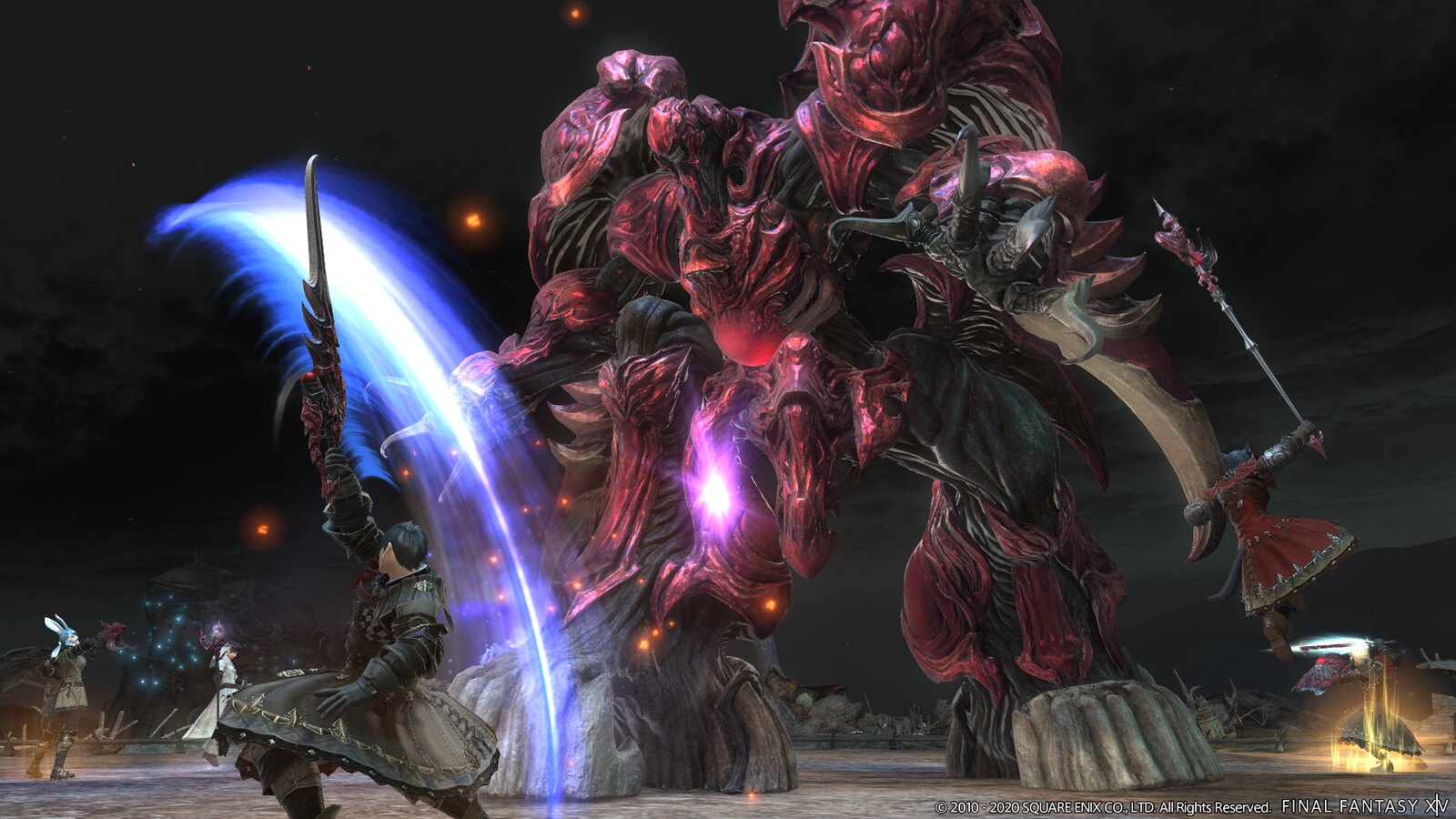 I think perceived difficulty levels will differ from player to player, so it’s difficult to answer this by simply comparing the fight with other extreme trials. However, I can say that the team who fine-tuned the battle content all said that Ruby Weapon is more difficult compared to Titania (Extreme) and Innocence (Extreme) from 5.0. 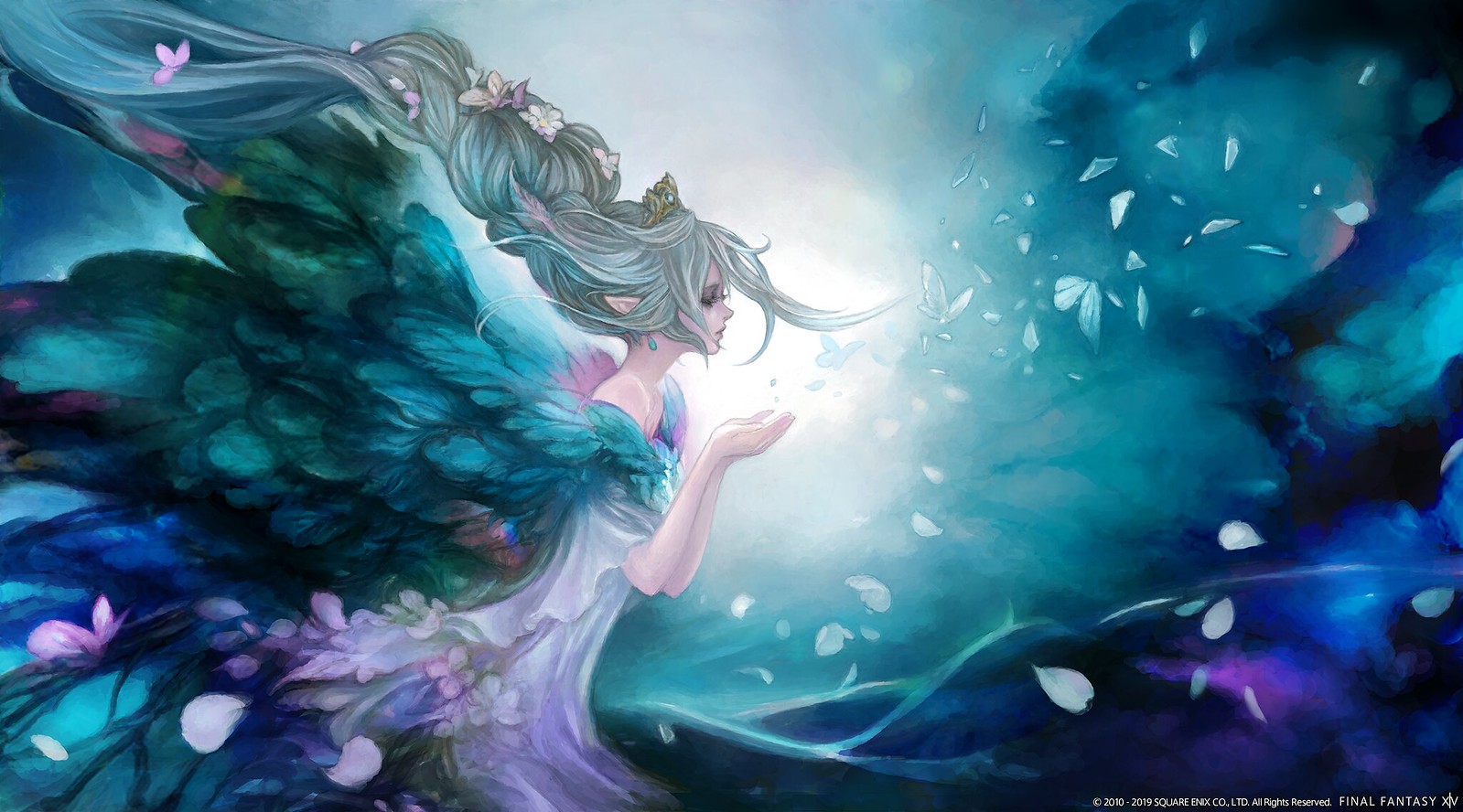 There are many new battle mechanics in the Ruby Weapon (Extreme) encounter that were never seen in any other extreme-tier trial, so I also feel that it might take a bit more practice in order to get past some of these. At the same time, this means that players get to experience new mechanics and new possibilities when it comes to FFXIV battles, so I hope that it provides an enjoyable gameplay experience that feels both challenging and new.

Are you able to tell us some details regarding the creation of the weapons that players can obtain in the extreme trial? During the design and creation process, what aspects of Ruby Weapon did the art team use as inspiration to create these weapons?

Are there any designs that you feel bring out the “Ruby Weapon feel”?

Generally, my request to the team for any weapon that players obtain through extreme trials is to include visual motifs that reflect the boss’ design. I believe it’s important to be able to show something to other players that says, “I cleared this boss!”

I hope that seeing these weapons will serve as a catalyst for communication between players who haven’t attempted the trial and those who have completed it. 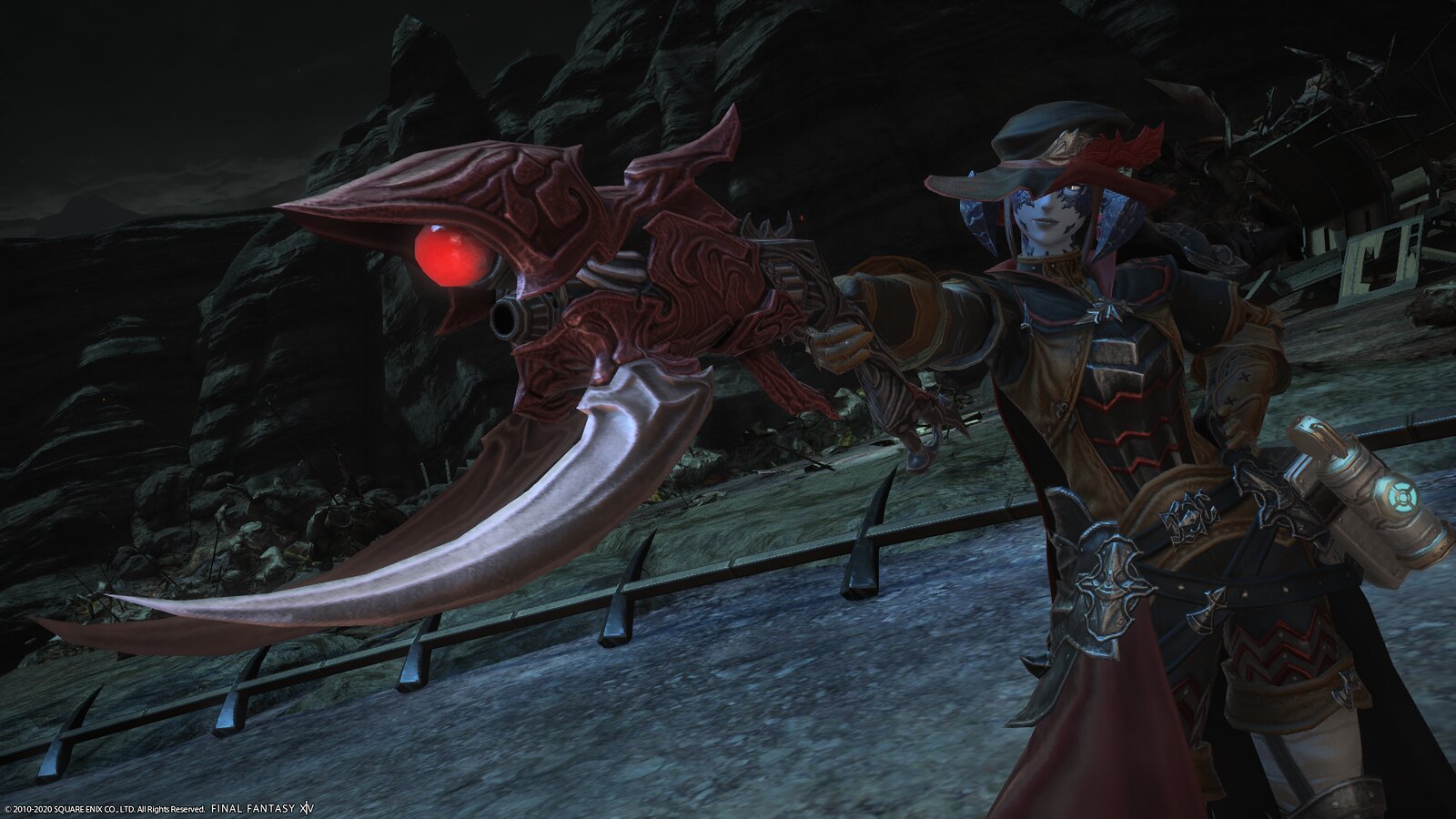 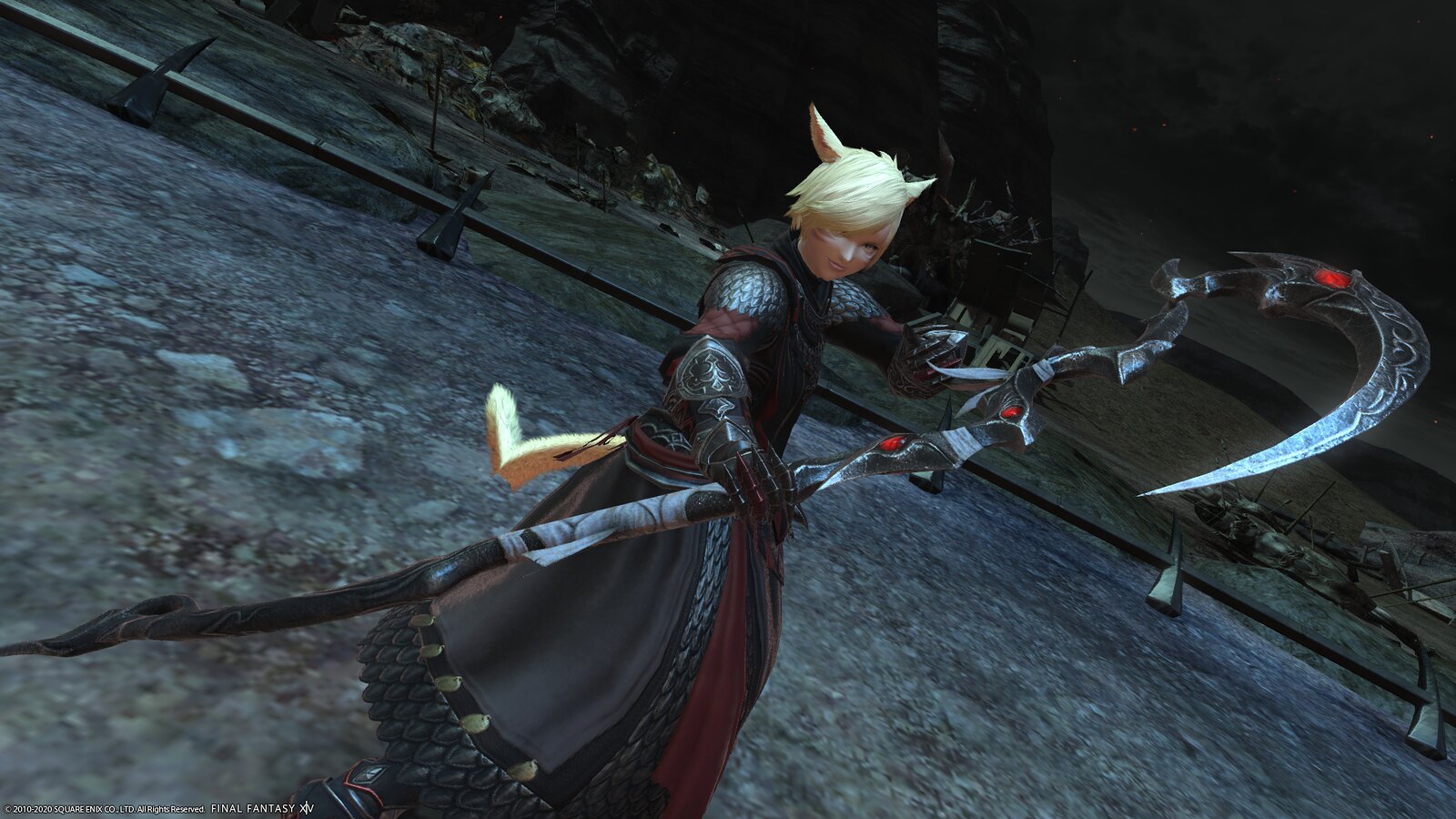 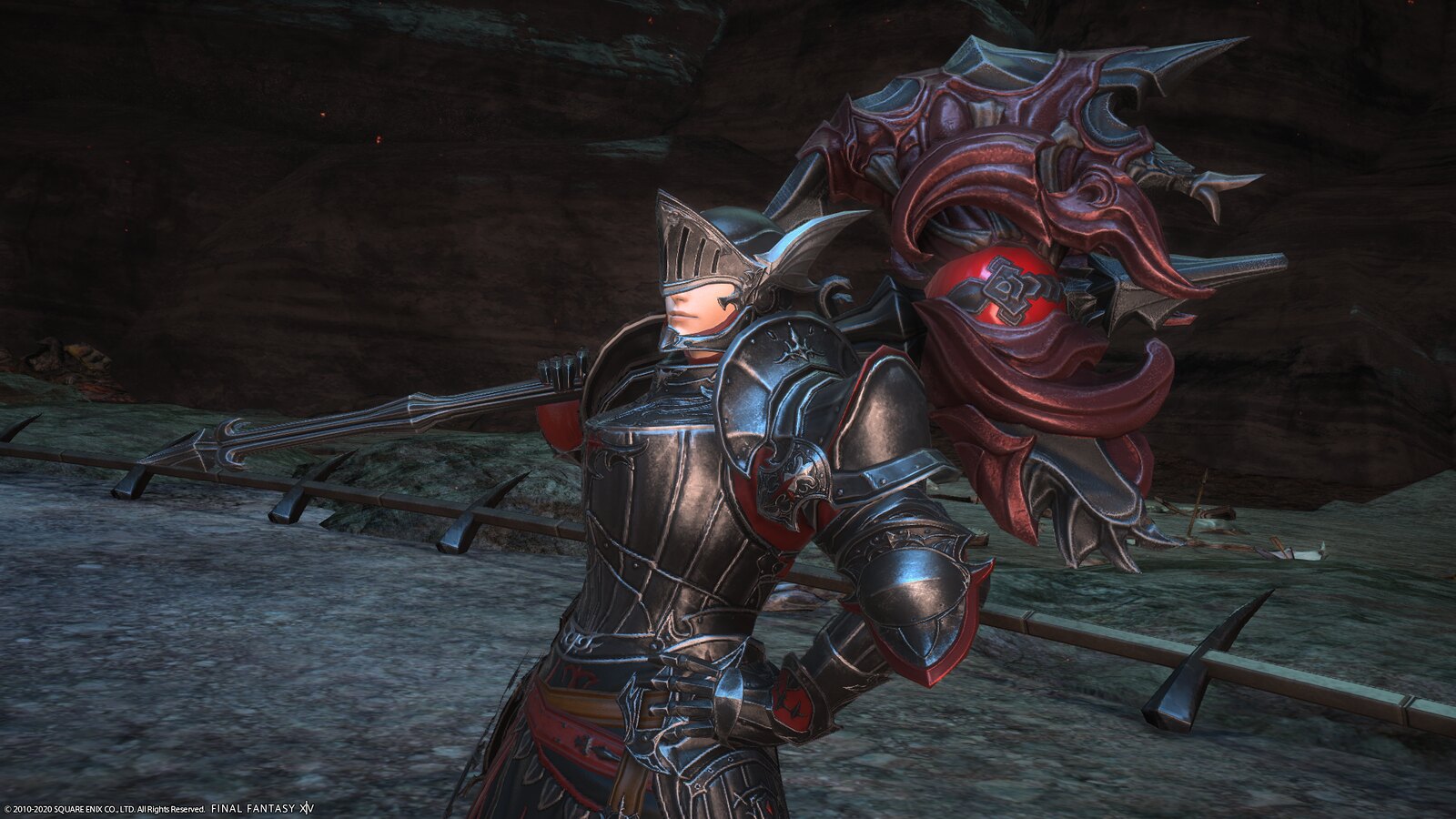 Diving deeper into the designs, the weapons for the Ruby Weapon trial were designed with the concept of integrating machinery and organic life forms. As this is close to design concepts that were adopted in Japanese anime in the 80s and the 90s, I was particular about creating a design that felt somewhat nostalgic but also had something that felt new — a ‘je ne sais quoi’ element, if you will.

Switching gears over to the music, we have a question for Masayoshi Soken! What inspiration did you look to when composing music for this encounter? Were there any particular points from the fight you had to consider when crafting the music?

I had some lengthy discussions with Main Scenario Writer Natsuko Ishikawa regarding the music for the Ruby Weapon battle. Ishikawa had two requests: to include an arrangement of Ultima — Ultima Weapon’s theme, and to create a song with a quick tempo to match the battle content.

During these discussions, I remember that I also had a recording session planned for The Primals for something completely different. When I told Ishikawa about this, she asked if The Primals could create an arrangement for the Ruby Weapon music. The thought of The Primals arranging Ultima sparked a flame in my creative soul!!! I dove right in and started prepping, creating a mockup version and making edits to mesh with the battle content. I really thought to myself, “This is a perfect match for this battle! This will work!”

However, during the recording session the other band members and I went through much trial and error trying to create a track with this quick tempo…and that is where we hit a wall. We were originally supposed to be done with the recording in half a day, but we kept extending our recording session time over and over. We ended up using the whole day, and it was early morning by the time we left the studio…lol.

And finally, for our readers who may have tackled Ruby Weapon over the years in Final Fantasy VII, do you have any advice for them as they look to defeat Ruby Weapon? What do you hope those who have also fought the original will enjoy in this encounter?

As mentioned earlier, some of the attacks that the FFXIV version of Ruby Weapon uses took inspiration from those of the FFVII version. I’m sure players would notice these instantly if they challenge the Ruby Weapon trial. I hope players who have had the experience of taking on Ruby Weapon in FFVII enjoy challenging this FFXIV version, keeping an eye out for these details, and enjoying the trial from a different angle.

Of course, in order to ensure players who don’t know the FFVII version of Ruby Weapon can also enjoy the trial as much as possible, the FFXIV version has been linked with a well-crafted story specific to FFXIV.

The Patch 5.2 main scenario questline will introduce elements of mystery for the players. For example, the Ruby Weapon this time around was loaded with Nael van Darnus’ system data, but what kinds of systems will be loaded in the future Weapon series that we have yet to see? I hope players enjoy the trial while looking ahead into future developments with questions like these in mind.

Huge thanks to the team for taking the time to offer a deeper insight into the creation of the Ruby Weapon battle in Final Fantasy XIV!

Confront Your Immortal Nemesis in Warframe’s The Old Blood Update

You can now use Alexa and Cortana to control your Xbox

BoxVR Gets its Biggest Update Ever Today