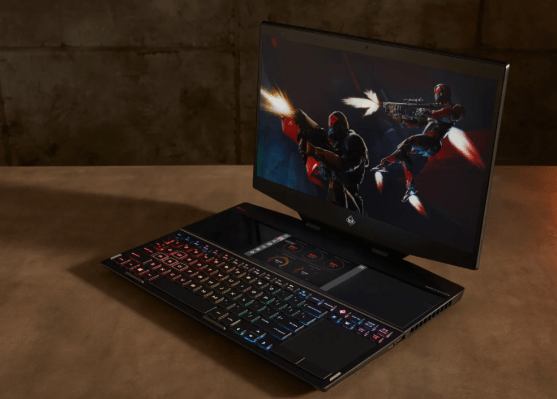 There’s something about gaming laptops that make manufacturers do weird things. It’s kind of wonderful, in a way. Companies tend to give their teams a much wider berth for strange and novel designs, and HP’s Omen line is certainly no stranger. Designs that tend to be relegated to the concept shelf of history actually hit the market, and indeed, the Omen X 2S is currently on target for a May/June release.

The defining characteristic of the $2,700 notebook is almost certainly the inclusion of a second screen that lives just above the keyboard. HP’s not the first to attempt such a thing — in fact, we might actually be approaching a trend here. The six-inch secondary display is considerably smaller than the 15-inch mean dealie.

It’s designed to provide supplementary information at a glance. While the idea of a secondary screen has been around for some time, I do think HP’s at least being fairly realistic about how it will primarily be used. Rather than assuming that game developers are going to create content specifically for the 1080p touchscreen, HP suggests that gamers will almost certainly use it for other apps entirely.

It suggests chatting in WeChat and WhatsApp, using Spotify and watching Twitch and YouTube videos. In other words, it will essentially serve the same function as just sticking your phone on your laptop — but this one is built-in. Oh, and HP sells “Omen apparel” now, so you can coordinate with your new dual-screen laptop.