Betrayed and left for dead, Mr. Wolf is hell-bent on finding his killer and enacting revenge — alone, and vastly outnumbered.

It’s me, the mullet-wearing co-founder of Paper Cult, Raph Toulouse! We’re a small eight-person studio from Montreal bringing you Bloodroots.

In Bloodroots, the world is your weapon. Everything in the environment can be picked up and will change how you get around and how you dispatch any of the hundreds of enemies. For example, a ladder can be spun around to crush your enemies, to fly over gaps, or it can actually be used as a ladder to get up on higher terrain. The game moves at a breakneck speed and it’s all about improvising the deadliest of combos as you experiment with what you find.

Our creative process is greatly influenced by the work of Quentin Tarantino in terms of creating a patchwork of a wide variety of influences to generate something new and interesting. As so Bloodroots proudly puts forward many of its influences ranging from a bunch of different medium. We thought I’d go through some of those so you get a sense of where we’re coming from.

Dennis and Jonathan from Dennaton (wow they just mashed their two names together) really changed the game for fast-paced action games in 2012 with Hotline Miami. The thrill and euphoria that came from the improvisation of juggling with different weapons so quickly to clear room after room of bad guy, was just never seen before. You’ll definitely see some of this in Bloodroots. 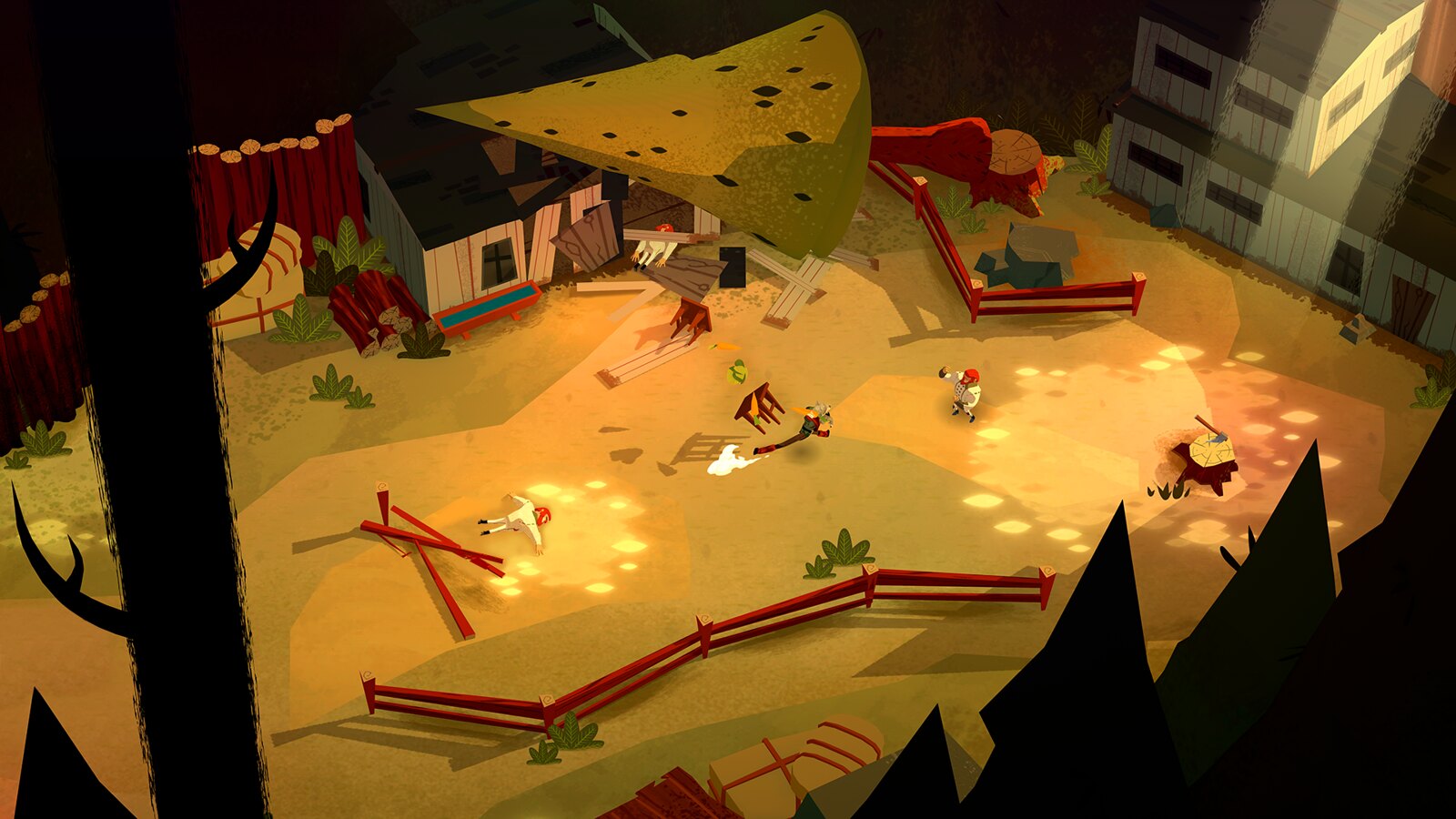 Talking about improvisation, Jackie Chan is the master of improvising with everyday objects to use them in over-the-top action scenes. There’s a scene from Police Story 4: First Strike where he wields a ladder in so many different ways — it’s so amazing. We had to have a crazy spinning ladder in the game as well.

Fans of the series might have picked up on this one from the moment they saw a screenshot, but the art from Genndy Tartakovsky’s series had a profound impact on the game’s visual direction; from the textures to the over the top character animations to the use of background and foreground elements. To be even more specific, the work of Scott Wills on Samurai Jack had a deep impact on our art direction research.

There’s no going around it, being French-Canadian, we’re giving the world of Bloodroots our own nordic touch. The Revenant was a good reminder that the America of the 1800’s hasn’t been exploited a ton yet and could be the setting, not only of historical pieces, but also fun action movies. We refer to this era as the ‘’western prequel’.’

While we wear our inspirations of our sleeves, Bloodroots is definitely more than the sum of its parts. Thankfully, you can experience Mr.Wolf‘s revenge quest through the Weird West yourself when the game comes out this summer on PlayStation 4. We’ll surely have more to discuss as we get closer to the game’s official release. Talk soon!