Inside the Art and Animation of Super Neptunia RPG, Out June 25

Hi everyone! I’m Julien Bourgeois, co-founder and Game Director of Artisan Studios in Canada. We are a passionate group of developers who love JRPGs and have played them for many years now. We really wanted to be part of this incredible world of adventures, so we were thrilled when we got the opportunity to collaborate with Idea Factory and Compile Heart in Japan to co-develop Super Neptunia RPG which releases in North America on June 25 and across Europe on June 28!

Super Neptunia RPG is a side-scrolling RPG starring Neptune, our self-aware and self-proclaimed heroine who can fully explore the 2D environments with her impressive platforming skills. There are no random encounters. Instead, enemies roam around the map, so when Neptune bumps into them, the game transitions into an Active Time battle system with rotating characters and gorgeous animations. The series has been around since the days of PS3 and is perhaps most well-known for its references to other video games and allegories for the industry as a whole.

It was challenging for us was to translate this rich universe into a 2D game, so we’d like to share how we developed the background art and 2D animations in Super Neptunia RPG and what it was like to collaborate internationally. 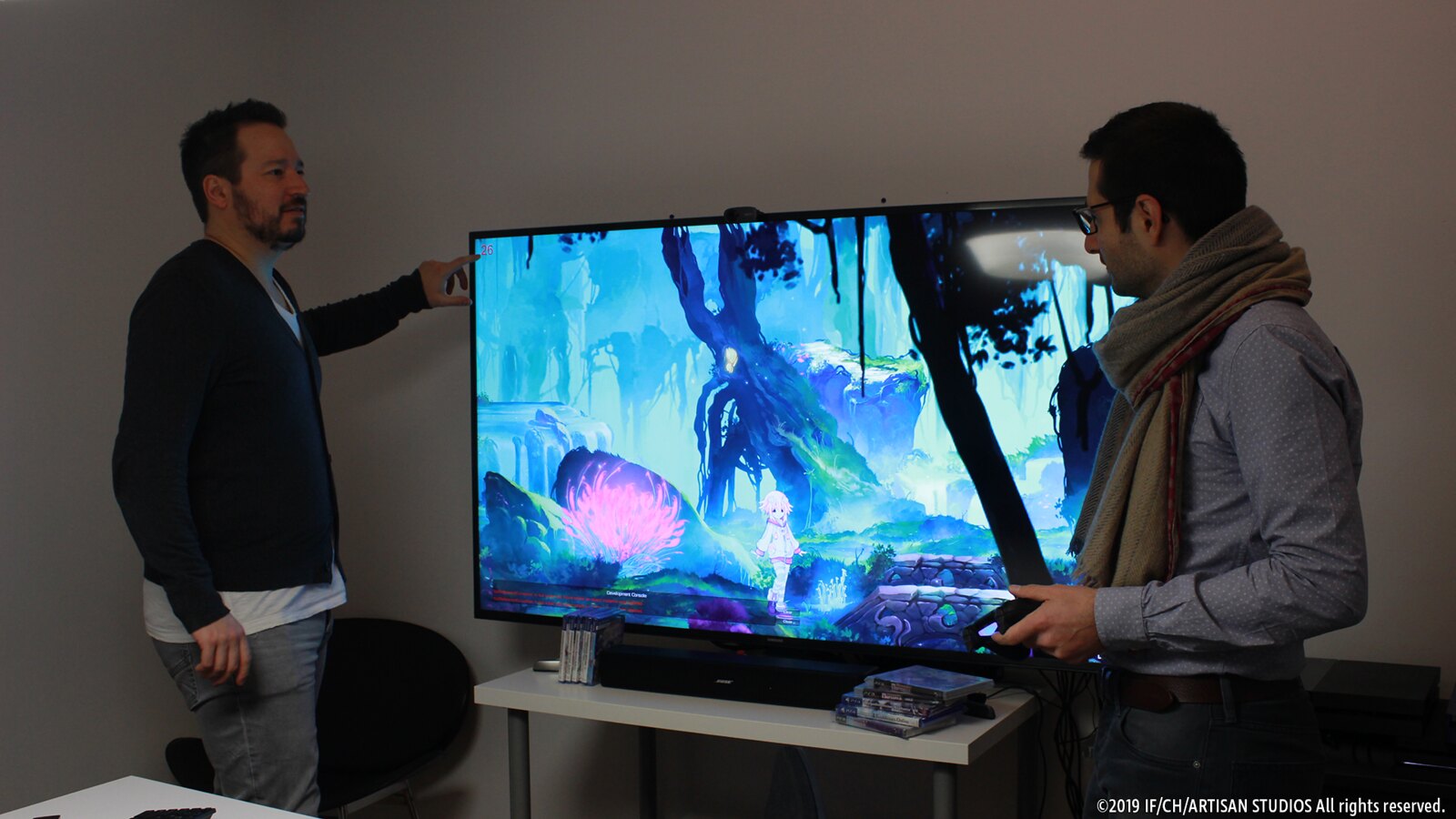 There are several steps we have to take to make sure that our work is manageable yet also faithful to the artist’s vision, so we had to explain our animation process, techniques and limitations to Compile Heart. First, we determine a base pose (usually the character’s idle state) and make all the other possible poses based on that. All new poses require rough animation research and validation to make sure the movement fit the characters’ personality. Once we’ve figured that out, we can start cutting and drawing additional needed parts. The rest is hard work and magic!

We use a mix of cut-out animation, traditional frame-by-frame animation and tools that help blend these different animations together. It’s a process we’ve been working on for years and trying to improve on every new game we do. It’s a very long and detailed process where you have to cut the character’s parts, attach them to a skeleton and animate it all together in a coherent way. We even assigned characters based on the personality of our animators so life could be given to each of the characters in a more natural way.

We made a fun test with Neptune and another character, Noire, and gave them some crazy movements, but then we figured that we needed more information in order to stay true to their personalities. Compile Heart provided us detailed guidelines on each part of the characters’ design: clothes, hair, face, and animation limitations. Animations are done by hand Instead of using physics, so we have to find clever ways to simulate movements. There were plenty of bones and controllers on the characters, sometimes used specifically for a single pose. Our challenge was to find a balance between each character’s design constraints and avoiding the feeling of a paper-cut style that might feel “flat.”

We also listened to the characters’ voices so we could match the emotions given by the actors. For example, we had to show joy and spontaneity for Neptune, so her animations are more exaggerated than others (she has more than 30 unique face animations in the game). We had to create a new solution to handle that many different expressions on a character’s face and to implement them in our engine.

Aside from character animations themselves, we also consider the background to be another type of ‘character’ in the game. When creating backgrounds, you want to tell a story for each town. We use parallax to simulate depth in our 2D environment. This involves elements of the foreground scrolling at a different speed from elements in the background. Design-wise, Idea Factory laid the groundwork for us to give personality to each city. As every city references a certain gaming console/brand, the artists could use specific elements known by the players to shape the cities. For example, Lastation (the city that represents Sony’s gaming platforms), incorporates shapes from PS2 and PS3, colors from the PlayStation logo and all kinds of small elements that reference the PlayStation brand. We could also use the characters (Noire in case of Lastation) to make it consistent with the city she’s representing. We applied the same process for the four cities. It was really interesting and fun to take inspirations from objects that have nothing to do with a city in the first place.

In general, it takes between 10 to 15 days for one artist to create all the elements for one level, so a lot of time went into each area! Implementing the art into the game was a joint effort between the art team and the level designers to make sure it felt satisfying from both a gameplay and visual standpoint. It required a lot of back and forth between the two teams to adjust the placements of the visuals on one hand and to draw additional elements on the other.

There’s a lot of heart, love and effort in Super Neptunia RPG. We loved working on it and we hope it shows. Existing fans will be pleased with the storyline and the new characters but you don’t need any knowledge of the previous games to understand or enjoy it, so it’s a great starting point for new players too! Take your time so you can discover all the nice things to do regarding quests, NPCs, ultra-powerful weapons and skills. But to find them you need to look carefully into the environments for potential hints on hidden secrets. I really hope everyone enjoys the game when it releases on June 25 in North America and June 28 in Europe!