Sometimes, in order to move forward, one must move back. To break a stalemate amongst its board members, the Corpus, the money-loving, cult-like enemy faction at the heart of upcoming The Deadlock Protocol, does just this — it resurrects the past. In a sense, that’s what we’re doing too.

Very shortly, we will deliver a rigorously remastered, re-imagined update with The Deadlock Protocol, the earliest tileset in Warframe. Delving into the Corpus Faction content, originally introduced in 2013, we have refreshed everything from graphics, story, gameplay and presentation for players in 2020. This isn’t just a visual overhaul, the layers of redesign, modernization, and tuning run deep.

To provide insight into the remaster’s design, functionality and fun, long-time dev-team Producer Dave Kudirka and Environment Art Director Mat Tremblay have opened up to offer insight into what makes this update tick, and why.

What makes The Deadlock Protocol different than other Warframe updates?

Dave Kudirka, Producer: We are revisiting the very first Warframe tileset, which is already something special in itself. At the time of initial development in 2012, the entire Warframe team was less than 20 people. Jump to today: the development team has grown significantly (more than 200), the Warframe universe has expanded, and we have a better understanding of the stories we want to tell. The expectation we put on ourselves was that the re-imagining of the Corpus tileset (a term we use to describe the environments randomly generated in an area) would include new enemies, challenges, and world-building that can surprise and delight new and veteran players alike.

Mat Tremblay, environment art director: One of the best things about working on a game that has been going for this long is that you get to revisit things. The game, our engine, our universe, all these things have evolved over the life of Warframe. This means that the content and levels we made in 2012 can now get the benefit of what we know in 2020. 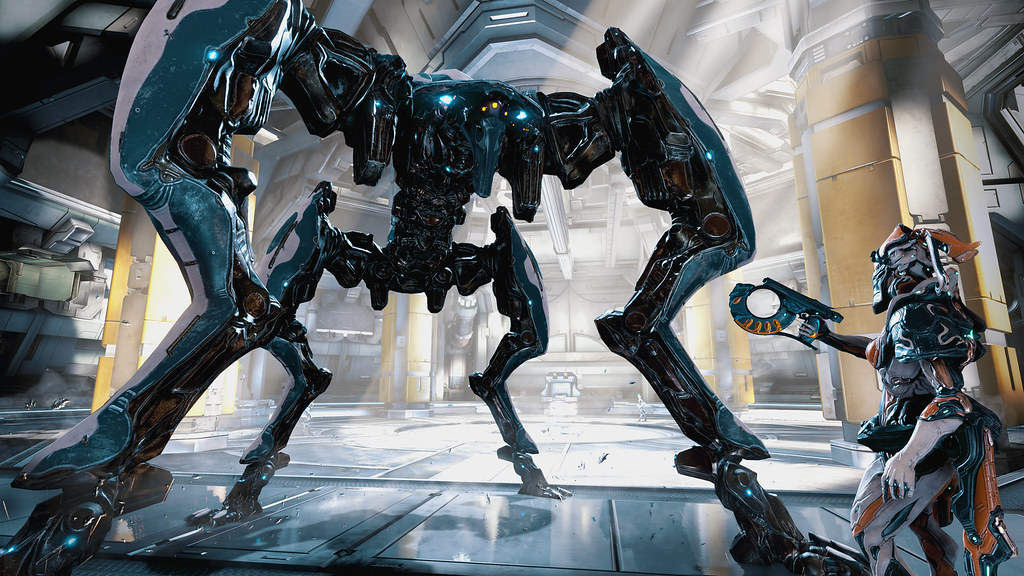 Facing off against the re-created, re-animated Jackal boss won’t be easy this time around

The Corpus Ship set is one of the first tilesets we made, and its story was rooted in what we knew about the universe then. And now we are able to expand the narrative, making the experience more immersive for our players. We are introducing a new Warframe (Protea), a new Corpus character with a deep backstory (including a secret character to be revealed later), we have reworked many of the gameplay mechanics within the Corpus Ship set, refreshed the AI, and reworked the Jackal boss fight. All of that, and we have given the levels a visual facelift that brings them up to the same art standard we have been pushing for the last couple of years.

What are some of the driving gameplay design principles behind this update?

Dave: Ideas for the Corpus set began with an enemy spec refresh, security system changes, and an all-new Jackal fight. Additionally, and fitting with the themes of a Corpus “Greed Cult”, we introduced Granum Crowns — a unique form of currency with very specialized use that is strongly connected to a charismatic and mysterious character to be revealed in the story, and the foundation of Corpus culture.

An early illustration of the Corpus Void Temple

Once collected, Granum Crowns can be deposited at different landmarks in the level to liberate captives, reveal guarded Corpus history, and perhaps most critically, make an offering to the Void to seek the mysteries and rewards within. The Deadlock Protocol Update will introduce players to this new gameplay which will have scaled difficulty options, all new rewards, and our newest warframe: Protea.

What are some of the key visual design principles behind the level design in this update?

Mat: This remaster has been on the books for a while and so our ideas have had time to mature. For the remaster, we stay true to the commercial and capitalist aims of the Corpus, but for the first time tried to connect the visuals to the almost cult-like worship of wealth that the Corpus possess.

During this development we also have been updating and developing both old and new skyboxes [what players see from an internal environment through a window into an external scene], so we have been sure to include lots of opportunities within the construct of the ship to allow for views of space — as well as to allow players to witness the pitched battles in the Railjack space when they are playing those missions. 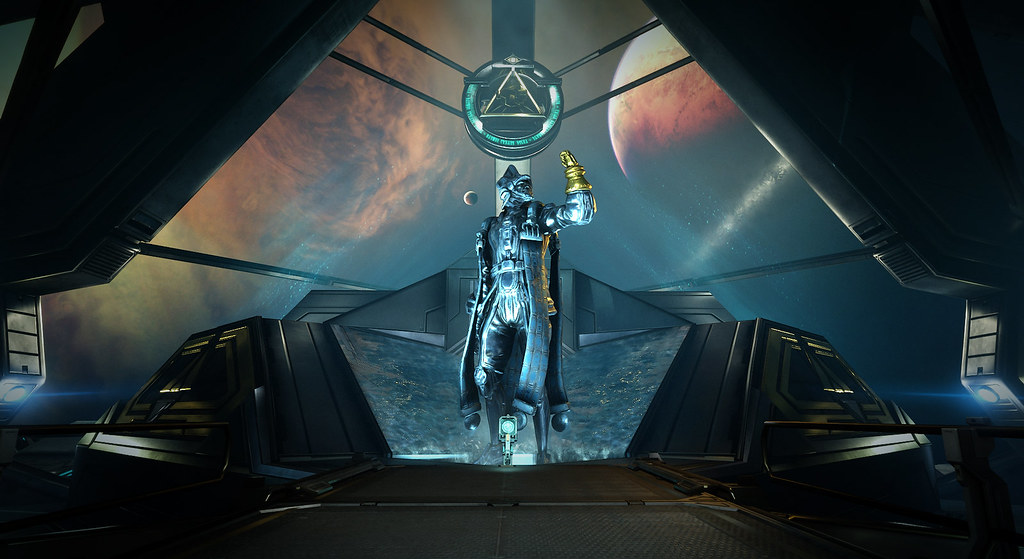 When we developed the Infested Corpus Ship set years ago, we came up with an approach we utilised to hopefully give players a strong sense that they were inside a large ship — and we utilised a similar approach applying the lessons that we have learned since. It is also worth noting that the style of movement and gameplay that the original set was built for is not the same as the movement and gameplay that exists in the game today, so much of the design energy was focused on adapting the old or creating fresh experiences for our players.

What are some of the key elements that make Protea really come alive in this update both visually and functionally?

Mat: Visually, Protea just looks amazing. Keith Thomson and Raymond Dela Cruz, respectively, were the two artists who created the concept and the model. Those two guys worked on the visuals while Pablo Alonso (a Digital Extremes senior designer) handled the design aspects. 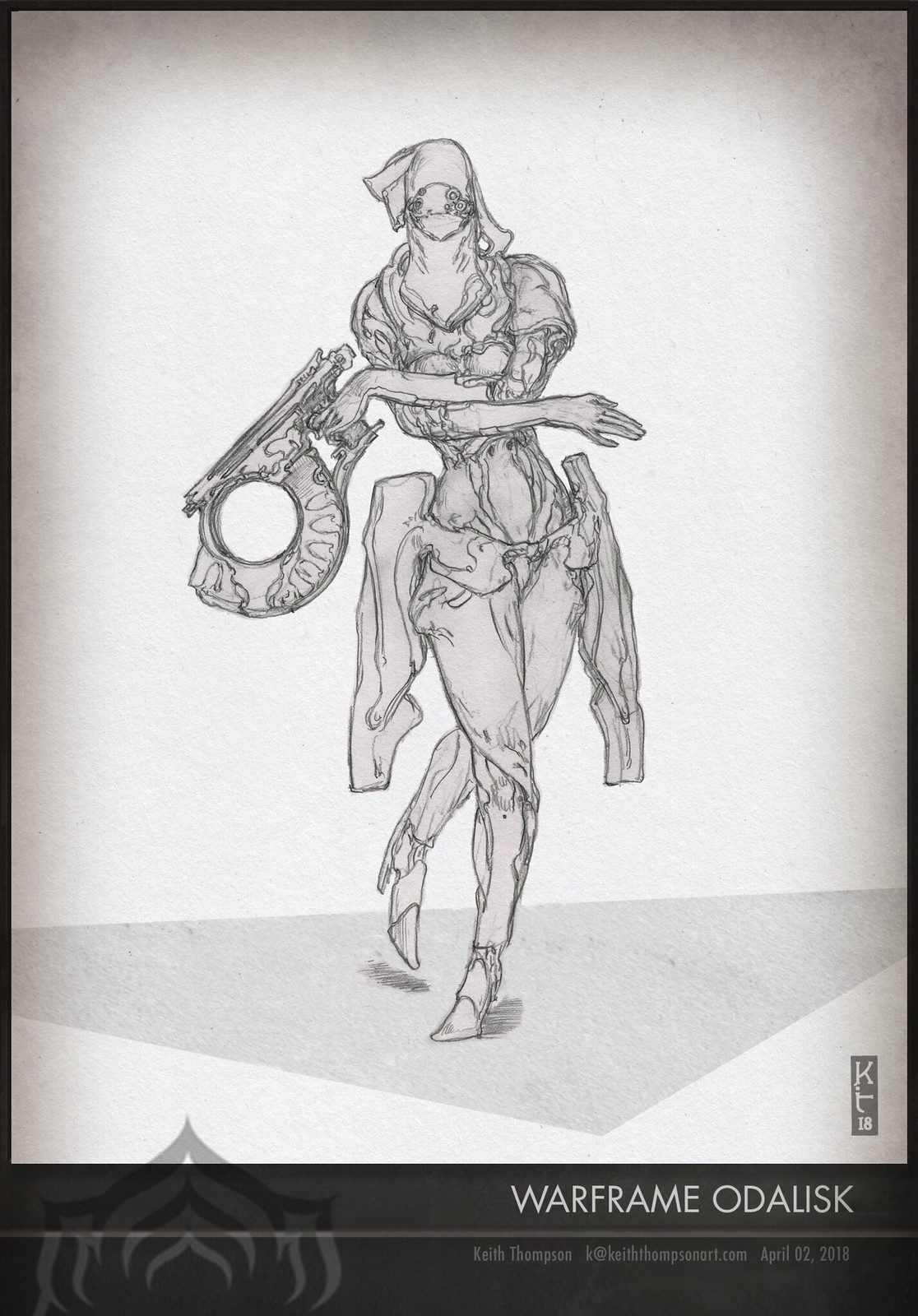 Protea is shipping with some really great kit (i.e. weapons, armor, cosmetics), like the two alt helmets and some pretty unique Abilities, including the power to rewind time! This is interesting because that characteristic also plays into the narrative of the Protea Story Quest that accompanies this release. Players are going to love this frame! I really hope to see some cool Captura images come from our Tenno once Protea ships. 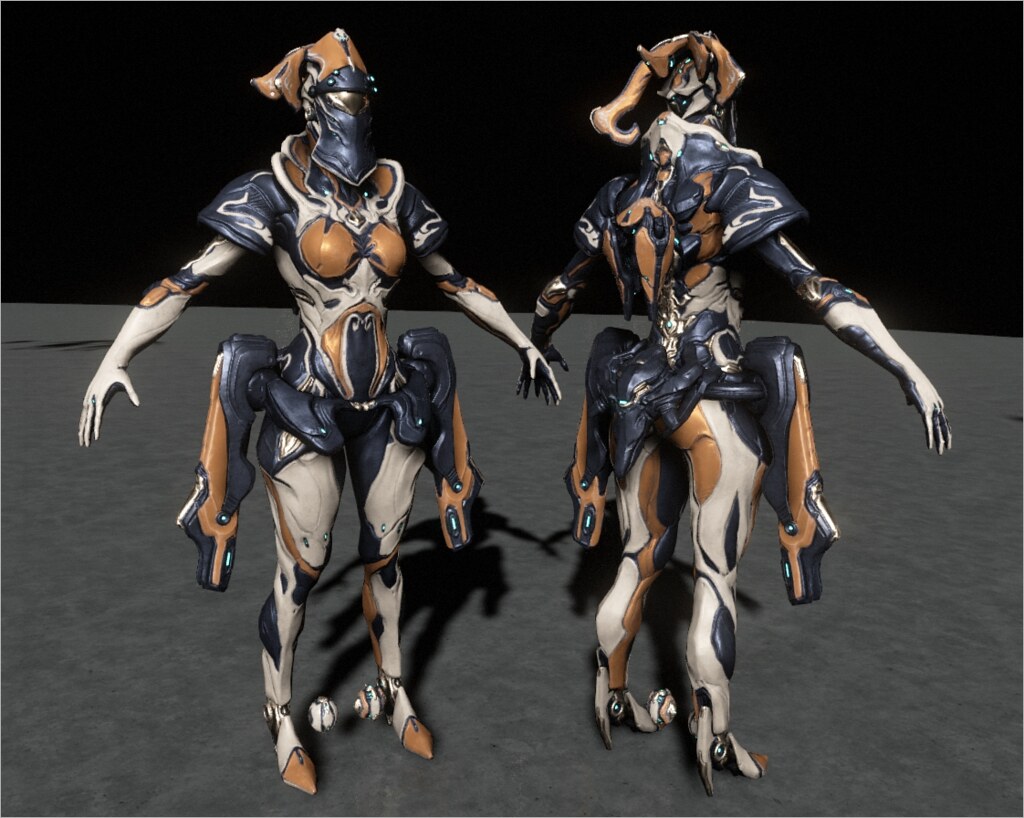 A working polygonal model of Protea

What were some of the particular roadblocks, technical, WFH-related, or otherwise that the dev team overcame to make this update?

Dave: The re-master of the Corpus ship has been in development on and off for a long, long time. Competing priorities emerge, especially during past TennoCon reveals where audience reactions shaped what we made next — open world landscapes vs. procedural mazes, for example. But as the ‘Corpus Ship’ tileset began to show its age, looking more dated each time we released a new set or landscape, the team here felt an increased urgency to replace it.

Excitement for this tileset grew again when we saw how a visual upgrade really lifted the tileset up again. And the added theme pass of shrines and imagery of a Corpus greed cult injected new narrative life into this set. 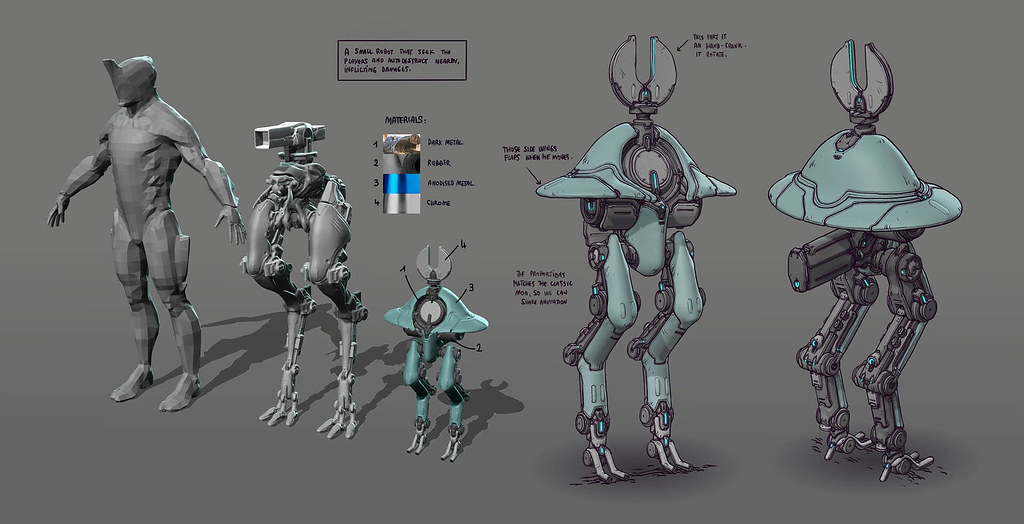 Working size and scale comparisons of Excalibur and various MOAs

The global health crisis and WFH changes are a big challenge for everyone, for work and home life. We had a good head start on The Deadlock Protocol, but there is always a lot of work to bring the complete package to the finish line. Our team is still largely connected and highly dedicated to delivering this update, but we remain mindful and respectful of each individual’s challenges and situations. Encouragement, understanding, and support from our leaders at Digital Extremes have been central to our ability to continue forward making Warframe.

Dave and Mat really just scratched the surface of the deep new Deadlock Protocol update. We don’t want to spoil too much of the new Corpus storyline or reveal too many surprises just yet! Following our typical release schedule, The Deadlock Protocol will ship on PlayStation 4 soon after the PC release. Although PS4 players have to wait for a few weeks, they have the benefit of fixed bugs and added polish, generated from community feedback, to make the PS4 version shine bright! Look for more news next week.

Join us below in the comments section and let us know what you’re looking forward to seeing most in The Deadlock Protocol. Wanna go grab some loot? We’ll see you in Warframe soon, Tenno!