For many of us at Digital Eclipse, the original release of Aladdin on the 16-bit Sega Genesis console back in 1993 was a monumental and unforgettable moment. It was the first time that a game truly resembled an interactive cartoon and was able to redefine what a “licensed game” could be like. It was also a game with a very interesting story behind it, given the close involvement of Disney Feature Animation, so the creation of a collection focused on it certainly always appealed to us.

It would take several years, a lucky discovery, and some good timing for it all to finally come together.

Our team at Digital Eclipse has known members of the original Virgin Games Aladdin development team for quite some time, with one of them (Nick Bruty) actually working at the company, so the notion of doing something with Aladdin was always bouncing around. However, we wanted to make sure that whatever we did was something special. Just throwing the Aladdin game into a box wouldn’t be enough. We needed to do something different, but what?

Diving back into these games to share some new and refreshed content with fans was something we got especially excited about, and luckily publisher Nighthawk Interactive and Disney felt the same way. With their support, work on Disney Classic Games: Aladdin and The Lion King began earlier this year.

As discussions with the original development team progressed, the pieces started coming together. The discovery of a wealth of content that never made it into the released version of the game was a major eye-opener. There was so much unseen content that the idea of an Aladdin collection really started making sense.

The Lion King was another 16-bit Disney favorite published by Virgin Games soon after the original Aladdin, and it seemed like the perfect time to bring these two games together into one collection.

A lot of thought goes into what games are included in every project we work on, and it’s important that the games connect to each other in key ways and are able to present an interesting story. For this collection, we brought together two classic Disney games connected by the team at Virgin in the heydays of the Genesis and SNES. 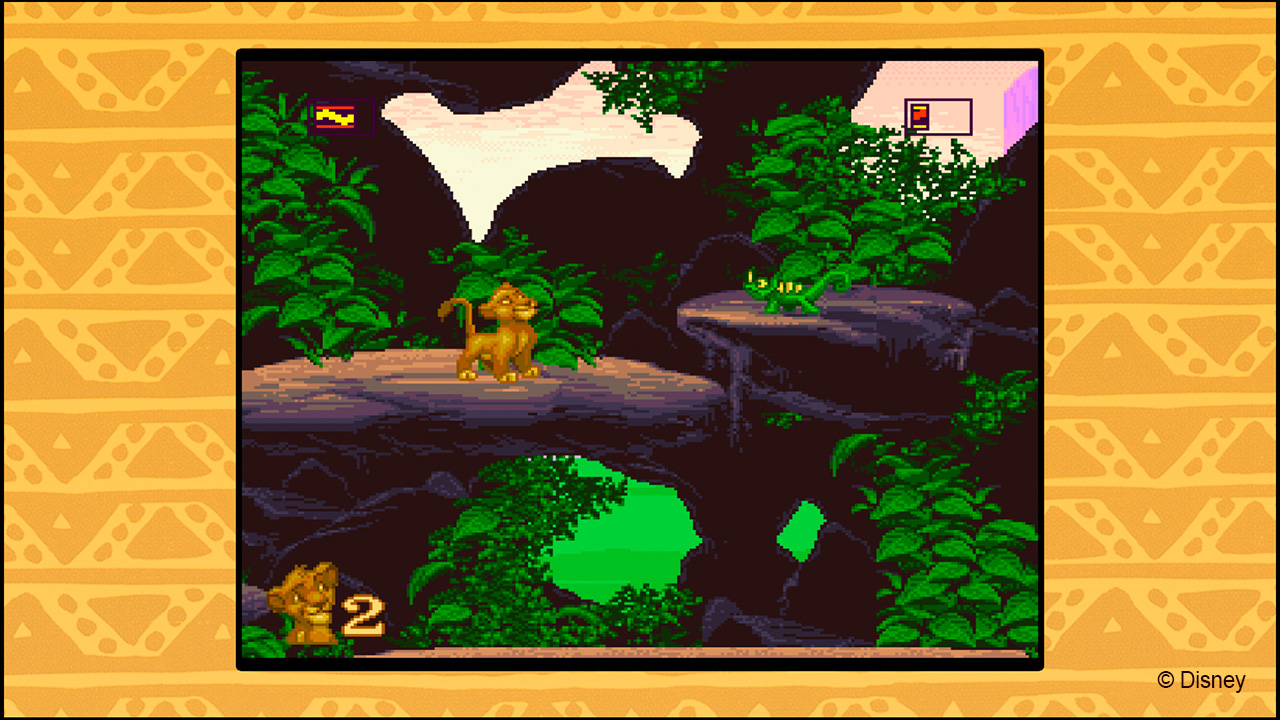 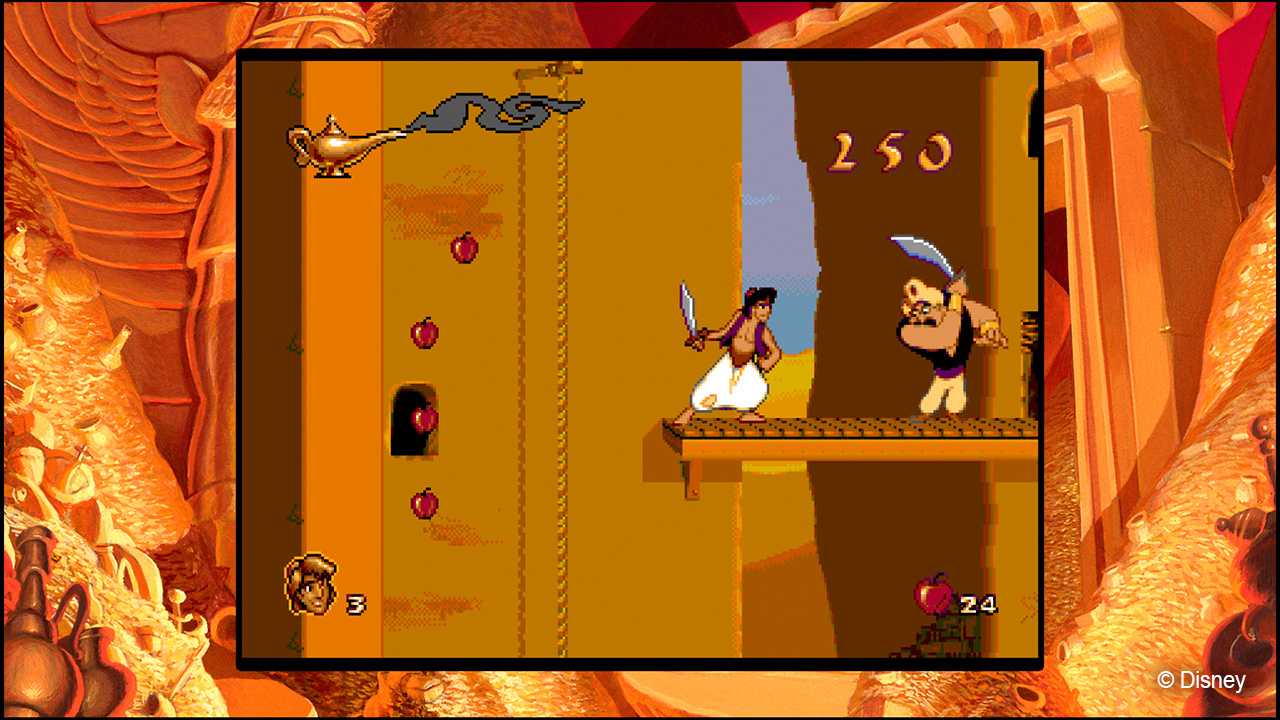 But we went beyond the Genesis and SNES, working hard to include multiple playable versions of the various platform releases fans have enjoyed over the years:

It was also important to us to include a variety of options to improve the experience of playing these games in the modern age of consoles. That meant adding “rewind” to all the games so that players could easily backtrack and overcome mistakes, providing easy access to level skips and invulnerability, and even including the Interactive Game Viewer featuring entire (and fully watchable) playthroughs of the games so that players can jump in and start playing at whatever spot they want. 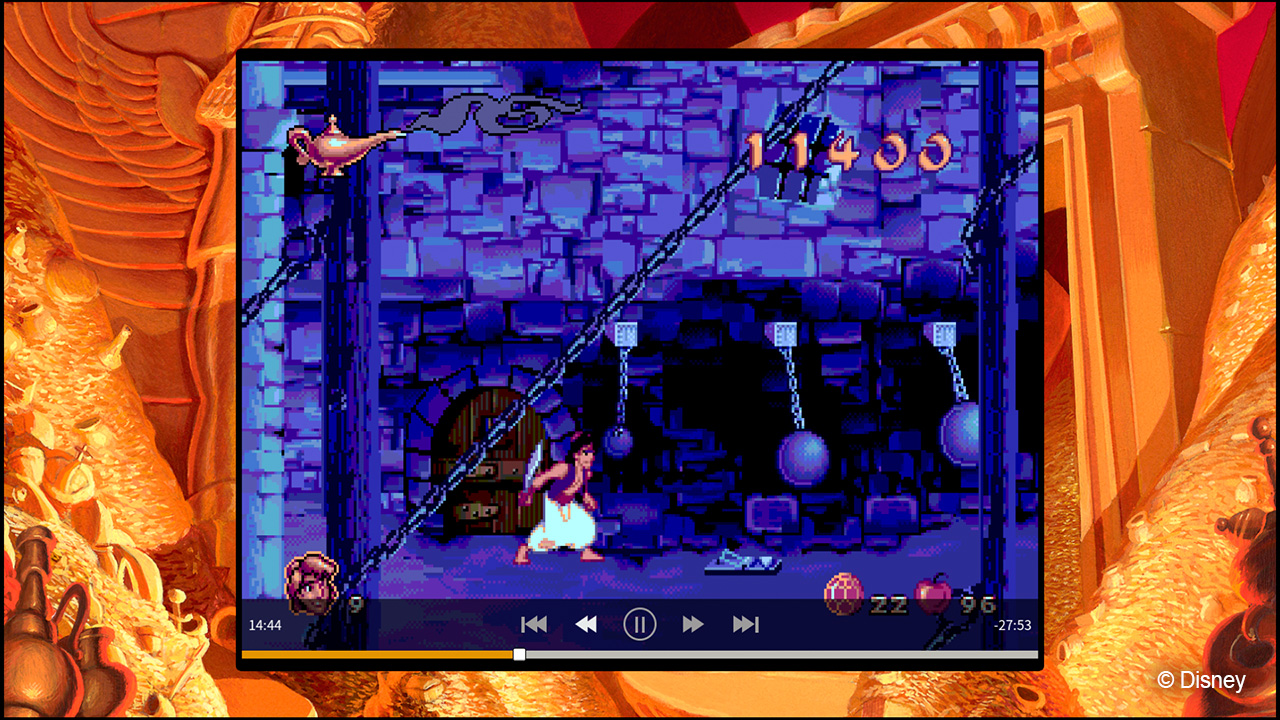 We want every person who buys this collection to be able to finish every game, so it’s important for us to provide the tools for them to do that and empower them to enjoy the experience any way they want to.

We also feel that players should be able to adjust the overall presentation of each game to suit their tastes, so including a variety of screen options was a must. From each game’s options screen, players can switch between a screen size that best reflects the native aspect ratio of the original game or make it bigger or even fill the entire screen, if they want. They can also choose from three different filters designed to mimic the look of traditional CRT televisions and monitors, as well as turn on screen borders. 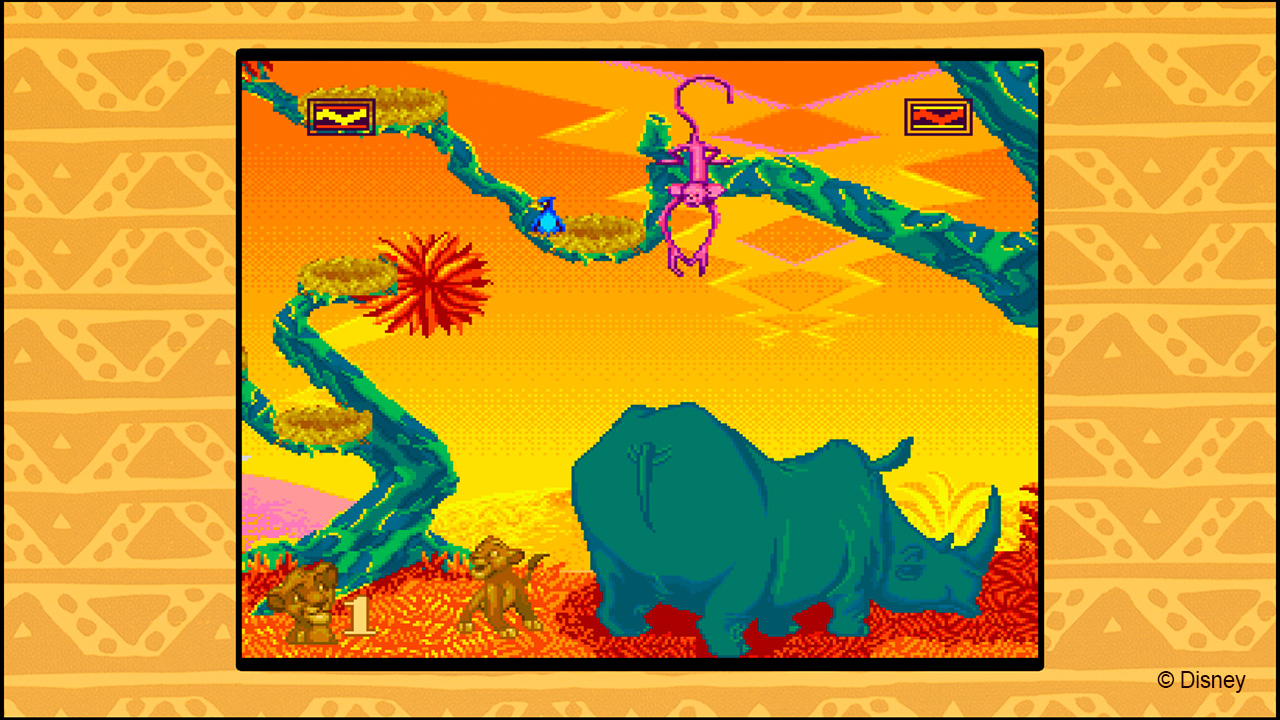 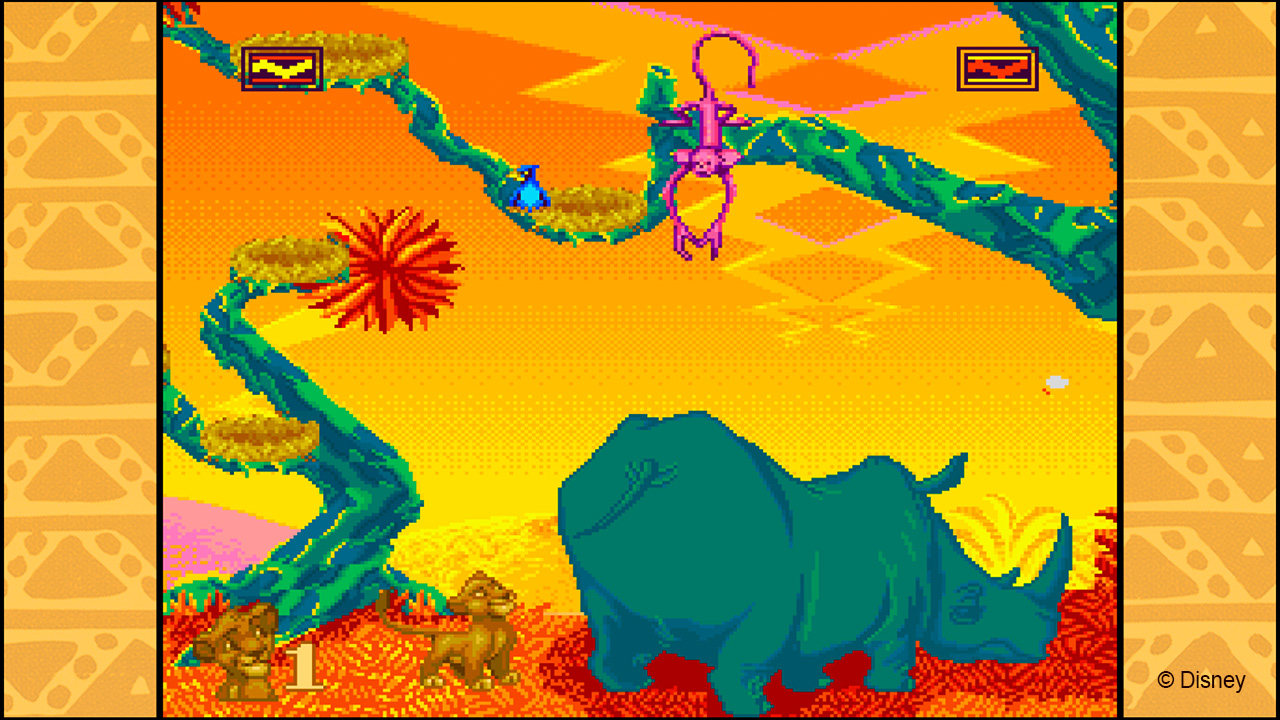 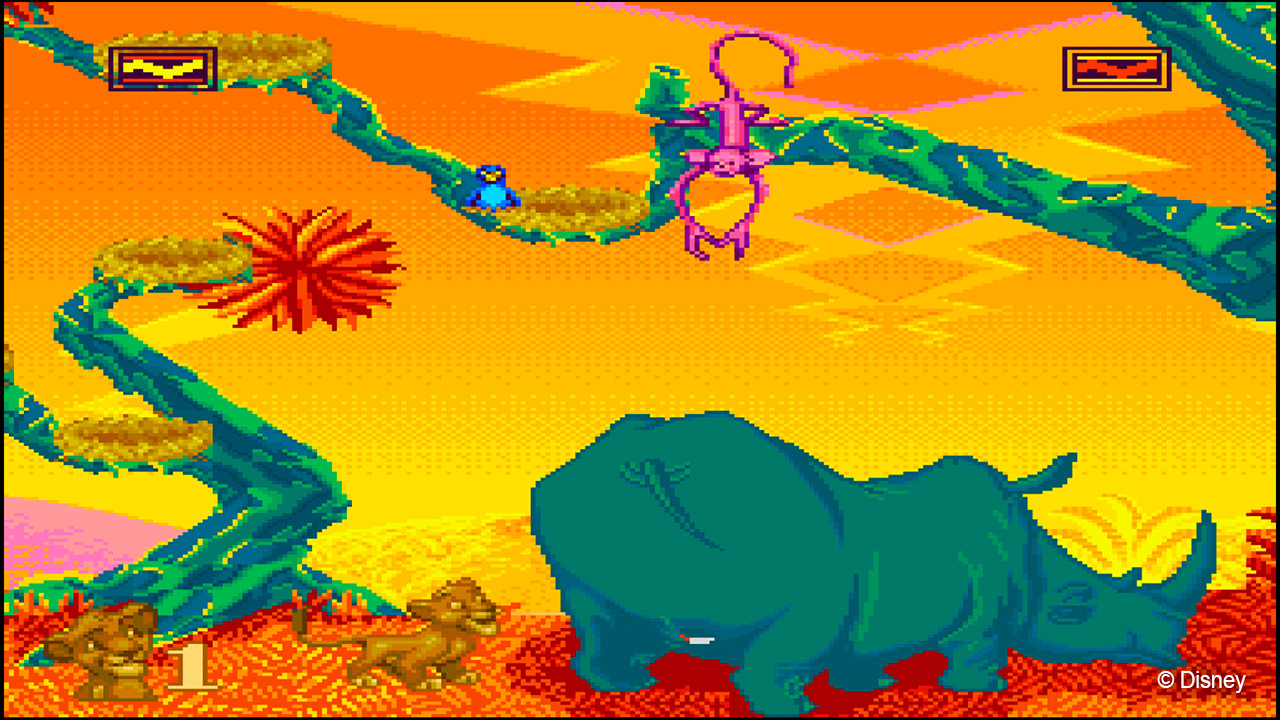 With such rich history behind both of these titles, the museum section in Disney Classic Games: Aladdin and The Lion King packs in a lot of content and previously unseen bonus material.

In fact, what we learned while filming the behind-the-scenes Aladdin videos for this collection inspired us to create an additional, bonus version: the Aladdin “Final Cut.” While based upon the original version of the game, this updated version features a large number of fixes, tweaks, and additions; so many, in fact, that listing them out would probably take around seven pages.

The original development team explained the things they would have loved to have fixed or improved if time had allowed. While they had to make key decisions on what to focus on for their initial release, that got the Digital Eclipse team thinking about how we now had the chance to explore all those refinements. 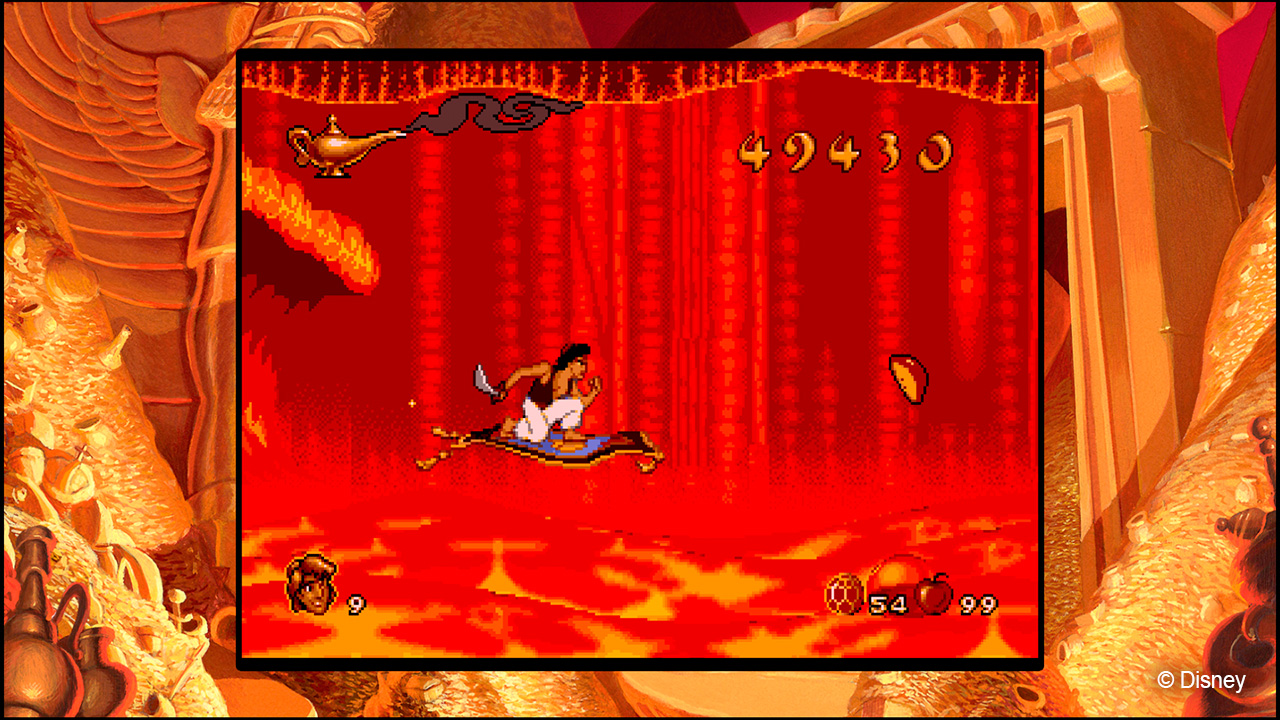 We didn’t want to make any changes just for the sake of making changes, though, so we spent a lot of time figuring out what were things that a) would genuinely make the experience more enjoyable for fans and b) the team would have probably done themselves if they had some extra time.

Being fans ourselves, a) was easy to figure out. It was b) that was a bit harder, so we ended up enlisting the aid of some of the original team members, such as William Anderson, to help out with suggestions. William was one of the level designers on Aladdin and a great sounding board for our ideas and suggestions. Combined with Rich Whitehouse’s expansive knowledge of the game, we had the tools needed to make the changes we felt appropriate.

It was important to all of us, though, that we didn’t make a version of Aladdin that felt too different from the original. Why mess with something so great, right? Instead, we wanted to create something closer to a “Day 1 patch” for the game, which is something the original team never had the opportunity to make.

Along those lines, we addressed key items such as the camera system, which had some problems around centering the character and dead zones; the combat system, which benefited from some adjustments to attack animations, how sword clashes are handled; and overall enemy balance.

We then went in and fixed a variety of smaller issues, such as collision bugs that were making it harder for players to reach certain items. We even added in new level sections and items to promote a bit more exploration and sense of discovery.

In the end, I feel that we struck a nice balance of preserving what made the original version of Aladdin so great and timeless, while also making some changes that will hopefully make the experience a bit more balanced and enjoyable for fans of the game. We hope they agree.

With all the new and never-before-seen content in this collection, only some of which I mentioned, we can’t wait until Disney Classic Games: Aladdin and The Lion King gets into the hands of the fans tomorrow. The journey to get to this point was sometimes challenging, but we always knew it would be worth it.

We hope that this collection captures what made both the original Aladdin and The Lion King games so magical and is able to introduce a whole new generation of Disney fans to some classic experiences that are still just as good today as they were decades ago.