Hello everyone! I’m Victor from Labrodex Studios. We’re very excited to see Scraper: First Strike make its way to PlayStation VR on July 2 to be among the many incredible games with compelling narratives, immersive worlds, and creative gameplay experiences at PlayStation Store. I’m here to talk about the ways Scraper executes on more traditional RPG Shooter paradigms while remaining faithful to the VR medium!

Drawing inspiration from games like Elite Dangerous and Star Wars Galaxies, it became a studio goal to provide players with personalized progression for the right effort. In Scraper: First Strike, players drive their Modified Hover Pod (MHP) to combat the Humechs, artificial intelligent insurgents. Their MHP can be upgraded part by part to enhance different aspects of its functionality: its thrusters improve the player’s mobility, its shields improve their defensive and regenerative capabilities, and its core improves the MHP’s usage of special abilities. 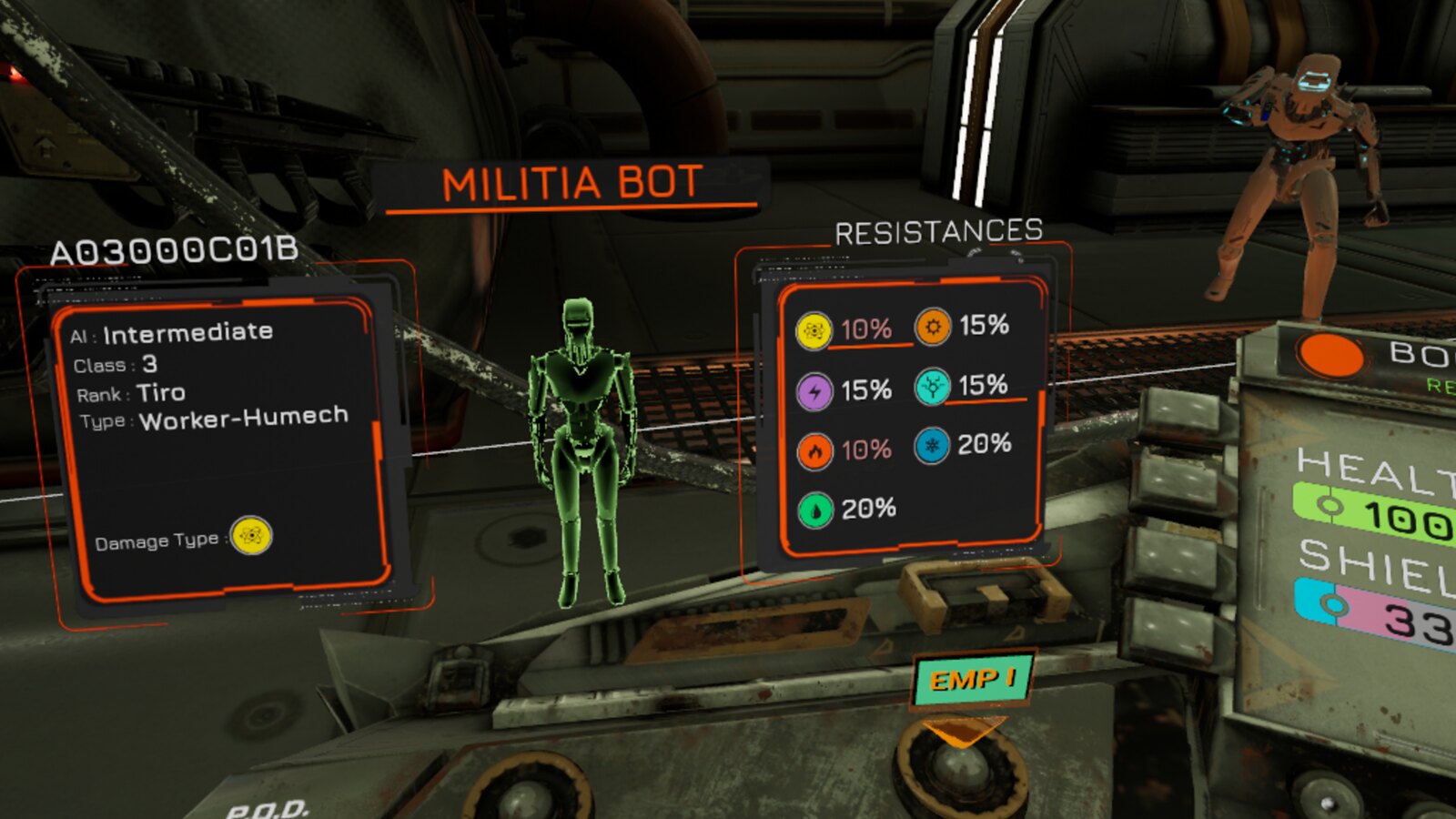 To do this, players must first find engineering schematics for these parts by locating terminals and then scanning for them in the Humech Resistance Force (HRF) network. Afterwards, players can scavenge for ingredients from fallen Humechs or buy them from the HRF Vendor to take over to an Engineering station and build their new MHP equipment. Players can invest the time in fully decking out their MHP to handily obliterate their enemies. Alternatively, they can stick with an econ budget MHP for a bigger challenge.

Another way players can tailor their MHP’s capabilities are through modifications. Each equipment has mod slots players can put in modifications for to further augment that part’s capabilities. The number of mod-slots a piece of equipment has is determined once it is built through the engineering system. This means if the player has built two miniguns, their left minigun can have enhanced attack speed while their right can be modified with a larger ammo capacity.

Each enemy type in Scraper: First Strike offers a set of unique abilities along with different elemental resistances. We want players to appropriately arm themselves for certain combat situations while not breaking immersion with excessive menu navigations mid-fight. To accomplish this, we’ve provided players with a weapon wheel that can be quickly opened and closed to swap between different offensive options. The best part is it slows down time. This allows player the mental bandwidth to consult information from their dashboard such as enemy resistance charts, ability cooldowns, and ammunition while not being removed from the moment.

On the subtler side of player customization, we’ve provided support for the DualShock controller, PlayStation VR Aim controller, and the new 3d Rudder motion controller. Our team is eager to see what combinations of weapons, modifications, abilities, and strategies you’ll pull from the engineering toolbox as you help the HRF defend the megacity of New Austin from Cifer and his Humech arm.

Draw A Stickman: EPIC 1 & 2 Collector’s Pack Is Now Available For Xbox One