Hello everyone! My name is Masayuki Onoue. I am the Game Director of Giga Wrecker Alt. at Game Freak Inc. in Japan. It’s a real pleasure and privilege to talk about our game on PS Blog.

Giga Wrecker started life through what we at Game Freak call the “Gear Project” — an internal competition or intrapreneurship. The Gear Project was set up with the intention to seek out and create new IPs by inviting staff to submit original projects. Those projects that passed the screening process could start a new life as an official project for the company.

We are grateful that there is so much interest on the Gear Project even outside of the company, and actually, thanks to this interest, there are many new graduates that apply for a job at the company for this very reason. Because the Gear Project is such a challenging system, I think the bold idea of attempting to fuse a physics engine and an action game was perhaps the reason that Giga Wrecker stood out in the eyes of the judges. 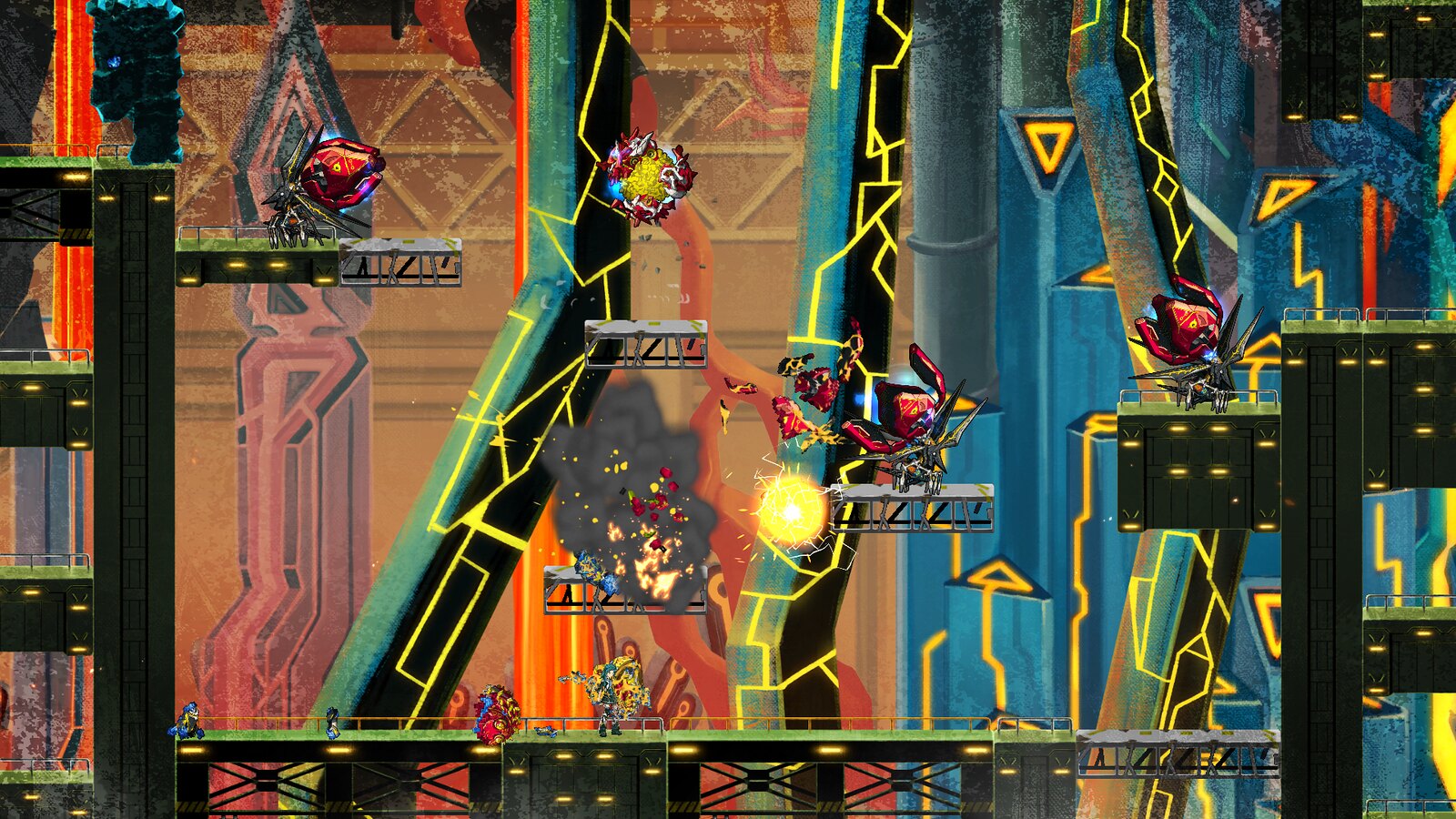 Even before development started, I thought that I was mentally prepared, but as soon as we started, we really struggled with the absurdity that came from the unpredictable nature of the physics engine. To be brutally honest, physics is a bad match with action games that require delicate controls. So rather than trying to bend the will of the physics engine to make a solid yet rigid action game, we took the direction to embrace those quirks instead as it felt more natural to lean towards the whimsical nature of the physics.

As developers, had we taken the approach of being too obsessed or obstinate about the ‘intended behavior or strategy as designed,’ that would have surely killed the free and intuitive fun that the physics engine could offer and totally defeated the original purpose of the game. 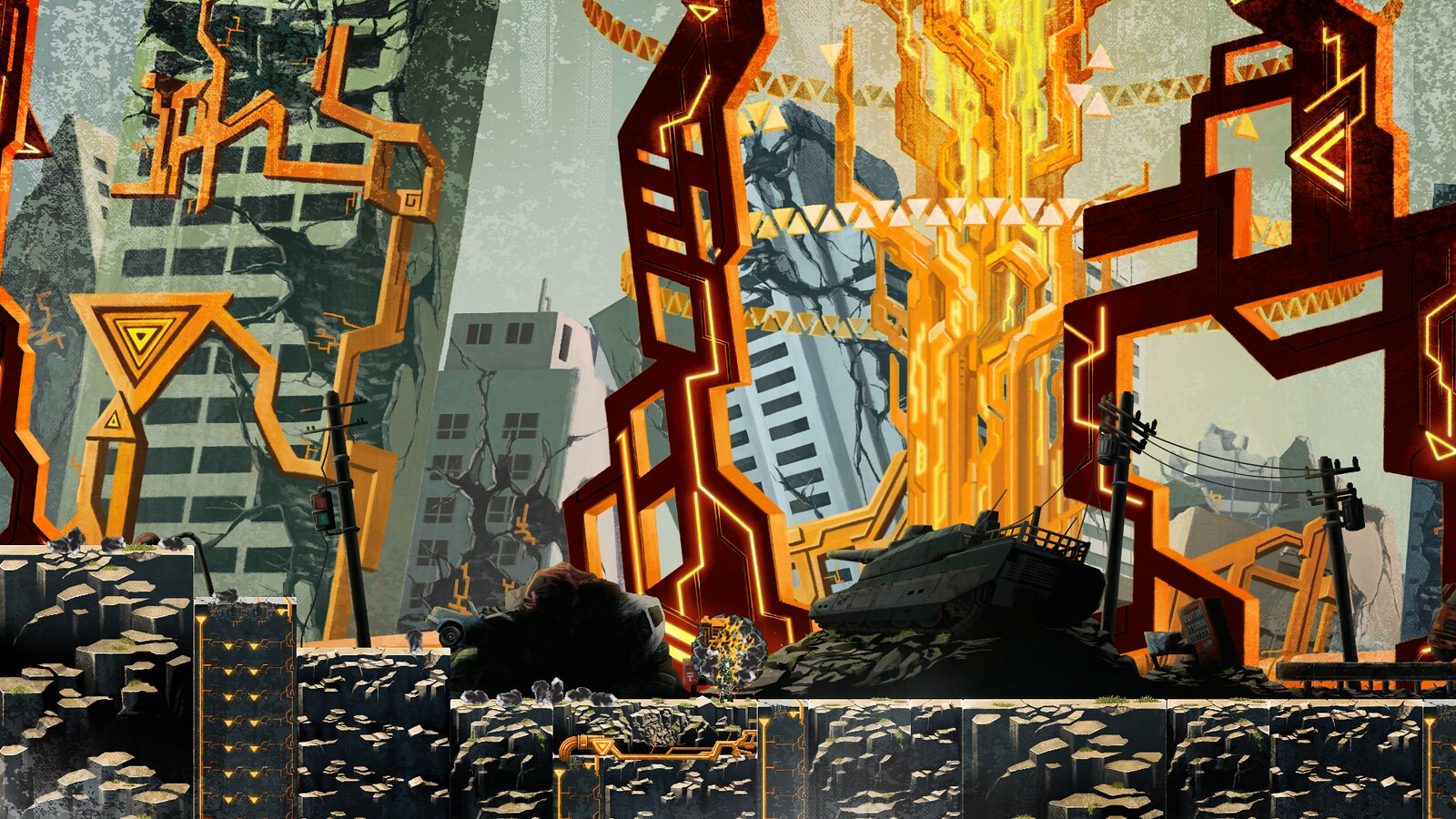 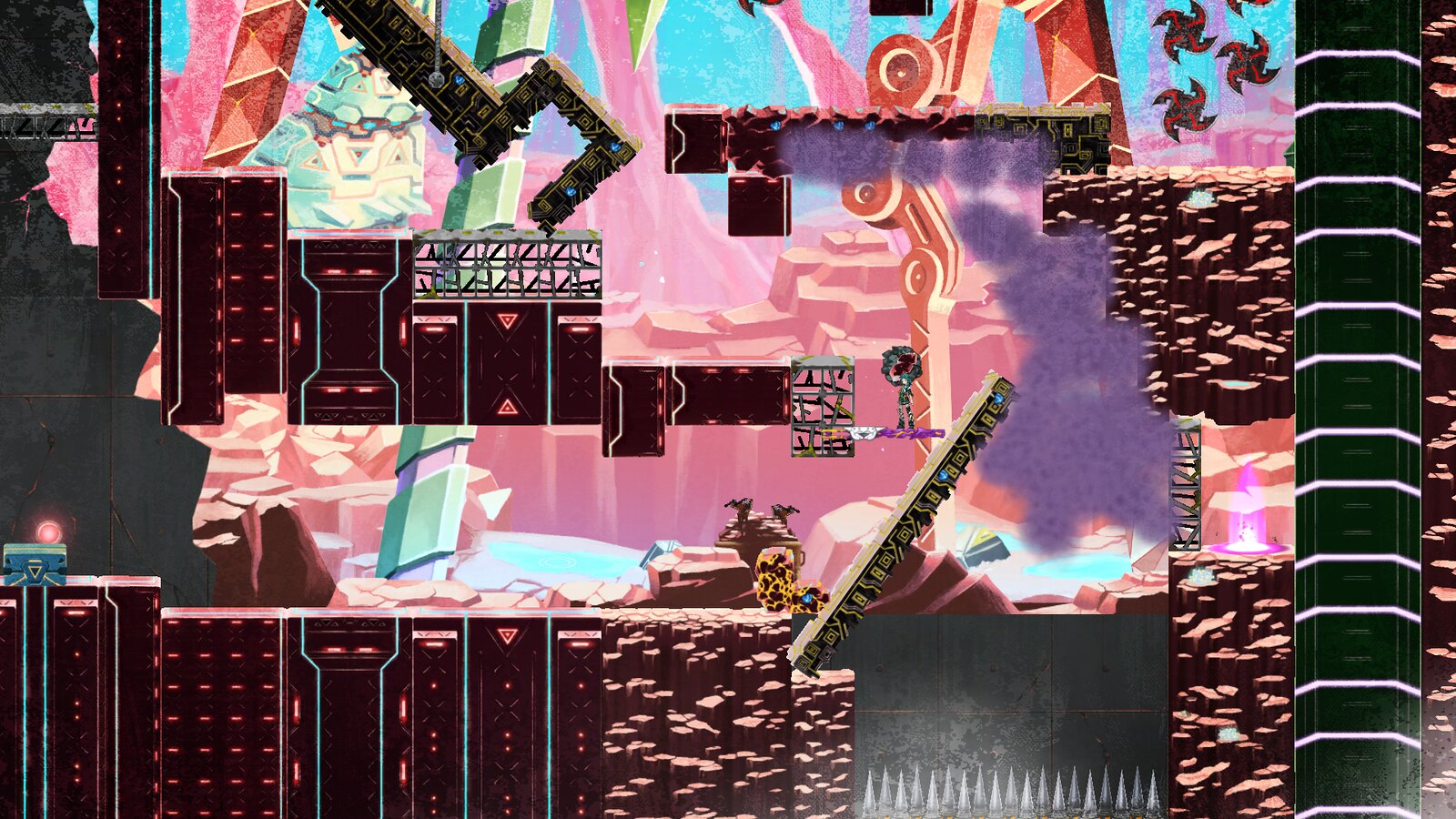 We did, however, subtly change the direction in some areas. For example, with the boss battles, the physics simulation is simplified, and the action aspects are prioritized instead. Our intention here was to intermingle the different elements: a puzzle mechanic that requires thinking and solving through trial and error, an action-based mechanic like dealing with “collapsing footholds,” and a boss fight that requires action game skill to defeat.

We always knew that a fully integrated physics engine wouldn’t offer precise actions, but limiting the game to only puzzles would not offer a gaming experience with any tension for the player either… With that in mind, I think we were able to develop these two seemingly opposing elements and combine them into something that really complemented each other instead. 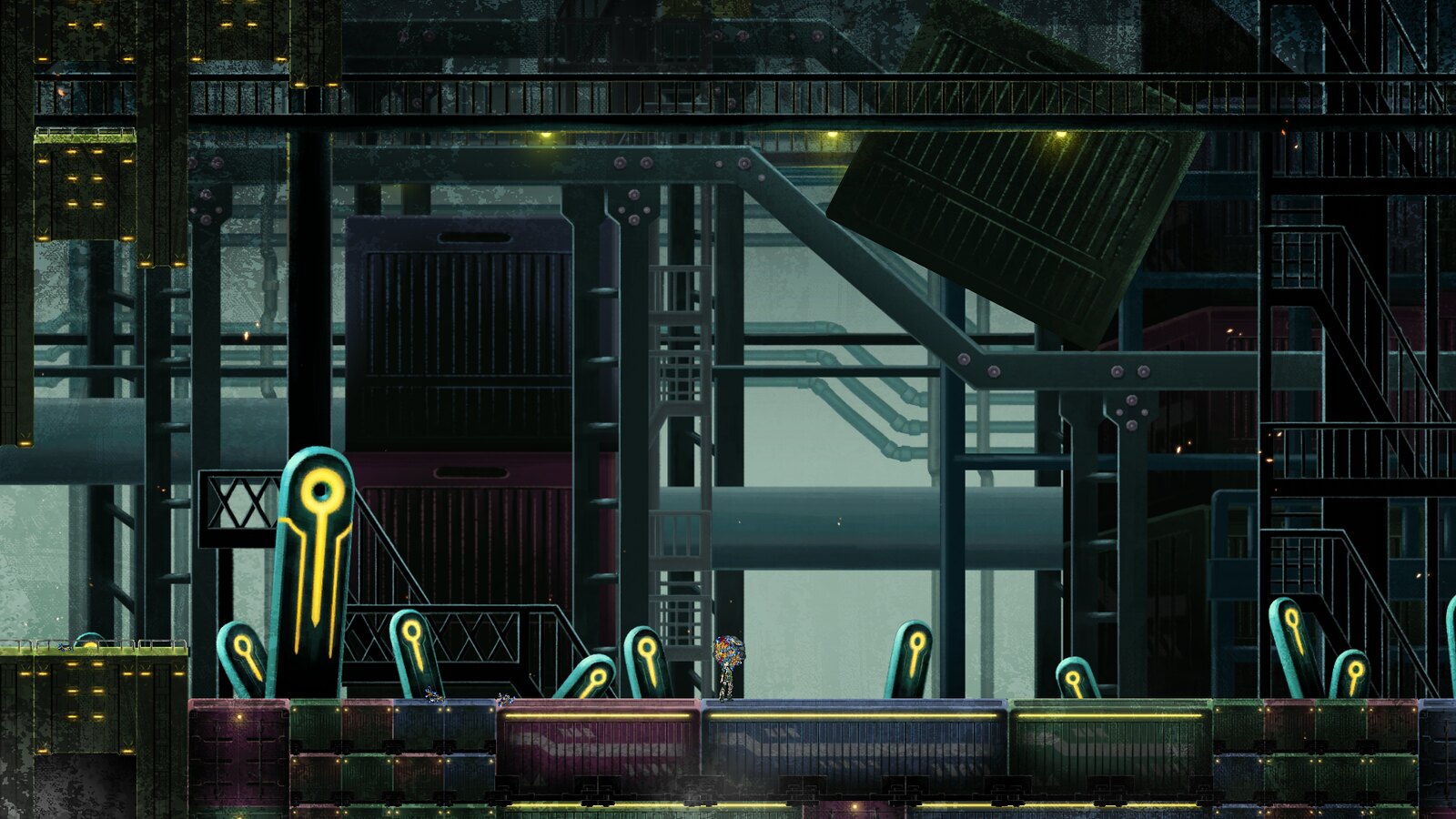 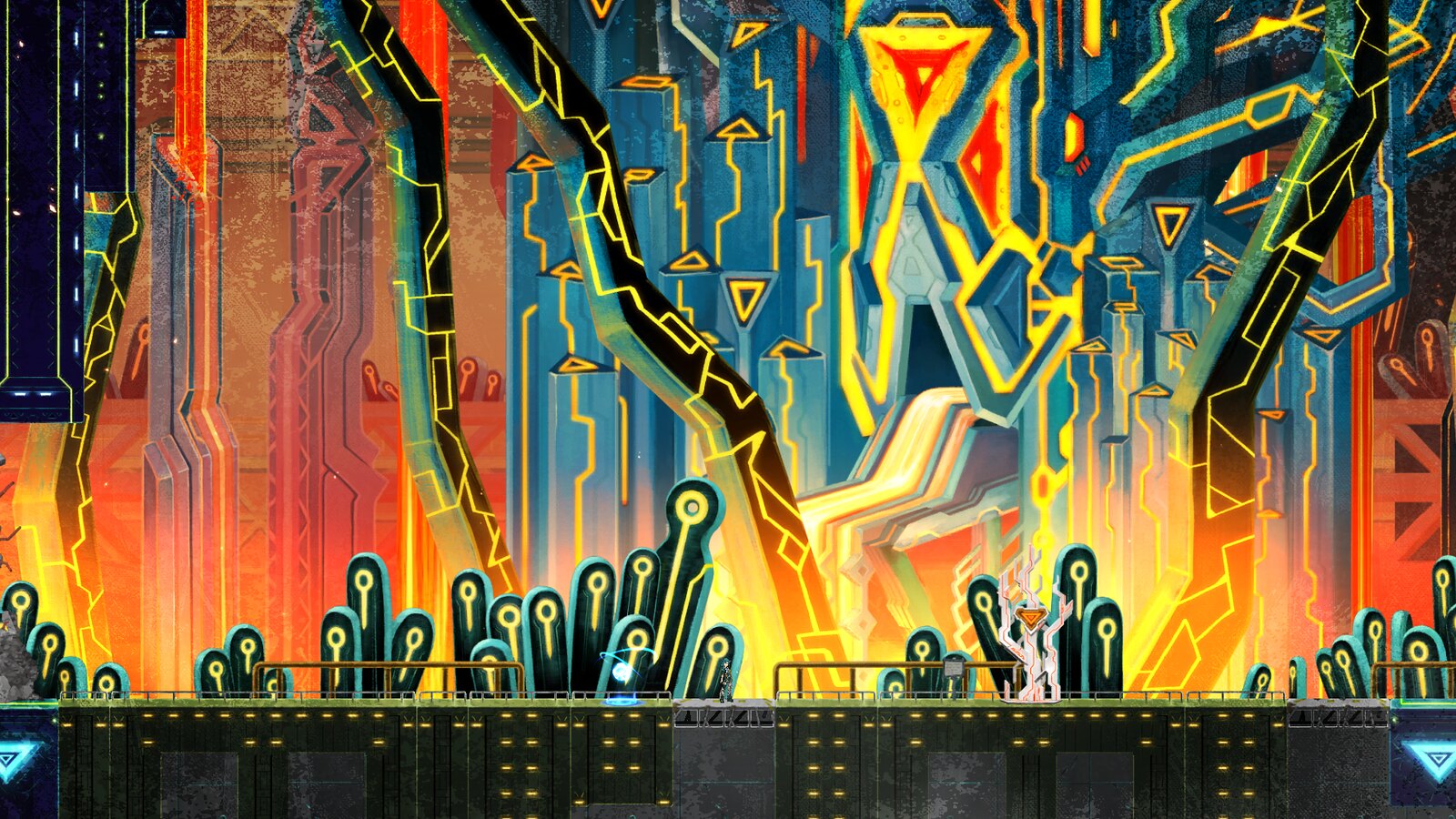 “Giga Wrecker Alt.” started as a project with the intention to fuse the fun of a physics simulation and the game play of the Metroidvania genre.

There are many games out there that uses a physics engine, but I had the impression that most of these games tended to specialize in either puzzles or limit the use of physics to just effects. When Giga Wrecker was still in the early design document stage back in 2013, (the official project started in 2015 so there is a bit of a gap) at least I didn’t think there were many games that fully utilized a physics engine in the style of a Metroidvania game.

As such, I thought this would certainly be something worth pushing for, and if all went well, I also felt the potential that the game could end up being really quite unique. In the future, either through the Gear Project or otherwise, I hope I can continue to strive to offer pleasure and entertainment with more challenging ideas!