Hello, dear PlayStation.Blog readers! Undead Horde releases today on PlayStation 4! The game is a “necromancer simulator” combining elements from action-RPG, strategy, hack ’n slash and minion games. I’d like to share some background details from our development process, to try to answer the question: “What is Undead Horde?”

In late 2017 we were furiously trying to come up with a new game project at 10tons. We had done several top-down shooters in a row including Neon Chrome, Jydge, Time Recoil and at that time we had nearly finished Tesla vs Lovecraft. Though we love top-down shooters, we really wanted to do something different for a change. At that point, games with larger armies fighting each other in some form were somewhat fresh, so we started to dig around there.

We started to do some prototyping. First we created a kind of “massive fantasy battle simulator,” but in the end the prototype wasn’t that popular in our internal testing even though the team seemed to like it. 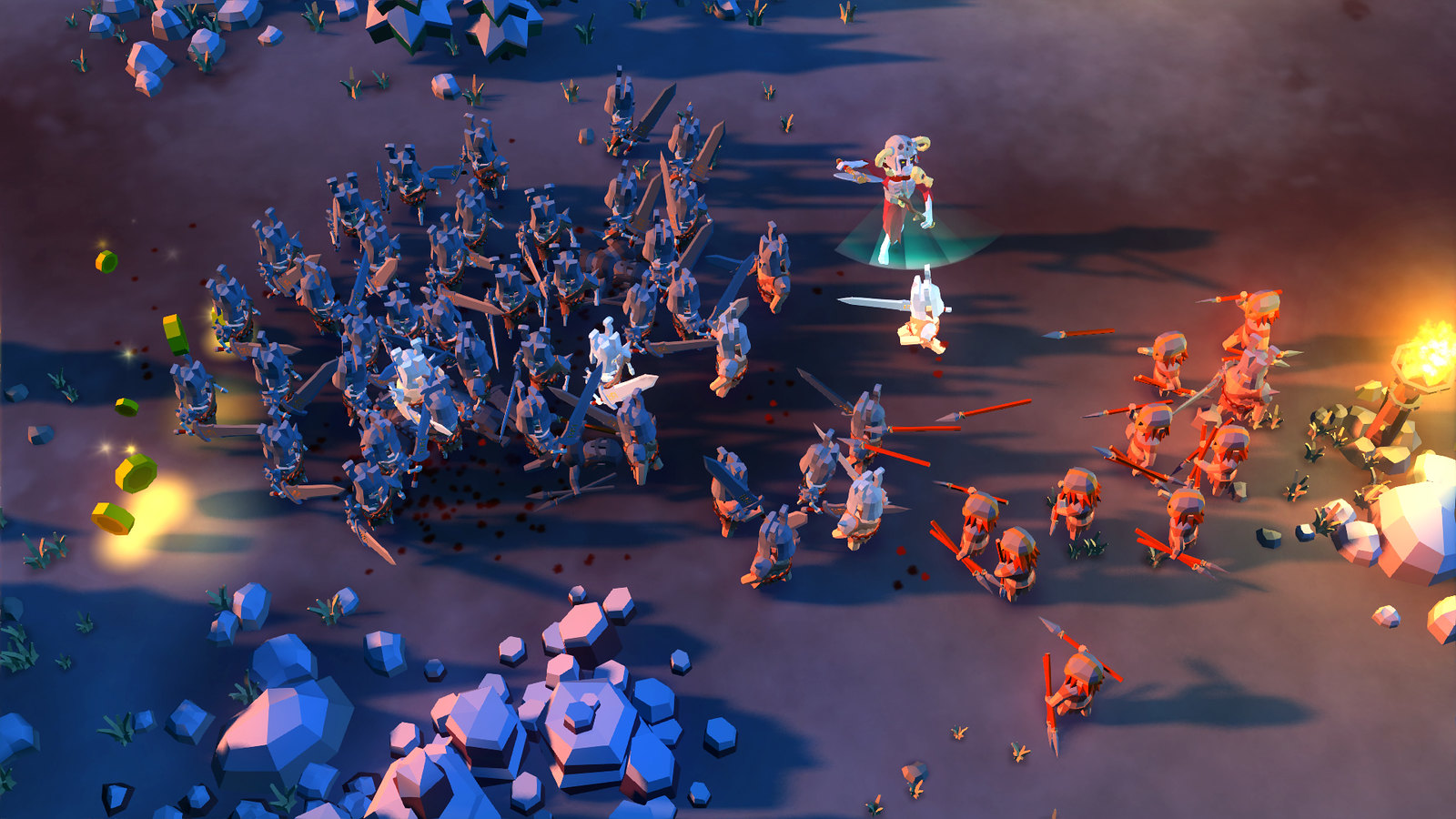 A battle between amazons and undead barbarians

We continued on and remembered a fun and somewhat popular little game called Right Click to Necromance (RCTN). It still felt fun so we took on a new task: Can we make a game where you raise the dead like in RCTN, but so that the game would have a story and a campaign lasting several hours? This was the basic question behind Undead Horde. We also felt that the whole theme of necromancy hasn’t been thoroughly explored yet with games. A game called Nekro was canceled and a lot of other minion games didn’t have actual necromancers.

So this is what Undead Horde became: A game where you command undead minions which you can raise directly from the battlefield. You can also raise undead from summoning statues & graves also, but the main source is usually your slain enemies. You can find a very early development shot from this phase and compare it to the final shot above — a lot changed along the way visually too. 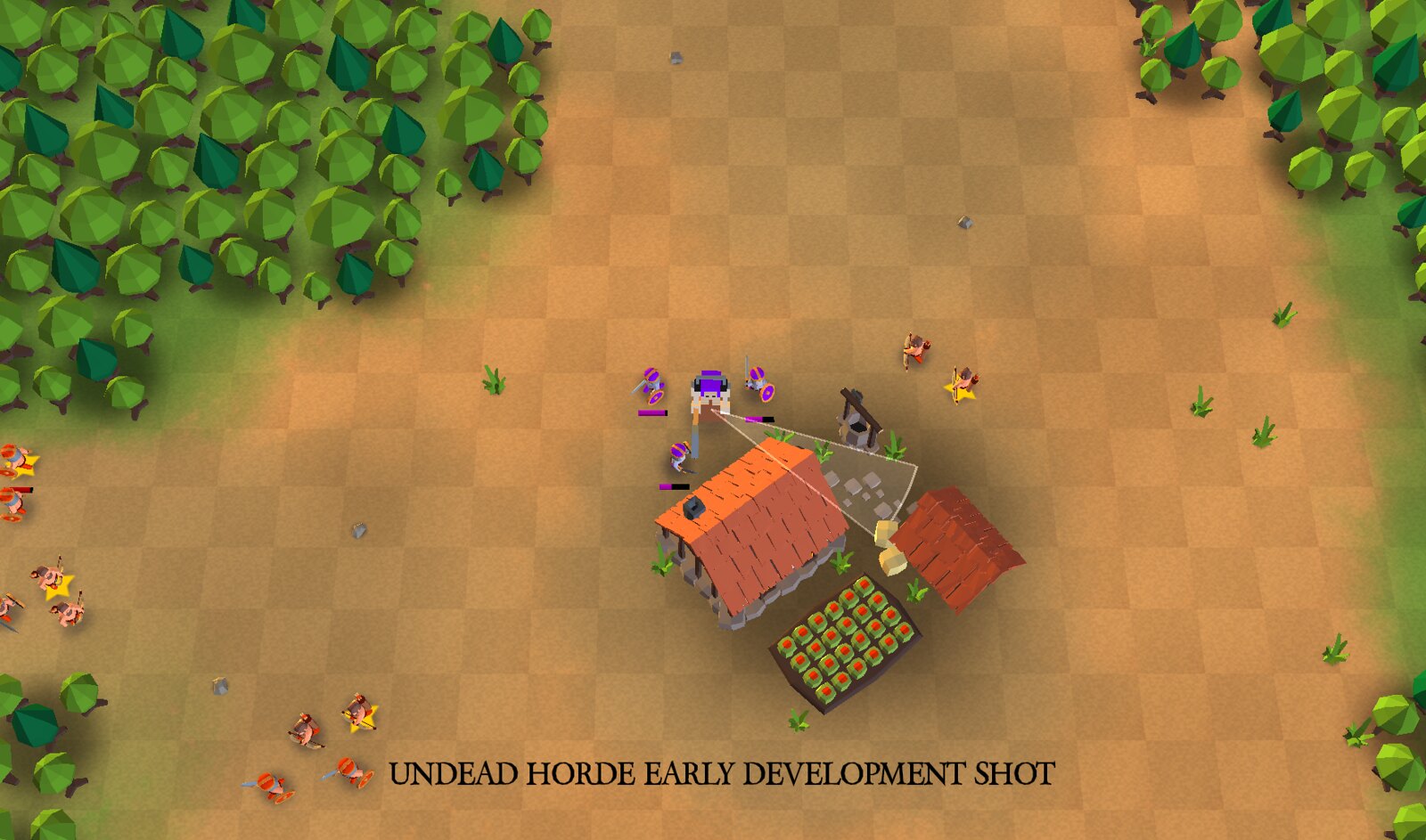 Unlike in RCTN, the player controls a necromancer instead of the horde. This was done since we wanted to have a main character to focus on. The undead minions are mostly axe fodder, so the actual progression happens through your necromancer with items and leveling. There are some heroes and stronger units though, which the player can try to keep alive if he wants to try “quality over quantity” tactics. The player can do a lot of conventional ARPG stuff as well: fight, cast spells, loot, complete quests and explore the world.

We think Undead Horde brings something new to the ARPG table — there’s no combination of necromancy, action RPG, and minion control like it. The new elements also provided us with some challenges, as many gameplay problems had no off-the-shelf solution, and we realize that the gameplay style isn’t necessarily for everyone.

The story in Undead Horde is quite simple — you’re Orcen, the last necromancer. Your goal is to take back the Overworld where the undead once ruled. A paladin named Benevictor is your arch enemy and the leader of the living; the demise of the undead was of his making.

The game takes Orcen through forests, deserts, catacombs, and wastelands of ice & fire with the ultimate goal of reaching the Citadel where Benevictor has retreated. After the first playthrough, the game can be replayed with the full selection of minions from the start and with mutated world parameters.

I hope this post offered an interesting first impression about the game. Watch the trailer to learn a bit more about the game and its story. Pick it up today to do some undead re-animation yourself!