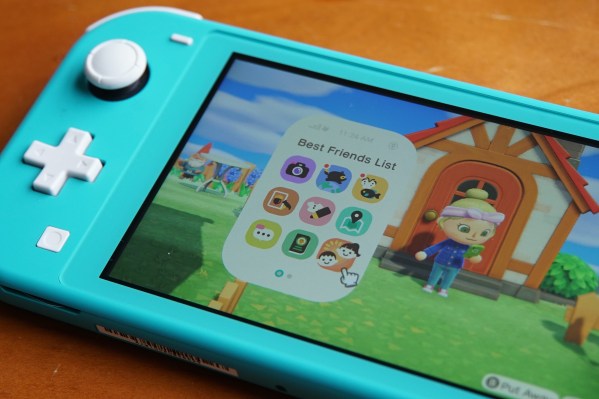 During these long, mundane physically-distant days, stretching on into an uncertain future like an ever-lengthening beigeish corridor, it’s impossible not to miss hanging out with friends. Especially the kind of hanging out where you’re not really doing anything in particular, not talking about any one thing—just kind of being.

As we continue to stay physically distant from one another, it can be hard to feel socially present with the tools we have. Even with Zoom and other more casual chat apps, video chat can feel sort of flat. (And for those of us lucky enough to be working from home, visiting friends after work with the same tools we use to do work stuff doesn’t always feel great.) More often than not, we sit, stationary at our designated video-chat-spot, trade reports from self-quarantine and maybe drag in a cat or a kid or two.

But even untethered from our desks with more playful video chat apps or innovations like Facebook’s Portal and its roving eye, there’s still something else that doesn’t get conveyed. With flat screens, we have little sense of our physical selves in relation to one another. Socializing spatially, as it turns out, is something we probably took for granted. But the gaming world has understood this for years.

Now more than ever, we need creative ways to feel present with other people. The whole crisis looks like a huge opportunity for the gaming industry, but also one for more transcendent digital social experiences that don’t just look like playing a few rounds of Call of Duty after work. Hopefully, these experiences could be so imaginative that we don’t even know what they could look like yet.

If VR had delivered on its early promise, we’d all probably be living in it right now. The idea of having some kind of shared virtual realm is still a potent one, but the additional hardware has proven too prohibitive to get the average person on board (for now, at least) and even the coolest VR experiences remain niche. Still, it’s clear that we want to come together, not just in Instagram DMs and email threads, but as avatars navigating shared spaces. Somehow.

Virtual worlds getting it right

If the mainstream crossover success of Animal Crossing is any indication, people have a huge appetite for virtual spaces right now. Even with Nintendo’s truly painful online multiplayer experience, there’s something fun and special about visiting a friend, bopping each other with nets and showing them your new digs.

In Animal Crossing, this is truly a more-than-the-sum-of-its-parts experience. The last time I genuinely laughed and could not stop was visiting my younger sister’s Animal Crossing island right after the game launched. In spite of the interface’s few emotes and harsh character limits, her weird sense of humor managed to bubble up through the game’s limitations. And those constraints made it more special, for some reason. When I left her island I felt a pang of sadness at leaving her funny little physical manifestation, running circles around my own. It felt different than signing out of a video chat or dropping out of a conversation via text.

These experiences are happening on an individual level, but also a collective one—and people are getting creative. One of the writers from Rogue One just made his own in-game Animal Crossing talkshow, complete with its own tiny guest couch and cityscape view.

A developer in New York even launched a dev conference that took place entirely on an Animal Crossing island. Much like a normal conference, “Deserted Island DevOps” boasted speakers, moderators and even talks to be uploaded to YouTube after the fact.

Plenty of players are using Animal Crossing for more intimate get-togethers too, like celebrating Ramadan and Passover last month or just gathering far-flung friends or family together in one place.

The pandemic is showing us that the sweet spot of mainstream virtual presence might be something more than a Zoom-like video conference but less than a full-on virtual reality experience. Video games, or more specifically video games as platforms, seem to be resonating right now, even among the kinds of people who wouldn’t identify as gamers. That last bit is important.

Epic’s real innovation is its buttery-smooth social layer that seamlessly connects players across platforms. If you can talk a friend into downloading an app, you’re in business. Of course, other games get this right too (Minecraft comes to mind, of course, and others) but timing is everything right now. And Fortnite’s team is cleverly iterating on its already-good ideas.

This week, Epic added a new deliberately chill game mode called Party Royale to Fortnite—a new island just for hanging out with friends. Littered with appropriately zany non-lethal weapons like throwable hamburgers and paintball guns, Party Royale is a designated space where you can take a group and chat while doing mindless yet amusing nonsense, like awkwardly kicking a soccer ball around (I did this with a total stranger for 20 minutes for some reason!) or driving virtual ATVs off virtual precipices.

And like much of Epic’s battle royale hit, the island itself is over-the-top weird, stocked with everything from a pirate ship to a music festival grounds awash in colorful lights, gigantic neon dancers and a very psychedelic vibe, molly not included. There’s even a drive-in movie screen, like another area of the main game, which could signal interesting things to come. If we’re lucky and Epic expands it out, Fortnite’s newest casual online virtual space could evolve into something pretty interesting.

Fortnite is a game ostensibly about killing people before they kill you, but it’s also a concert venue—and that hints at Epic’s deeper ideas about the game as a versatile social platform. The game held its latest big in-game show event last month, this time featuring a skyscraper-height Travis Scott who performed as he stormed around a bucolic-turned-kaleidoscopic version of the Fortnite map. 12 million people tuned in, besting the 10 million who played during the more modest Marshmello in-game EDM show a year prior. Whether you even listen to his music or not, the wildly visually imaginative event was, by all accounts, cool as hell.

Video games should evolve to meet the moment

For anyone who’s spent any time in massively multiplayer online role-playing games (MMORPGs), this will all sound familiar. These games have long, vibrant history of drawing huge numbers of people together into persistent shared virtual spaces and letting them express themselves. Curating outfits, decorating spaces and even making choices around playstyle and faction affiliation are all ways to express aspects of who you are and what you’re about in a virtual world populated by other people doing the same. As someone who played World of Warcraft for years, this was the real appeal of the game for many of us. The game itself—quests, dungeons and the rest—was secondary.

During its peak ten years ago, World of Warcraft had as many active subscribers as players who tuned into the Travis Scott event—12 million. Since then, gaming exploded into the mainstream and by late 2018, Fortnite boasted almost 80 million active players. Online multiplayer itself bounded forward too, mostly through the success of blockbuster first-person shooters—usually grim, well-funded and vaguely or overtly militaristic games that routinely court one kind of gamer. Playful, candy-colored shooters like Fortnite, Splatoon and Overwatch emerged to extend a hand to casual players, even non-gamers, but there’s still plenty of room for online gaming to move beyond shooters.

The wild popularity of Minecraft carved out a path for cooperative gaming not just because building stuff is incredibly fun, though that’s true too, but because doing anything new with friends in a virtual space is really cool. Scrappier games like the incredible No Man’s Sky could do for exploration what Minecraft did for building, but with an indie developer’s budget, big ideas about multiplayer play can only get so far. Historically, the lion’s share of industry resources still get funneled toward reliably profitable military-style shooters. But with the world changing, trends could transform too. Just look at sales of Animal Crossing’s social feng shui sim dominating sales during the first months of the epidemic.

There’s a big opportunity right now for games offering a common social experience that’s magnetic enough to draw in the kind of people who don’t even play games. For those of us stuck at home, imaginative gaming worlds offer not just their usual escape from the moment’s stresses, but a way to share space when we can’t come together.

We just need more of them to visit.

Lenovo brings some unique features to its new gaming phone

Start your own alchemy shop with Potion Party on April 8