Today’s PlayStation Underground episode shows off a couple more exciting pieces of content from Crash Team Racing Nitro-Fueled: a deep-dive into one of our favorite remastered tracks from the game, Dragon Mines, as well as a reveal of the PlayStation-exclusive track, Retro Stadium. Now, I’m happy to give you guys a closer look at each of these tracks.

At Beenox, Dragon Mines has turned out to be one of our favorite tracks in CTR Nitro-Fueled, because we feel it really exemplifies the injection of personality that we’ve tried to put into every facet of the game. Back in the original CTR, Dragon Mines was a fun track from beginning to end, with awesome details of being down in the caves, minecarts whizzing by you, the beautiful glow of the subterranean lake, the giant gears making the whole operation run — racing in this track really enveloped you in the setting. Yet, with ‘90s-era technology, a lot of the heavy lifting had to be done with your own imagination. The pieces were there to help inspire this, but it was really your mind taking the relatively limited detail and creating a beautiful and immersive landscape out of it.

With the tools at our disposal today, we don’t have to rely on imagination, alone, to fill in the gaps. Like all of the other tracks In CTR Nitro-Fueled, we have tried to give Dragon Mines an incredible level of detail and life that will envelop you like it never has before. Aside from the graphical updates and the art direction that went into the 2019 version of the track, a huge part of this process was giving a story to the track. This is something we’ve done with a lot of the tracks for the game — providing context to the detail that we have added. For Dragon Mines, the original track didn’t actually have any dragons in it (although it gets its name from being Komodo Joe’s home track). 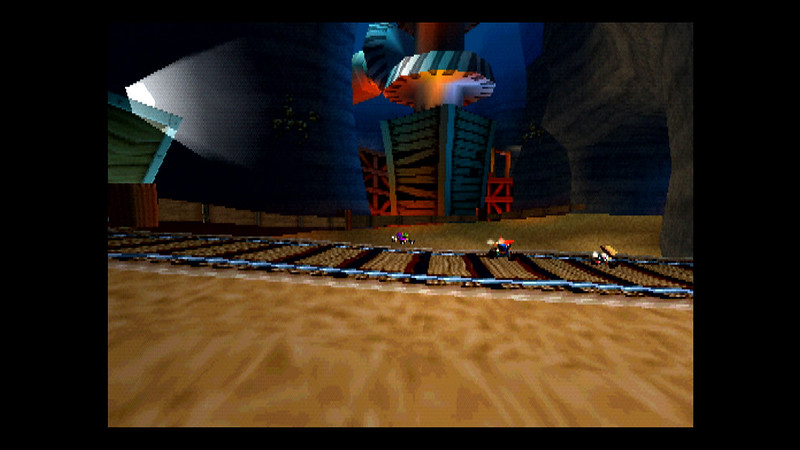 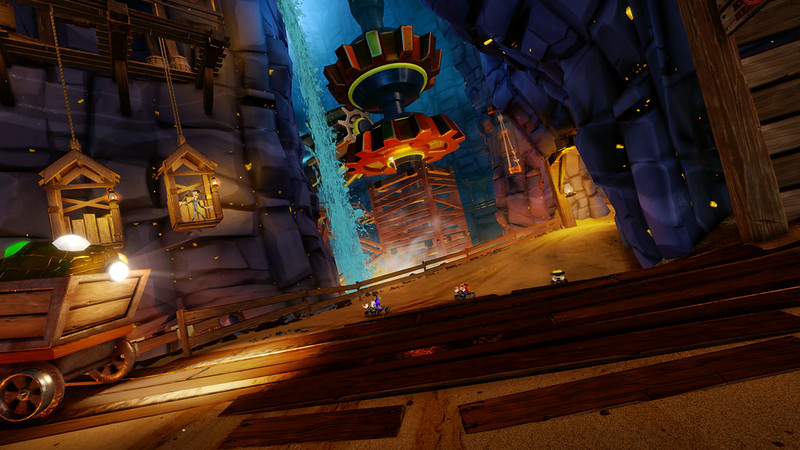 For CTR Nitro-Fueled, we felt it would be fun to bring that element into it. The track’s story is simple: a group of miners have discovered an aging dragon’s treasure deep under the earth and have now built an entire community to harvest the treasure out. Creating this story gave us the direction to start animating a ton of fun details into the track, like miners working to the beat of the music, mischievous rats getting into trouble, and even a slumbering dragon, sitting on what’s left of his treasure, trying to breathe fire on the racers as they pass by (but unfortunately, only mustering a feeble puff of smoke before he loses interest and goes back to sleep).

A miner desperately reaches for a stubborn bat at the starting gate. Another tries to engage in a (literal) game of whack-a-mole while being mocked by a family of them. A whole underground town bustles as the workday goes on. These are just a few more examples of the humor and details we felt would give this track a setting that players would want to re-visit over and over and is also something we wanted to make sure to do across the entire game. It’s worth noting, though, that we also wanted to make sure that the track layout was just as fans remembered from the original.

The turns are the same, the hills are the same — even the shortcut is the same! [As a tip for you readers, when you come across the minecart rails that cross the racetrack at about the halfway point, you can follow them to the right and through the tunnel to gain an extra bit of ground on your opponents. But make sure to go in with a boost, since the minecarts will be hot on your tail!] As with all the remastered and re-imagined tracks in the game, we wanted to give fans a sense of nostalgia while also giving them an environment that will wow them. We feel that Dragon Mines is a perfect example of this. 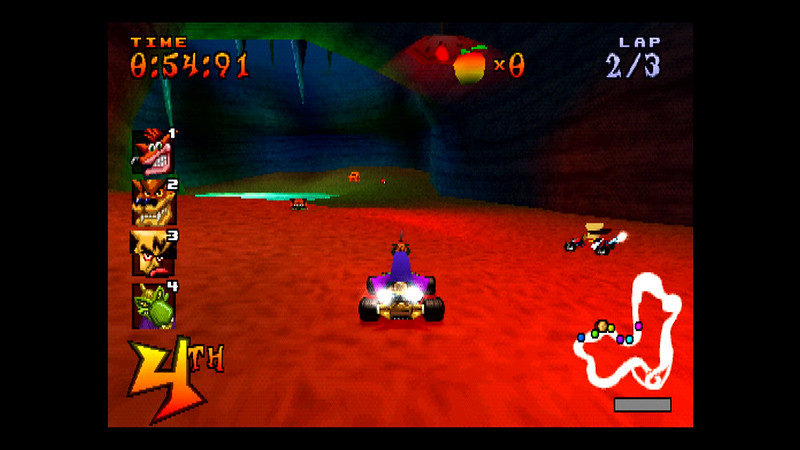 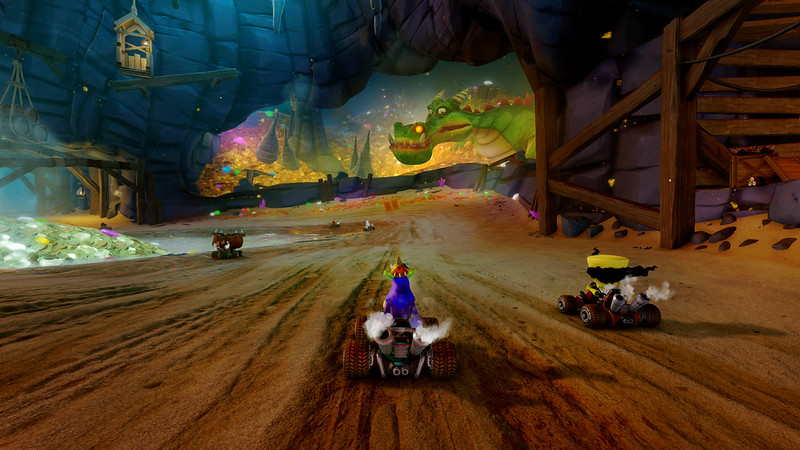 Now, switching gears entirely, I’m excited to talk to you about another track in the game which is on the opposite end of the spectrum in terms of modern-day detail — Retro Stadium. Fully revealed today, this track rounds out the set of retro content offered exclusively to PS4 players of the game. Together with the retro skins for Crash, Coco, and Cortex, and their retro karts, this bonus track brings you back to the days of low-polygons and minimal-pixel textures!

The track is based off the original Turbo Track in CTR, and to create it our team had a lot of fun reversing the mindset we were taking with all the other tracks in the game. While we’ve been spending most of our time seeing how we can bring the original tracks from CTR and CNK into the next stratosphere in terms of graphics and detail, with Retro Stadium we turned off the texture filtering in the level, scaled back details with a “less is more” mindset, and embraced the pixelated look of video games of the late ‘90s. With the high-fidelity qualities that we’ve been putting into all the other tracks in CTR Nitro-Fueled, we felt it would be fun to offer PlayStation players a way to step into the past with this track if they wanted to.

In addition to this, we really did want to make this track an homage to the PS1, and the history of the Crash franchise on the PlayStation platform. The platform and the franchise essentially got their start together and have both created a ton of great memories for me, for all of us at Beenox, and for millions of players across the world. This track is a way to hearken back to the early days of these two gaming icons, and it is simply fun to be able to think back to when graphics like these were blowing you away!

With Dragon Mines and Retro Stadium, we have highlighted two tracks that are polar opposites in terms of graphics and detail, but both of which we have tried to pack with the spirit and fun that CTR Nitro-Fueled is all about. We can’t wait for PlayStation players to try them both out on June 21!

How Santa Monica Studios Nailed Exploration in God of War